Objectives: To determine the incidence of abbreviation use in electronic hospital discharge letters (eDLs) and general practitioner understanding of abbreviations used in eDLs

Design, setting and participants: Retrospective audit of abbreviation use in 200 sequential eDLs was conducted at Nepean Hospital, Sydney, a tertiary referral centre, from 18 December to 31 December 2012. The 15 most commonly used abbreviations and five clinically important abbreviations were identified from the audit. A survey questionnaire using these abbreviations in context was then mailed to 240 GPs in the area covered by the Nepean Blue Mountains Local Health District to determine their understanding of these abbreviations.

Conclusion: Abbreviations used in hospital eDLs are not well understood by the GPs who receive them. This has potential to adversely affect patient care in the transition from hospital to community care.

The transition from hospital to the community is a potentially dangerous time for patients.1 It often involves a change in medical management, with potential for error. Hospital discharge letters aim to facilitate safe transition of patients into the community. To be effective, discharge letters must reach the general practitioner in a timely manner and contain easily understandable information. These are essential ingredients in effective continuity of care.

Deficits in discharge letters can contribute to a failure of information transfer. Studies have found high rates of omissions and errors in such letters.2-4 This contributes to errors in care after discharge. One study found that 49.5% of patients discharged from a large academic medical centre experienced at least one medical error relating to change of care on discharge.2

In this article, we focus on the potential danger of using abbreviations (shortened forms of words or phrases5) in medical communication. Abbreviations used in medical communications are either acronyms or initialisms. Acronyms use the initial letters of words and are pronounced as words (eg, ASCII, NASA); initialisms use initial letters pronounced separately (eg, BBC).5 Abbreviations are commonly used in medical specialties, but may not be understood by the broader profession. Doctors are under pressure to complete discharge letters in a timely fashion, and abbreviations may be used to facilitate this process.

We identified few published studies of the frequency of abbreviations in discharge letters.6,7,8 Some reported that abbreviation use is increasing and identified this as a concern. A recent audit at Royal Melbourne Hospital reported that 20.1% of all words in discharge letters were abbreviations.8 Another study audited abbreviation use in inpatient medical records and surveyed members of an inpatient multidisciplinary team for their understanding of abbreviations.9 The mean correct response rate was 43%, with Postgraduate Year 1 doctors posting the best scores (57%) and dietitians posting the worst (20%).

However, we identified no published studies determining whether the abbreviations used in hospital discharge letters are understood by GPs, who are usually the recipients of discharge letters.

We retrospectively analysed 200 electronic hospital discharge letters (eDLs) of patients discharged from Nepean Hospital, Sydney, a tertiary referral centre, from 31 December 2012, working backwards to 18 December 2012. We stopped at this point because few new abbreviations were being identified. To be included in the audit, an eDL had to be addressed to a GP.

We chose 31 December to begin the analysis to provide a representative sample of junior doctors who had a minimum of almost a year of hospital experience.

The meaning of each abbreviation was inferred from the surrounding text, and abbreviations were categorised as shown in Box 1.

To provide adequate precision, we aimed for 100 GP responses. The survey was mailed to all 240 GPs listed in the 2014 edition of the Medical Practitioners’ Directory for the Nepean, Blue Mountains and Hawkesbury areas. This was the most extensive directory of GPs in this area available to us. Responses were returned in a coded envelope inside a postage-paid envelope. GPs who did not respond were resent surveys on up to two additional occasions.

Survey responses were analysed to determine what proportion of GPs understood each abbreviation.

The frequency of incorrect interpretation of all abbreviations in the survey is shown in Box 3. Box 4 shows the range and frequency of individual GP scores.

The results of our survey show that there is poor understanding among GPs of abbreviations used in hospital discharge letters. The response rate to our survey was fair, so our results are likely to be representative of GPs in the area.

Our study has some limitations. Non-responding GPs might have scored differently on the survey compared with those who responded. Also, we did not ascertain GP demographic characteristics such as length of career outside the hospital setting. GPs with more recent hospital practice may better understand these abbreviations. In addition, we could not assess GPs’ understanding of most abbreviations we identified in the eDL audit because of the large number identified. However, we expect that understanding of these less frequently used abbreviations would be poorer than for the 20 we included in our survey. Also, this study was conducted in a single centre, so the results may not be generalisable to other centres. However, junior doctors are drawn from many universities and it is likely that discharge practices are similar in other hospitals. 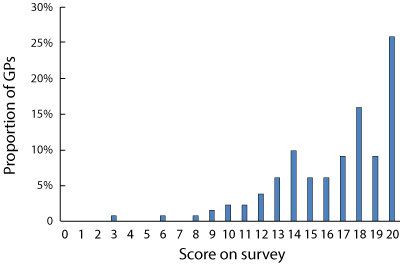 We thank Kristy Mann and Andrew Martin, biostatisticians from the National Health and Medical Research Council Clinical Trials Centre, for their contributions and statistical advice. Funding for postage of the surveys was provided by the Endocrinology Department at Nepean Hospital.

IMHO ED D/C req. docu re Ix, Tx and DD incl FOOSH, PEARL, FOB, DRE, ED 'n ENT PND.
We could of course just talk and write out what is important like they did in the olden days but OMG, LOL, gotta go, don't have time for that.

I am interested that you find "there is a deficit in GP understanding of abbreviations used in hospitals". I would have felt it would be more accurate to say that the letters themselves are deficient, not the GP!