The challenges of early diagnosis of cancer in general practice

Managing missed opportunities when most cancer symptoms are only weakly predictive

The incidence of cancer in Australia is rising due to an ageing population and increased detection of certain cancers through screening. In 2012, an estimated 120 000 Australians were diagnosed with cancer, not counting basal and squamous cell skin cancers.1 Most cancers present symptomatically, even those for which there are national screening programs. In Australia, and other countries with strong primary health care systems, 75%–85% of cancers first present in general practice as a result of symptoms. General practitioners therefore play a key role in the early detection of cancer.2

Intuitively, diagnosing cancer early should be beneficial. Indeed, perception of a missed diagnosis of cancer is a leading cause of medicolegal complaints in primary and ambulatory care, on the assumption that harm occurred as a result of diagnostic delay.3 There is ongoing debate about the value of early cancer detection in asymptomatic populations through screening tests. At the same time, proving that earlier detection of symptomatic cancer “matters” is also epidemiologically challenging. The waiting time paradox describes the phenomenon in which patients with late-stage cancers present with severe symptoms and are therefore diagnosed promptly but have poorer outcomes.4 This is an important source of bias in studies examining the effect of time to diagnosis on outcomes in symptomatic cancer populations. However, a recent systematic review has found that shorter time to diagnosis was associated with better outcomes in symptomatic populations; the strongest evidence was for melanoma, breast, colorectal, head and neck, and testicular cancer.4

So-called delays in cancer diagnosis can occur due to patient, health care provider and health system factors.5 Research from the United Kingdom and Australia shows that major contributors to the overall time to diagnosis occur both before a patient presents with symptoms to a doctor and their subsequent management in general practice. For most cancers, the patient interval (time from developing a symptom to seeing a doctor) is longer than the primary care interval (time from presentation to the GP to referral for specialist management).6 This is the rationale behind cancer symptom awareness campaigns aimed at promoting earlier presentation to health care. Nonetheless, many patients with cancer will have multiple visits to their GP before a diagnosis is made; this is particularly so for certain cancers such as myeloma, pancreatic, gastric and lung, suggesting that some cancers are harder to diagnose in primary care than others.7 This may also reflect a degree of therapeutic nihilism, in which doctors assume there is little to be gained from early diagnosis of some cancers and so may not refer as promptly.

One of the most significant reasons is that doctors may simply not consider cancer in their differential diagnoses. A full-time GP will only see five to 10 new cases of non-cutaneous cancer among several thousand consultations per year. This low prevalence of cancer in primary care means that even red-flag cancer symptoms have low positive predictive values. Only a few symptoms, such as haemoptysis, breast lump and haematuria, have > 5% chance of being due to cancer in primary care.9 Most symptoms of cancer have more common benign causes in general practice. Further, cancers in general practice often present initially with more subtle non-specific symptoms. In a large prospective cohort study, only 22% of patients with lung cancer first presented with haemoptysis, but this was the only symptom significantly associated with a final diagnosis of lung cancer.10 Doctors also experience a range of cognitive biases which affect their decision making. For example, over-relying on a single element of the history (anchoring bias), only seeking evidence from the history that agrees with the initial impression (confirmation bias) and overweighting elements of the history based on recent similar cases (availability bias).

From a systems perspective, missed opportunities can occur for a variety of reasons. For example, excessive workloads can lead to shorter consultation times and potentially incomplete clinical assessment or failure to follow-up abnormal test results. Safety netting is increasingly recognised as an important aspect of quality care in reducing potential diagnostic delay. This means that GPs should explain to patients when to return if their symptoms persist or if they develop new symptoms.

Later cancer diagnosis can also occur as a result of limited access to diagnostic tests or the use of the wrong test. In Australian general practice, there is relatively good access to a wide range of pathological and radiological investigations, but access to other key tests, such as gastrointestinal endoscopy, is more problematic, especially in public hospitals. This imbalance risks GPs ordering tests that are most accessible rather than most appropriate. The recently launched Choosing Wisely initiative specifically recommended against the use of serum tumour markers as a diagnostic test in people with suspected cancer, because of their low sensitivity and specificity (http://www.choosingwisely.org.au/recommendations/rcpa). In the UK, new guidance from the National Institute for Health and Care Excellence recommends use of faecal occult blood testing in people with low-risk bowel cancer symptoms as a cost-effective alternative to either colonoscopy or computed tomography colonography (https://www.nice.org.uk/guidance/ng12).

Research using routine general practice data has helped to inform our understanding of the epidemiology of cancer symptoms in primary care. As a result, we can now estimate the likelihood of cancer based on a patient’s combinations of symptoms, signs and baseline risk factors.2 This is more sophisticated than the traditional red-flag single-symptom approach to prompt consideration of a cancer diagnosis. Arising from this research are risk assessment tools (RATs) such as the charts developed by Hamilton and colleagues11 (Box 1) and the QCancer model of Hippisley-Cox and Coupland.12 These tools could support GPs to assess patients’ symptoms more accurately and identify those who require more urgent investigation or referral. They should also inform Australian guidelines on early cancer diagnosis and could potentially support triage of referrals. In the UK, these tools have been integrated into GP computing systems and are currently being widely disseminated. But there is limited evidence on how GPs will use such tools or what impact they will have on diagnostic decision making.

A study exploring Australian GPs’ use of a QCancer tool (Box 2) in simulated consultations found several challenges. GPs found the tool difficult to introduce into the workflow of the consultation, were distrustful of the risk output compared with their own clinical judgement, and varied symptom interpretation meant that there was significant variation in risk assessment, even with standardised consultations.13 A cluster randomised controlled trial of implementing the Hamilton RATs in rural Western Australia is due to report later this year and will provide further evidence on the utility of such tools.14

The complex nature of the Australian health care system means that diagnostic pathways for patients with suspected cancer are not always clear. Several states have developed recommended cancer diagnostic and treatment pathways in recognition of this problem, some with maximum recommended intervals along the pathway. Cancer Australia has produced national guidelines aimed at general practice for the assessment of patients with suspected breast, ovarian and lung cancer.15 However, as with all practice guidelines, they need a significant and sustained effort to ensure that they are used in general practice. A report for the Sax Institute recommended establishing fast-track referral pathways, initially for colorectal and lung cancer.16 This was based on evidence from the 2-week wait referral initiatives in the UK, in which patients meeting symptom-based criteria were fast-tracked for an outpatient assessment for suspected cancer; an approach that was associated with significant reductions in diagnostic intervals for several cancers.17 Piloting of fast-track pathways for specific cancers is occurring in Victoria and New South Wales.18

General practice can make important contributions to improving cancer outcomes through early recognition and investigation of patients most likely to have the disease. As gatekeepers, GPs must balance the risk of later diagnosis against overinvestigation of patients who are unlikely to have cancer, with resultant costs to the patient and to the health care system, and potential harms from invasive tests including overdiagnosis of incidental low-risk cancers. Over-referral of low-risk patients can extend waiting times for diagnostic tests (eg, gastrointestinal endoscopy in public hospitals) and potentially delay diagnosis in those who do have cancer.

Further research is required on how best to apply the epidemiological evidence about the predictive value of symptom clusters in general practice, through the implementation of risk tools or fast-track referral pathways. General practices should consider conducting significant event audits of new cancer diagnoses to reflect on potential missed opportunities for earlier diagnosis. Such audits could inform practice system improvements in ensuring adequate follow-up of abnormal tests and safety-netting patients with persistent symptoms, both of which could contribute to earlier cancer diagnosis in general practice.

Box 1 – Reported positive predictive values for colorectal cancer for individual features, repeat presentations and for pairs of features (in the context of a background risk of 0.25%)∗ 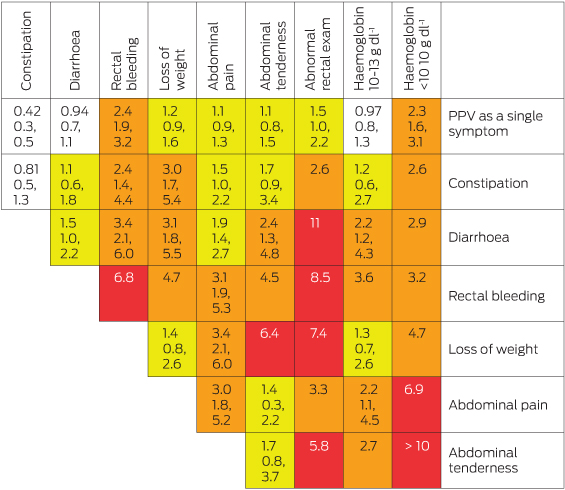 The top row shows the positive predictive value (PPV) for an individual feature. The cells along the diagonal relate to the PPV when the same feature has been reported twice. Thus, the constipation/constipation intersect is the PPV for colorectal cancer when a patient has attended twice (or more often) with constipation. Other cells show the PPV when a patient has two different features. The top figure in each cell is the PPV. It has only been calculated when a minimum of 10 cases had the feature or combination of features. The two smaller figures are the 95% confidence intervals for the PPV. These have not been calculated when any cell in the 2 × 2 table was below 10. For haemoglobin levels < 10 g/dL with abdominal tenderness, no controls had this pair. It was scored as a PPV of > 10%. The yellow shading is when the PPV is > 1%. The amber shading is when the PPV is > 2.5%, which approximates to a risk of colorectal cancer of 10 times normal. The red shading is for PPVs > 5.0%, approximating to a risk of 20 times normal. 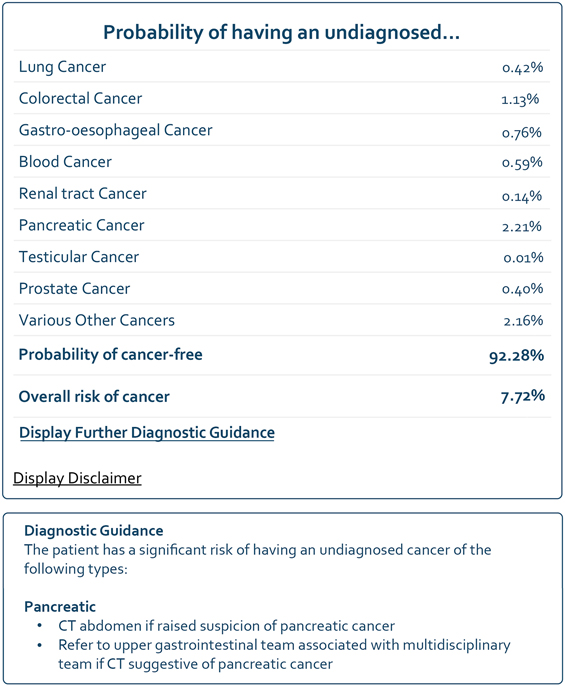 ∗Reprinted by permission from Macmillan Publishers Ltd on behalf of Cancer Research UK: Chiang et al.13 †Information in these screenshots should not be used as diagnostic advice.