Objective: To determine the effect of cosmetic breast augmentation on subsequent infant feeding.

Conclusions: Reduced rates of breast milk feeding among women who have undergone breast augmentation underscore the importance of identifying, supporting and encouraging women who are vulnerable to a lower likelihood of breastfeeding.

Breastfeeding is beneficial for infants and their mothers. It protects against diarrhoea, respiratory tract and other infant infections, atopic dermatitis, asthma, obesity, diabetes and cancer.1,2 Although exclusive breastfeeding achieves optimal infant growth and development, the World Health Organization recognises that providing some breast milk to the infant is better than none.3 For mothers, breastfeeding has a contraceptive effect, and reduces the risk of type 2 diabetes, breast cancer and ovarian cancer.1

Cosmetic breast augmentation is the most common plastic surgical procedure, and its use is rising dramatically. In Australia, this surgery increased by 150% between 2001 and 2011.4 In the United States, the estimated increase for this period was 45%, although this followed a 550% increase from 1992 to 2000.5 In the United Kingdom, rates increased by 200% from 2005 to 2013.6 In this article, cosmetic breast augmentation (or breast implants) refers to procedures that change the size, shape and texture of healthy breasts. This is distinct from reconstructive breast augmentation, such as following mastectomy.

Although most cosmetic breast surgery occurs among women of reproductive age, there has been little research into pregnancy outcomes, including breastfeeding. A systematic review of breastfeeding outcomes associated with cosmetic breast augmentation surgery identified only three small, observational studies.7 One study reported reduced rates of any breastfeeding among women with breast augmentation, while meta-analysis of all three studies suggested a reduced likelihood of exclusive breastfeeding (pooled rate ratio, 0.60; 95% CI, 0.40–0.90).7 The authors recommended that studies using larger cohorts and more representative study populations be used to explore the observed association.

The study population was derived from the 391 979 women who gave birth in New South Wales from 1 January 2006 to 31 December 2011 (Box 1). As our intention was to examine the effect of cosmetic breast augmentation, women with breast cancer, mastectomy, breast reconstruction or other breast surgery before giving birth were excluded (n = 3831; Box 1 and Appendix 1). The remaining 388 148 women had 506 942 births. The first birth in the study period or the first birth after breast augmentation surgery was used in the primary analysis.

Data for the study were obtained from two linked population health datasets: the NSW Perinatal Data Collection (PDC; referred to as birth records) and the NSW Admitted Patient Data Collection (APDC; referred to as hospital records). The PDC is a statutory surveillance system of all births in NSW of at least 20 weeks' gestation or at least 400 g birthweight. Information on maternal characteristics, pregnancy, labour, delivery, and infant outcomes are recorded by the attending midwife or doctor. The APDC is a census of all NSW inpatient hospital discharges from both public and private hospitals, and day procedure units, and includes demographic and episode-related data. Diagnoses and procedures are coded for each admission from the medical records according to the International Classification of Diseases, 10th revision, Australian modification (ICD-10-AM) and the Australian Classification of Health Interventions.8

Hospital records for individual women were linked cross-sectionally to birth records from 2006 to 2011 and longitudinally (from July 2000 to December 2011). Thus, the minimum lookback period for prior breast surgery ranged from 5.5 to 11.5 years. Record linkage was undertaken by the NSW Centre for Health Record Linkage (CHeReL). For this study, the CHeReL reported the quality of the record linkage9 as 3/1000 false-positive links. We were provided with anonymised data. Ethics approval for the study was obtained from the NSW Population and Health Services Research Ethics Committee.

Breastfeeding information at discharge has been collected in birth records since 2006. One or more of the following three options can be reported in tick-boxes: “breastfeeding”, “expressed breast milk” or “infant formula”.

To avoid confounding by factors likely to be associated with reduced breastfeeding,14,15 regression analyses were limited to women who had a singleton infant with no major congenital anomalies and born at term (≥ 37 weeks). Crude and adjusted relative risks (RRs) with 95% confidence intervals were estimated for characteristics likely to be associated with breastfeeding.

Breast milk feeding outcomes were then assessed among 341 953 singleton infants with no major congenital anomalies born at term. Compared with women without, women with breast augmentation had reduced likelihood (adjusted RR, 0.90; 95% CI, 0.87–0.93) of feeding their infant with any breast milk at the time of discharge from birth care. Factors controlled for that were positively associated with breast milk feeding included: older maternal age, non-Australian-born, high socioeconomic status, nulliparity, non-smoker, no obstetric interventions, and longer hospitalisation after birth (Appendix 2). Women with breast augmentation in the 2 years preceding birth had similar rates of any breast milk feeding to women with a longer period since breast surgery (77% v 81%; P = 0.17).

Uptake of breast augmentation surgery is increasing, with 8000 Australian, 10 000 British and 307 000 American women undergoing the procedure in 2011.4-6 We found that 79% of these women can be expected to breast milk feed at discharge, compared with 89% of women without surgery. As maternity care affects breastfeeding success,2 these findings underscore the importance of identifying, supporting and encouraging all women who are vulnerable to a lower likelihood of breastfeeding.

Lower breastfeeding rates may reflect maternal and family attitudes and expectations, may be a consequence of surgery, or the breast implants may reduce the ability to lactate. Although a variety of health outcomes have been investigated among women who have silicone breast implants, and their breast milk fed infants, epidemiological studies have not substantiated links with adverse outcomes.18-21 Nevertheless, women with breast implants may fear transmitting silicone or other breast implant materials into breast milk. They may also fear, or have been told by their surgeon, that breastfeeding could undo a satisfactory augmentation result. Another explanation is that lactiferous ducts, glandular tissue or nerves of the breast are damaged during surgery, or by pressure from the implants on breast tissue.22 Furthermore, complications of the surgery including capsular contracture, haematoma formation, infection or pain may reduce the ability or desire to breastfeed.22 Future qualitative research is needed to better understand why women with prior breast augmentation are less likely to breastfeed.

Our findings of reduced rates of any breastfeeding are consistent with the only study that reported rates of any breastfeeding after augmentation among women who attempted breastfeeding.16 However, the latter study reported a stronger effect at 2 weeks postpartum (RR, 0.67; 95% CI, 0.50–0.91). In contrast, our findings differ from the systematic review of three small studies, which found women with breast implants who breast milk fed were less likely to exclusively breastfeed.7 We believe our whole-population findings are more robust. The previous studies had selected populations (eg, lactation referral clients) and variable end points (eg, exclusive breastfeeding, insufficient lactogenesis), used historical controls and made limited attempts to control for potential confounders.7 However, it is possible that differences in the rates of exclusive breastfeeding may become apparent after discharge, as follow-up in the three studies was longer (minimum 2 weeks postpartum).

A strength of our study is the use of recent, large, linked population health datasets that include a third of all births in Australia. Breastfeeding information is reported by a midwife, and previous validation studies show events occurring around birth or immediately postpartum are well reported.12 Longitudinal record linkage allowed the ascertainment of cosmetic breast augmentation surgery. Although a longer lookback period may have increased case ascertainment,23 some missed cases among a population of more than 300 000 women without breast augmentation are unlikely to change the findings. Similarly, women who have cosmetic surgery overseas or interstate are not captured in this study. Identification of breast augmentation surgery in routinely collected data has not been evaluated but, in general, surgical procedures are reliably identified in hospital discharge data, and other breast surgery, such as mastectomy, is accurately reported (sensitivity, 97%; positive predictive value, 97%).12,24

Another strength is that breastfeeding was assessed at the same time for both exposed and unexposed women, unlike prior studies.7 The 89% breastfeeding rate at discharge in our study is similar to the rate reported in the Australian National Infant Feeding Survey (90.2% for < 1 month).25

An absolute rate of one in five women with breast augmentation who subsequently give birth may be unable or unwilling to breast milk feed their infants. This information should be provided as part of informed decision making to women contemplating breast augmentation surgery. 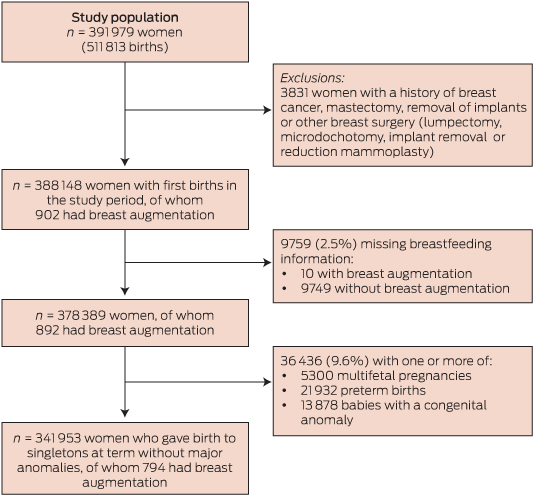 This work was supported by an Australian National Health and Medical Research Council (NHMRC) Centre for Research Excellence Grant (1001066). Christine Roberts is supported by an NHMRC Senior Research Fellowship (APP1021025) and Amanda Ampt is supported by the Dr Albert S McKern Research Scholarship. We thank the NSW Ministry of Health for access to the population health data and the CHeReL for linking the datasets. Jian Sheng (Charles) Chen died just after the completion of this project, and we intend this work to be a tribute and a further example of the extraordinary contribution his work has made to the analysis of linked health data.