Mapping the diagnosis of autism spectrum disorders in children aged under 7 years in Australia, 2010–2012

Objectives: To investigate the frequency and age at diagnosis of autism spectrum disorder (ASD) in children aged under 7 years living in Australia.

Design and participants: Analysis of de-identified data on 15 074 children aged under 7 years registered with the Helping Children with Autism Package (HCWAP; a program that provides funding for access to early intervention and support services throughout Australia) between 1 July 2010 and 30 June 2012.

Main outcome measures: Age at diagnosis of ASD as confirmed by a paediatrician, psychiatrist and/or multidisciplinary team assessment.

Conclusions: There may be a substantial gap between the age at which a reliable and accurate diagnosis of ASD is possible and the average age that children are currently diagnosed. The frequency of ASD diagnoses in Australia has increased substantially from previously published estimates.

The early diagnosis of children with autism spectrum disorder (ASD) is a critical step in gaining access to early intervention, providing optimal opportunity for developmental benefits by taking advantage of early brain plasticity.1 The age at which intervention begins has been associated with improved outcomes, with younger children showing greater gains from intensive early intervention.2,3 Although research suggests ASD can be reliably diagnosed by the age of 24 months,4,5 a recent review found that, on average, diagnosis is delayed until 3 years, with the average age at diagnosis ranging from 38 to 120 months across 42 studies conducted across the United States, United Kingdom, Europe, Canada, India, Taiwan and Australia.6

There are limited data on the age and frequency of ASD diagnoses across all states and territories in Australia which, given the ethnically diverse and geographically dispersed population, would provide an important national and international comparison.

In this study, we sought to establish the age at which children registered with the Helping Children with Autism Package (HCWAP) in Australia currently receive a diagnosis. We also investigated trends in diagnosis across states, regional and rural areas, and child characteristics. Diagnostic groups within the autism spectrum, as specified in the fourth edition of the Diagnostic and statistical manual of mental disorders (DSM-IV),7 as well as the combined ASD group (consistent with fifth edition of the DSM8) were examined, to facilitate comparisons over time.

We used de-identified data on 15 074 children (12 183 boys [81%] and 2891 girls [19%]) who received support through the HCWAP between 1 July 2010 and 30 June 2012. Data were collected and managed by the former Australian Government Department of Families, Housing, Community Services and Indigenous Affairs (FaHCSIA; now the Department of Social Services). To be eligible for the HCWAP, children must be Australian residents, aged under 7 years and have a documented diagnosis of ASD consistent with DSM-IV criteria from a paediatrician or psychiatrist, or after a multidisciplinary team assessment (involving a psychologist and speech pathologist).

The database contained the following information: age at diagnosis (months), state and postcode of residence, diagnosis, sex, Aboriginal and Torres Strait Islander status and culturally and linguistically diverse (CALD) status. The postcode was used to match age at diagnosis to geographical and population data.

Children's age at diagnosis was calculated by subtracting their date of birth from the month and year that their diagnosis was confirmed, and rounded to the closest month.

The Accessibility/remoteness index of Australia (ARIA), developed by the Australian Bureau of Statistics, is a measure of remoteness, aggregated into the following categories: major cities; inner regional; outer regional; remote; very remote and migratory.

The numbers of children at each year of age under 7 years (obtained from Australian Bureau of Statistics estimates) were summed and averaged over the period of 30 June 2010 to 30 June 2012 to create population estimates aligned to the study period and age group.

We conducted non-parametric comparisons (Kruskal–Wallis and Mann–Whitney U-Tests) because age at diagnosis for the study population was not normally distributed, and sample size varied across groups. Bonferroni adjustments controlled for multiple comparisons, and a conservative α (P < 0.01) was adopted.

Mapping the average age at diagnosis of ASD in children registered with the HCWAP across Australia showed small but significant differences between states (χ2 = 146.69; df = 7; P < 0.001; ɳ² = 0.01). To reduce the number of post-hoc comparisons, states were grouped into logical clusters by ascending age at diagnosis. There were significant differences in age at diagnosis between these clusters of states, with children registered with the HCWAP in Western Australia and New South Wales diagnosed earlier than in other states (Box 4).

On the basis of HCWAP data, 0.74% of children aged under 7 years in Australia (72/10 000) were diagnosed with ASD between 2010 and 2012. Case ascertainment rates were calculated to determine if differences could be attributed to the number of children at an eligible age. Using 95% CIs, state-level differences were evident, with the highest ascertainment rate in Victoria and lowest in the Northern Territory (Box 4). Differences were also evident between states across diagnostic subgroups; using 95% CIs, a smaller proportion of children than expected with AspD were diagnosed in WA, Tasmania and the NT compared with other states (Appendix 1).

Age at diagnosis by remoteness

Age at and frequency of diagnosis by child characteristics

The average age at diagnosis of ASD in children aged under 7 years registered with HCWAP is 49 months, with the most frequently reported age being 71 months. Given that research suggests a reliable and accurate diagnosis is possible for many children with ASD at 24 months,4,5 this finding represents a possible average delay of 2 years (and common delays of up to 4 years).

The increase in frequency of ASD diagnoses at 6 years of age may be attributable to children's ASD being identified when they enter school, aged about 5 years, and the associated delay for diagnostic assessments. The end of the eligibility period for funding through the HCWAP (at age 7) may also contribute to the increase in diagnoses at 6 years of age. Further, there may be a subgroup of children who are diagnosed later because of factors in their clinical presentation, such as comorbid conditions or the presentation being less severe.

Delays of 3 to 6 months in age at diagnosis were evident between states, which may be clinically meaningful if they translate into equivalent delays in access to early intervention and family support services. Local differences in age at diagnosis have also been reported in the UK,17 US18 and Canada;19 suggesting that characteristics of local health care systems play a role in determining diagnostic timing.

Case ascertainment rates indicate that a larger proportion of children with ASD were identified in Vic and less than half of the expected children with ASD were identified in WA, the ACT and NT. There are many possible reasons for these differences, including the uptake of HCWAP across states, diagnostic substitution, and/or a greater tendency to diagnose ASD after the age of 7 years.

Children were diagnosed earlier in major cities compared with regional Australia. This is consistent with international research and probably the result of reduced access to health services.17,20,21 The possible earlier diagnosis of children in remote areas compared with major cities may reflect longer waiting times for specialist services in highly populated areas.22

A few limitations should be noted. The exclusion of children aged 7 years and over (in accordance with HCWAP eligibility) may have resulted in an underestimation of the age at diagnosis of ASD in Australia. The dataset only included families who registered to receive funding through the HCWAP. Although this is the most complete dataset currently available in Australia, it is possible that some cases were missed as families either chose not to register or were unaware of the HCWAP. Also, we were not able to confirm the reliability of diagnoses.

Despite these limitations, this study provides an important examination of trends in the diagnosis of ASD and suggests there may be a substantial gap between the age at which a reliable and accurate diagnosis is possible and the average age at which ASD is diagnosed in Australia. Future research should examine this gap, and investigate barriers that delay the diagnosis of ASD to ensure that families and communities can benefit from best-practice approaches to early intervention. 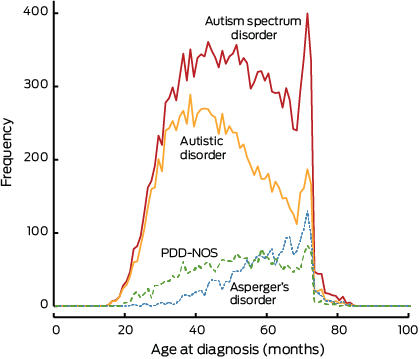 I congratulate the authors on their work. However I miss explicit mentioning of the effects of child abuse in the context of ASD. The article's referenced papers highlight the importance of differential diagnosis to an ASD diagnosis in children below the age of 7. This is notwithstanding the early work of John Bowlby (1) nor the work on Romanian orphans (2). The former is quintessential for attachment theory and the latter for the effects of trauma presenting as a triad of difficulties with social interaction, communication and behaviors, in other words complex developmental trauma. Substantiated childhood abuse in Australia is prevalent at 53666 in 2012- 2013 (3) and a not insignificant number of children will present as if ASD.

References:
1.) J Bowlby The making and breaking of affectional bonds. I. Aetiology and psychopathology in the light of attachment theory. An expanded version of the Fiftieth Maudsley Lecture, delivered before the Royal College of Psychiatrists, 19 November 1976. The British Journal of Psychiatry Mar 1977, 130 (3) 201-210; DOI: 10.1192/bjp.130.3.201

In response to Dr Beckmann's comment: "I miss explicit mentioning of the effects of child abuse in the context of ASD". The paper was not set up to address this issue, but rather used HCWA data to map the age of ASD diagnoses in Australia.

Prof. Rutter's and others work in on the Romanian orphans showed that despite some initial similarities with ASD features, the children who suffered neglet/abuse did not meet criteria for ASD, and the ASD features present mostly resolved once the children were placed in enriched environments.

With respect to attachment and John Bowlby, much work, including my own, has shown that children with ASD are attached to their caregivers/parents, and these attachments are functionally similar to those in children without ASD.