A 60-year-old HIV-negative woman presented with a week's history of fever, vomiting and confusion, followed by progressive personality change. On admission, she was noted to have urinary retention, left oculomotor nerve palsy and an upgoing right plantar response. A magnetic resonance image (MRI) of the brain showed leptomeningeal enhancement with gyral swelling and subtle cortical T2 signal hyperintensity in the right frontal lobe, suggesting meningoencephalitis. Cerebrospinal fluid (CSF) cultures grew fully susceptible Mycobacterium tuberculosis. Antituberculous therapy was started with isoniazid, rifampicin, ethambutol and pyrazinamide, plus dexamethasone. CSF cultures tested negative by Week 1. Over the next month, she had ongoing fevers and fluctuating conscious state. High CSF pressures necessitated ventriculoperitoneal (VP) shunting. An MRI 3 months into therapy showed numerous granulomas, microabscesses and infarcts. Her condition failed to improve with a further course of dexamethasone, and an MRI at 5 months showed increasing size and number of granulomas, with worsening oedema and midline shift (Figure 1, A). She was given a trial of three doses of infliximab 10 mg/kg, 1 month apart, resulting in marked improvement in neurological status and radiological findings (Figure 1, B). She regained movement of her limbs, opened her eyes spontaneously and was able to articulate a few words. After completing 2 months of four-drug therapy, she received isoniazid and rifampicin for 10 months, with ongoing improvement. She was left with mild cognitive deficit and required some assistance with activities of daily living.

A 32-year-old HIV-negative woman presented with delirium and back pain. A chest radiograph suggested miliary tuberculosis. A computed tomography brain scan was unremarkable. Results of CSF molecular testing were positive for M. tuberculosis complex, and cultures from CSF, blood and a laryngeal swab grew fully susceptible M. tuberculosis. Isoniazid, rifampicin, ethambutol, pyrazinamide and prednisolone 50 mg were commenced. One month into therapy, she developed headache in the context of weaning from prednisolone. An MRI showed multiple rim-enhancing nodules in the CSF spaces, with leptomeningeal enhancement and enhancing lesions in the right cerebellum and hemipons. CSF cultures tested negative.

The prednisolone dose was increased to 60 mg, with little response, then converted to dexamethasone 12 mg/day. One month later, while steroid tapering, she developed diplopia. An MRI showed worsening tuberculomas with increasing oedema (Figure 2, A). Dexamethasone was reinitiated at 12 mg/day. Three months into therapy, she developed obstructive hydrocephalus requiring VP shunting. Over the following weeks, she developed peripheral visual field loss. After 4 months of tuberculosis therapy, a trial of infliximab 5 mg/kg was initiated. The steroid dose was tapered over the next week without worsening of symptoms, and she was discharged. One month later, an MRI showed moderate improvement (Figure 2, B). Two further doses of infliximab were given over the subsequent 6 weeks, with complete resolution of visual symptoms. She completed 2 months of four-drug therapy, followed by 10 months of isoniazid and rifampicin. The course was complicated by a seizure at Month 8, necessitating antiepileptic therapy, but she made an otherwise full neurological recovery. 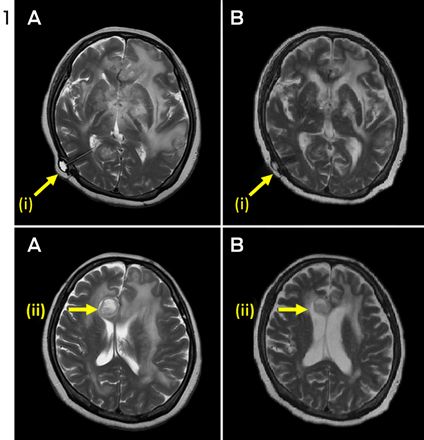 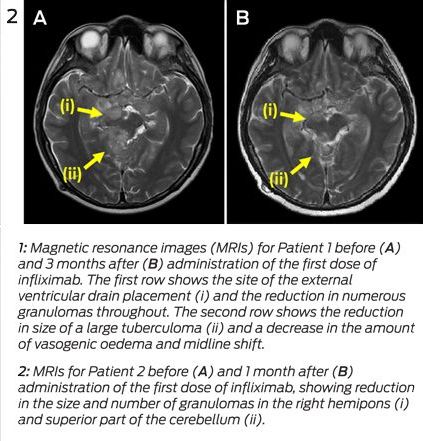 A paradoxical reaction (PR) in tuberculosis (TB) is the worsening of disease after starting TB therapy, usually despite microbiological response. It may represent an inflammatory response to the release of antigen from dying bacilli.1 Such disease exacerbation has also been observed in people with HIV when antiretrovirals are started,2 and in individuals with TB when tumour necrosis factor alpha (TNF-α) antagonists are discontinued.3 A PR may manifest with new pulmonary lesions or lymphadenopathy3 and can be life-threatening, especially in patients with neurotuberculosis.1 Management involves high-dose corticosteroids, but in intractable cases success has been reported with TNF-α blockade.1,3-5

Our two patients had severe neurotuberculosis PRs unresponsive to dexamethasone, which abated after administration of the anti-TNF-α antibody infliximab. Before these two cases, there was only one report of therapeutic use of infliximab for TB PR in an individual without prior history of TNF-α antagonist use.1 Our two cases add weight to this approach being safe and effective in patients with steroid-refractory TB PR. The previously reported patient had steroid-refractory neurotuberculosis that did not respond to a trial of cyclophosphamide. Radiological and neurological parameters improved only after infliximab was given.1 In that case and ours, cultures tested negative soon after antituberculous therapy was started, suggesting that ongoing disease was due to an immunologically mediated PR rather than inadequate microbiological control.

These cases highlight the potentially devastating effects of central nervous system (CNS) TB, which, despite contemporary therapeutic approaches, still results in permanent disability or death in half of those treated.6 Much of this morbidity can be attributed to the inflammatory response. A key inflammatory cytokine is TNF-α, which plays an integral role in granuloma formation to contain TB infection. However, in mouse models of neurotuberculosis, TNF-α has been shown to increase blood–brain barrier permeability, resulting in increased CSF leukocytosis and CNS inflammation.7

Attenuation of the inflammatory response with routine administration of corticosteroids in patients with neurotuberculosis has been shown to reduce mortality.6 However, in cases of PR, outcomes are often poor despite steroids. There is growing evidence that medications with anti-TNF-α activity may have a role in controlling this inflammatory response, without compromising microbiological response.1,3-5

Thalidomide, a potent TNF-α inhibitor, was administered to two patients with steroid-refractory neurotuberculosis, with apparent improvement.8 While also showing promise in rabbit models and a small pilot study, it was poorly tolerated and failed to show clinical benefit when used as adjunctive therapy for childhood TB meningitis in a randomised trial.9

There are accumulating data on the role of the anti-TNF-α monoclonal antibodies infliximab and adalimumab and the soluble TNF-α receptor etanercept. They have potent anti-inflammatory properties and are well tolerated, but have been associated with increased risk of TB in those taking them for autoimmune conditions.10 TB developing in patients receiving TNF-α antagonists is more likely to be extrapulmonary or disseminated,11 and early reports suggested that it was more refractory to treatment.12 However, as experience with these agents grew, it became apparent that the poor response could be a PR to the TNF-α antagonist withdrawal. As the immunosuppressive effect of the TNF-α antagonist wanes, the recovering immune system can generate an intense inflammatory reaction against mycobacterial antigens. Two patients with steroid-refractory disease were successfully treated with reintroduction of the offending TNF-α antagonist.4,5

Our report supports an additional role for TNF-α inhibition in severe PRs in immunocompetent individuals. Given that TNF-α antagonists appear to be safe in TB PR, further studies of their role in management are warranted.