Objective: To determine the prevalence of diabetes in inpatients in Melbourne hospitals.

Design: Point prevalence survey of all inpatients in each hospital on a single day between 30 November 2010 and 22 November 2012.

Setting: 11 hospitals in metropolitan Melbourne including community, secondary and tertiary hospitals and one aged care and rehabilitation centre.

Conclusion: The high burden of diabetes in Melbourne hospital inpatients has major implications for patient health and health care expenditure. Optimising care of these high-risk patients has the potential to decrease inpatient morbidity and length of stay as well as preventing or delaying future complications. A formal Australian national audit of inpatient diabetes would determine its true prevalence and consequences, allowing rational planning to deal with shortcomings in its management.

The prevalence of diabetes mellitus in the Australian community is high and increasing rapidly.1-3 Diabetes and its complications cause substantial morbidity and premature mortality, and account for a significant proportion of total health expenditure. For example, patients with diabetes in the United States account for US$123 billion or 26% of inpatient expenditure.4 The prevalence of diabetes in adult inpatients ranges from 5.8% to 26.2% in the US, United Kingdom and Japan,5-7 but there are currently no equivalent Australian data. We therefore undertook a survey to determine the prevalence of diabetes in inpatients in 11 hospitals in metropolitan Melbourne, which included community, secondary and tertiary hospitals and one aged care and rehabilitation centre. We compared demographic parameters between patients with and without diabetes, and collected more detailed information about management and complications from patients with diabetes.

Point prevalence patient surveys were conducted in 11 Melbourne metropolitan hospitals, each on a single day between 30 November 2010 and 22 November 2012. The study was approved by the human research ethics committees of each centre.

Adult inpatients in all wards except intensive care, emergency, obstetrics and psychiatry were surveyed using a scripted interview. Patients were interviewed unless they were absent, too unwell to respond or insufficiently proficient in English. In these cases, medical records were used. Patients were questioned about diabetes status, family history of diabetes, age > 40 years and medications (lipid-lowering, antihypertensive and blood-thinning medication and glucocorticoids).

Patients with diabetes were asked about duration and type of diabetes, treatment, medical management, diabetes and dietetic education, surveillance and prevalence of complications, and smoking.

To validate self-reported diabetes diagnoses, diabetes status was confirmed in medical records of 10% of patients in each hospital. Three patients were misclassified (two without and one with diabetes), indicating an accuracy of 98.7%. Self-reported admission diagnoses matched those on the discharge summary in 90%–95% of a subset of patients.

Continuous data are shown as mean (95% CI). Unpaired t tests or one-way analyses of variance were used to compare groups as appropriate. For categorical data, proportions were analysed using χ2 tests with continuity correction where appropriate, followed by unadjusted z tests to compare individual proportions. Sandringham was excluded from some prevalence ranges for individual hospitals as only eight patients had diabetes. Binomial exact methods were used to calculate 95% confidence intervals for proportions. Pearson correlation between community and hospital prevalence of diabetes was calculated. Analyses were performed using IBM SPSS Statistics version 20.

Admission diagnosis was recorded in 404 patients with diabetes. Of these, only four had a diagnosis directly related to problems with glycaemic control. Cardiovascular disease accounted for 59 admissions. Of 82 patients admitted with infections, 21 had respiratory infections, 17 had skin and/or foot infections and 10 had genitourinary infections. Forty patients were admitted for diabetes-related surgery (peripheral vascular disease surgery, foot surgery, coronary artery bypass grafting, endarterectomy or renal failure-related surgery) and 71 for surgery unrelated to diabetes. Five admissions related to transplantation, and other indications accounted for the remaining 147.

The major finding of this study is that one in four inpatients in Melbourne hospitals had self-reported diabetes. Patients with diabetes were older and heavier than those without, and were more likely to be treated for other cardiovascular risk factors including hypertension and dyslipidaemia. Not surprisingly, most patients had type 2 diabetes, and mean duration was 11.9 years. Almost half were treated with insulin alone or in combination with oral hypoglycaemic agents. More than 80% of patients had at least one microvascular or macrovascular complication. These findings show that inpatients with diabetes are complex cases and have significant comorbid conditions.

The prevalence of diagnosed diabetes in the Victorian community is 5.1% as assessed by National Diabetes Supply Scheme (NDSS) registration,9 although this is an underestimate that excludes unregistered and undiagnosed patients. Rates within the Melbourne metropolitan area range from 2.4% in the Inner Melbourne local government area to 6.7% in Brimbank (centred on Sunshine) and Greater Dandenong. Diabetes prevalence was calculated in the four local government areas nearest each hospital. Assuming these account for most admissions, there was a strong correlation between inpatient and community prevalence of diabetes (r2 = 0.60, P = 0.01) (Box 3). Even assuming that 50% of diabetes in the community is undiagnosed,1 these figures suggest a threefold increased hospitalisation risk with diabetes. Factors accounting for the remaining variance between hospitals may include differences in education, social class, ethnicity, provision of community diabetes support services and inpatient services available in each hospital.

Sunshine and Western Hospitals are located among the most disadvantaged areas in Melbourne, while Alfred, Caulfield and Sandringham Hospitals are in advantaged areas.10 Consistent with the NDSS data, people living in the most disadvantaged areas have diabetes rates that are twice those in the most advantaged.11 Diabetes rates are higher in populations from Asian backgrounds than those from southern European and UK backgrounds,11 and > 50% of the residents served by Western and Sunshine Hospitals were born overseas, mainly in Asia, with up to 60% speaking a language other than English at home.12

There was a significant difference in medical management between hospitals, with more Western and Sunshine Hospital patients being managed by their GPs than those at other hospitals. There are no published data examining the proportion of patients with diabetes who are managed solely by GPs. However, long-term data suggest that increased exposure to specialist care lowers the risk of complications in patients with type 1 diabetes.13 Further, limited local data suggest glycated haemoglobin (HbA1c) is significantly improved in patients managed by advanced skill GPs (those who have taken undertaken postgraduate training in advanced diabetes care) supported by an endocrinologist and diabetes educator.14 However, only 55%–61% of patients in our study recall being seen by a diabetes educator and/or dietitian, suggesting an opportunity to optimise ambulatory diabetes care.

A high proportion of inpatients had complications, which may reflect their older age and long duration of diabetes. Given that diabetes is the leading cause of end-stage kidney disease,15 it is surprising that only 63% of patients recalled having a urine test to assess kidney damage, although this may reflect recall bias. Eighty per cent of inpatients had their eyes tested and 66% had their feet checked. Hospital admission provides an opportunity to optimise glycaemic control thereby reducing microvascular complications.16 Macrovascular complications were also common, being found in 52% of patients. Since the presence of macrovascular disease increases the risk of future major vascular events threefold in patients with diabetes,17 hospital admission is also an opportunity to identify and treat these high-risk patients. For example, the admission may be an opportunity to optimise management of diabetes and other cardiovascular risk factors in these patients.

It is estimated that patients with diabetes account for 26% of inpatient expenditure in the US (US$123 billion in 2012),4 but there are no equivalent Australian data. Australian Institute of Health and Welfare (AIHW) 2010–11 data suggest that diabetes accounted for 2.5% of all hospitalisations in Australia,18 which is considerably lower than our finding. AIHW data include day cases, comprising 58% of admissions,19 which are likely to dilute the prevalence of diabetes. Additionally, there were changes to diabetes coding from 2008–2012 that decreased prevalence by 63%.19 These factors suggest that the AIHW result is a gross underestimate. Interestingly, the coding change has been reversed so that it is now mandated that diabetes always be coded irrespective of admission diagnosis.

The major strength of this study is that it encompasses > 2000 patients across a wide range of metropolitan locations. Although self-reporting of diabetes may be perceived as a weakness, cross-checking of medical records showed 98.7% accuracy. Nevertheless, the study has some limitations. Length of stay, outcomes and biochemical data including HbA1c that may now be used to diagnose diabetes22 were not recorded. Indeed, type 2 diabetes is commonly undiagnosed in the community,1 so that the reported prevalence may be an underestimate. Hospitals were studied over a 2-year period, although each survey was completed in a single day. Importantly, there was no relationship between study date and diabetes prevalence across hospitals. Finally, patient numbers at Sandringham were small, resulting in wide confidence intervals, and the inpatient mix in some hospitals may have biased results.

There are significant gaps in diabetes education and complications surveillance, and hospital admission provides an opportunity to fill these gaps. Although diabetes was not the primary reason for admission in most patients, these findings have significant implications for their short- and long-term outcomes. Appropriate management of diabetes early in the admission may shorten length of stay and decrease readmission rates. Further, optimising management of diabetes and its complications reduces the risk of morbidity due to long-term complications. These findings clearly have a bearing on Australian health expenditure. Ensuring that diabetes and its comorbid conditions are identified and managed appropriately may reduce inpatient costs in the present admission and also decrease future costs related to preventable diabetes-related complications. It is time for a formal Australian national inpatient diabetes audit that ideally captures biochemical data to determine its true prevalence and consequences. Such an audit would allow a comprehensive assessment of this high-risk group and permit rational planning to deal with shortcomings in their management. 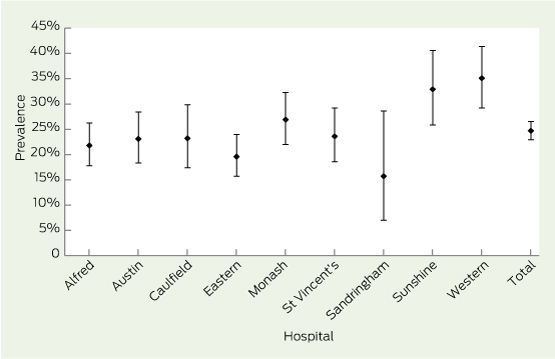 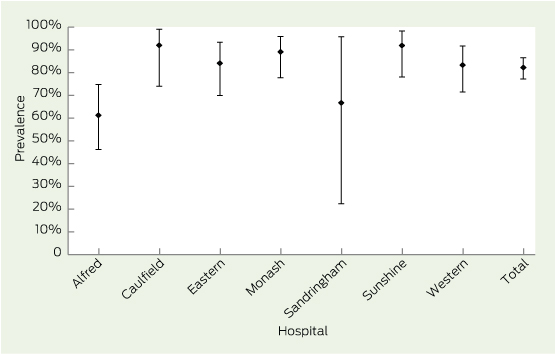 3 Relationship between community and hospital inpatient prevalence of diabetes 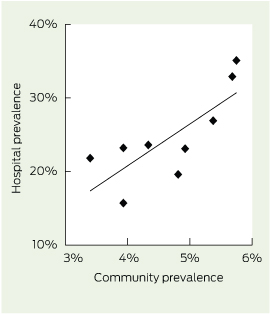 The authors would like to thank Ghazaleh Ahmadi (Eastern Health) and Alan McCubbin (Austin Health) for assistance with collating data. We would also like to thank the numerous dietitians, diabetes nurse educators, hospital medical officers, registrars, endocrinologists and medical students who assisted in data collection.