As plain packaging bites into smoking, The Australian newspaper relentlessly attacks the legislation

This year marks two 50th anniversaries — the first United States Surgeon General's report on smoking and health1 and the establishment of The Australian newspaper.

Fifty years on, there is literally universal acceptance of the massive harms caused by smoking — 178 governments have signed the World Health Organization's Framework Convention on Tobacco Control — but smoking still causes 6 million deaths each year. Given the preventability of the problem, action has been distressingly slow, largely because of the power and ruthless opposition of the global tobacco industry.

Expert reports have noted over the years that there is no magic bullet: a comprehensive approach including legislation and education is needed. In December 2012, legislation came into force in Australia mandating plain packaging of tobacco products, despite ferocious opposition from tobacco interests. This was recommended by the National Preventative Health Taskforce as part of a comprehensive approach, and Health Minister Nicola Roxon was explicit about the main aim: “we're targeting people who have not yet started, and that's the key to this plain packaging announcement  —  to make sure we make it less attractive for people to experiment with tobacco in the first place”.2

Eighteen months later, The Australian ran a front-page story headed “Evidence ‘world's toughest anti-smoking laws' not working: Labor's plain packaging fails as cigarette sales rise”. This was based on a tobacco industry report, still unpublished, claiming a 0.3% increase in tobacco sales volume during 2013. The Australian's campaign against plain packaging continued with (thus far) 14 articles, including three front pages and three editorials attacking plain packaging and its advocates, and even defending the tobacco industry's right to advertise.

The Australian failed to declare a lengthy past association between News Limited and the Philip Morris tobacco company (Rupert Murdoch was on Philip Morris's board from 1989 to 1998), or that some of its journalists and commentators on the issue have associations with the tobacco industry-funded Institute of Public Affairs,3-5 including the author of the original article, who also has a history of attacking the “nanny state”6 and “health fascists”.7

The industry's report remains secret, but Treasury has since published authoritative data showing that “tobacco clearances (including excise and customs duty) fell by 3.4% in 2013 relative to 2012”;8 according to the Australian Bureau of Statistics “total consumption of tobacco and cigarettes in the March quarter 2014 is the lowest ever recorded”;8 and newly released National Drug Strategy Household Survey results show that between 2010 and 2013, daily smoking rates among people aged 14 years and over “declined significantly” from 15.1% to 12.8% (Box); the average number of cigarettes smoked weekly by smokers fell from 111 to 96; and the average age of starting to smoke has increased to 15.9 years.9

Australia is a small market, but plain packaging has massive global implications for an industry desperate to maintain its capacity to promote and glamorise its products. The history of tobacco control shows that when one country implements a measure previously thought difficult, others speedily follow. Governments committed to introducing plain packaging already include New Zealand, the United Kingdom, Ireland and possibly France. The British debate is currently at a crucial phase. Legislation there would be a massive blow for Big Tobacco, not only because it is a much larger market than Australia, but because many countries still look to the UK as an exemplar in areas such as this.

The Australian's misleading reports are unlikely to achieve much in Australia, where there is long standing bipartisan support for plain packaging and comprehensive approaches to tobacco control. Other media have provided accurate and unbiased coverage on this issue, as well as the reality that all the tobacco industry's predictions about disastrous consequences from plain packaging have failed to eventuate.

But The Australian's reports have — as their authors must have expected — attracted attention overseas. UK headlines include “Plain packaging has backfired in Australia — don't bring it to the UK”, “Australia tobacco sales increase despite plain packaging”, “Plain packaging can increase smoking. That's the power of branding”, “Plain cigarette packaging hasn't worked in Australia and it won't work in Britain”. Tobacco companies and their allies have assiduously promoted a similar line — for example, the Institute of Economic Affairs (a tobacco industry-funded group, like Australia's Institute of Public Affairs10) asserts that “with tobacco sales rising after plain packaging was introduced in Australia, the public health case for this policy looks increasingly weak”.11

What can we conclude from this? Plain packaging passes the tobacco “scream test” — the more the industry screams, the more impact we know a measure will have. There is nothing new about deception and distortion from tobacco companies: this has been their practice for six decades. Fifty years on from the landmark Surgeon General's report, it is disappointing that a newspaper such as The Australian provides support for such approaches. Health campaigners should continue to promote measures that will benefit the community, especially children, even if opposed by powerful commercial interests, and to take pride in Australia's capacity to lead the world.

Proportion of Australians aged 14 years and over smoking daily, from the National Drug Strategy Household Survey 1991 to 20139 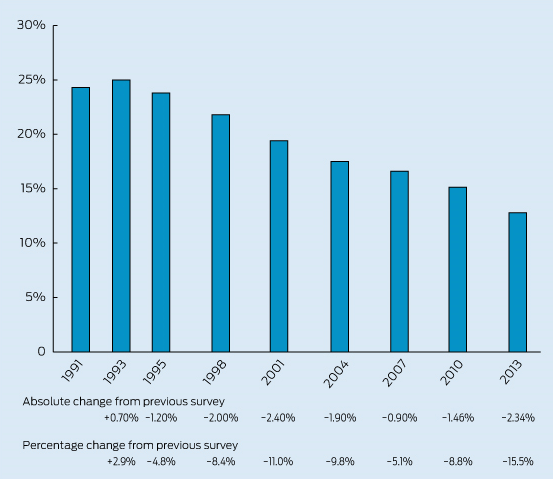