Barking up the wrong tree: injuries due to falls from trees in Solomon Islands

Objective: To investigate tree-related injuries in Solomon Islands by the types of trees involved, who is affected and the types of injuries caused.

Design and setting: Descriptive case series of all cases of injuries related to trees presenting to the National Referral Hospital in Honiara from 1994 to 2011. Data were collected by the attending clinician using a Trauma Epidemiology form, which provides information on age, sex, cause of injury and type of fracture.

Results: Of the 7651 injuries in the database, 1107 (14%) were caused by falls from trees. Falls from coconut trees led to the highest number of injuries, followed by falls from mango, guava, apple and nut trees. Overall, 85% of injuries occurred in individuals aged < 20 years. For injuries involving guava trees, 77% of patients were aged < 10 years, compared with 46% for the five most commonly involved tree types. Overall, 71% of injuries occurred among males. Of all injuries, 92% were fractures, 3% were dislocations and 5% were non-fracture, non-dislocation injuries. The arm (including wrist, elbow and hand) was the most common location of injury across all tree types. Distal radius fractures in the forearm were particularly common, as were ulna fractures.

Conclusion: While mangos and guavas are undeniably delicious, the quest for their flesh can be hazardous. Children will always climb trees, but the search for food among children in lower-income settings may lead to higher rates of injury.

Tree crops form an important component of the export market of lower-income countries such as Solomon Islands.1-4 Specifically, up to 70% of the country's population is directly dependent on the coconut industry for income or nutrition.5 In Solomon Islands, important tree crops that provide staple foods include the breadfruit tree, guava tree and the seasonal ngali nut tree.1,6 The proximity of the population to trees, coupled with the country's heavy reliance on tree-based crops, ensures that injuries from interactions with trees form a considerable health care burden within the country.

Indeed, what little prior research exists has indicated that hospital presentations due to tree-related injuries are common within countries heavily reliant on tree-based crops. Barss and colleagues found that in Papua New Guinea, falls from trees accounted for up to 27% of admissions to trauma wards.7 It is apparent that tree injuries place a significant burden on the health care sector, particularly with respect to injuries sustained by younger people.8 This study uses 18 years of data from the National Referral Hospital (NRH) in Honiara, Solomon Islands, to investigate tree-related injuries within the country, by identifying the types of trees involved in injuries, the groups affected by these injuries, and the prominent types of injuries incurred by falls from trees.

Our study is a descriptive case series analysis of all injuries related to trees presenting to the NRH, the nation's only tertiary facility, over 18 years. Data were routinely collected from a database of all patients who were treated by the NRH general surgery and orthopaedic departments between 1994 and 2011.

These data arise from a larger dataset on all injuries collected by the NRH over this period. At the NRH, these data are collected by the attending clinician using a Trauma Epidemiology form. Anonymised patient data are then entered into a Microsoft Access database by clinic staff.

There were 7651 cases of injury in the database. These cases were classified into locally defined cause codes for the mechanism of injury. For the purposes of our study, we analysed the injuries that had been classified as “tree”. We then reviewed the notes available in the dataset that specified the type of tree and provided anonymised demographic information about the patient as well as information about the injury itself.

Of the 7651 injuries in the database, 1107 (14%) were caused by falls from trees. Analysis by type of tree found that falls from coconut trees accounted for the highest number of injuries, followed by falls from mango and guava trees (Box 1). Along with apple and nut (including ngali) trees, these five types of trees were involved in over half of all tree-related injuries that led to NRH visits.

Of all injuries, 92% were fractures, 3% were dislocations and 5% were non-fracture injuries including contusions and concussions. The arm (including wrist, elbow and hand) was the most common location of injury across all major tree types (Box 4). The highest proportions of injuries to the torso and to the head and neck resulted from falls from coconut trees. About one in six falls led to injuries in multiple locations of the body — the most common type of multiple fracture involved both the radius and ulna. Distal radius fractures in the forearm were particularly common, and supracondylar fractures were common among children.

Mangos, guavas and coconuts are undeniably delicious but the quest for their fruit can be hazardous.

Given the centrality of coconuts to the Solomon Islands economy, it is perhaps not surprising that falls from coconut trees resulted in the greatest number of injuries requiring a hospital visit. Fruit trees (mango, guava and apple) were the next most common source of injuries. In addition, these injuries were more common among children, suggesting that children might be climbing trees for food as well as for fun.

Other comparable studies also found that young people are disproportionately affected by these injuries.7,9-12 Data from the Pacific Islands on productive tree crops further support the notion that young people are typically those who fall from trees.7,11,12 Further, boys tend to sustain more injuries from falls than girls in both high-income and lower-income countries.7,11,13,14

There are a number of limitations to this study. The type of tree was recorded by the clinician on duty based on the recall of the injured patient or friends and family leading to possible bias or inaccuracies. Further, our analysis only includes those injuries that led to a visit to the NRH. Many other falls would undoubtedly not have led to visits to the hospital, because of distance, severity or other factors. Nevertheless, hospital-based injury databases can provide critical information to inform policy and population-based data collection.15

Solomon Islanders use trees for play, food and livelihoods. More supervision of children and awareness of the dangers of falls from trees might reduce the burden of injury.

1 Number of injuries resulting from falls from trees, by tree type (n = 1107)

2 Number of injuries resulting from falls from trees, by age and most commonly involved tree type*

3 Injuries resulting from falls from trees, by sex and most commonly involved tree type 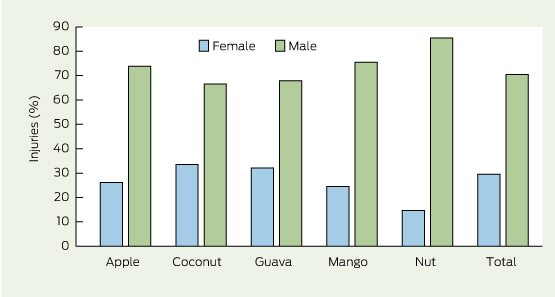 4 Body location of injuries, by most commonly involved tree type