The global response to diabetes: action or apathy?

Hands up everyone who thinks the United Nations is weak and ineffectual and the World Health Organization is risk-averse and unresponsive?

While both organisations were slow to arrive at their current position on diabetes and its partners in crime — cardiovascular disease, cancer and chronic respiratory diseases — recent developments indicate that those with raised hands may need to rethink. Certainly, many programs following the 1989 World Health Assembly resolution on the prevention and control of diabetes1 had little political buy-in. Nonetheless, the resolution left a legacy of WHO and International Diabetes Federation (IDF) cooperation on regional declarations that encouraged political commitment and national action on diabetes and seeded a new approach to the prevention and control of non-communicable diseases (NCDs). This and subsequent civil society action, including the 2006 UN resolution designating 14 November as World Diabetes Day,2 were instrumental in shaking political apathy and alerting the world to the threat of NCDs.

The global policy response to diabetes is inextricably linked with cancer, cardiovascular disease and chronic respiratory diseases and, in 2011, the UN General Assembly held a high-level meeting on NCDs. This resulted in all 193 member states signing a Political Declaration that set out policy directions and actions to mitigate the impact of NCDs and reduce their upward trend.3 At first glance, the Political Declaration appeared to be too vague and “high level” to effect tangible change. On closer examination, it is surprisingly detailed and action-oriented, requiring member states to report progress on national NCD action plans to the 2014 General Assembly. It also recognised the development challenges posed by NCDs and cited the detrimental role of unhealthy food and physical inactivity.

The cynics claimed the NCD high-level meeting and Political Declaration were just another empty gesture, but within 6 months the World Health Assembly adopted a global target of 25% reduction in premature mortality from NCDs by 2025. This was followed in 2013 by a comprehensive global monitoring framework for NCDs of nine targets and 25 indicators — including a target of 0% increase in obesity and diabetes.4 Proclaiming “what gets measured gets done”, WHO Director-General Dr Margaret Chan demonstrated the WHO's determination to prevent and control NCDs by launching a new global action plan5 and a global coordination mechanism to oversee its implementation.

Subsequently, in July 2014, UN members returned to New York for a high-level review of progress on the 2011 Political Declaration, to maintain the momentum on NCDs at the highest political level. The review signalled a shift from global dialogue to national implementation and adopted a new outcome document detailing bold, specific, time-bound and measurable national commitments (eg, setting NCD targets and multisectoral plans and mechanisms).6 The outcome document reaffirms that NCDs are a major health and development challenge and calls for their inclusion in the post-2015 development agenda. It includes specific commitments to implement cost-effective interventions for prevention and control, improve monitoring and surveillance, strengthen international cooperation, scale up resources and convene a UN review of NCDs in 2018.

Why diabetes? Why now?

The UN, WHO and global public health community were slow to recognise the true magnitude of NCDs. Focused on eradicating infectious diseases and reducing perinatal mortality, they failed to appreciate both the size of the NCD problem and its implications.

Taking diabetes alone, globally in 2013, it:

Mortality from diabetes outstrips the combined mortality from malaria (around 600 000 annual deaths), tuberculosis (1.5 million) and AIDS-related causes (1.6 million).8-10 In contrast, combining cardiovascular disease, cancer and chronic respiratory diseases with diabetes brings the total annual global NCD death toll to 35 million — over 60% of the world's mortality. However, it was not this, but the macroeconomic impact, that prompted global action on NCDs. It was estimated that for every 10% rise in NCDs, a country could lose 0.5% of its gross domestic product,11 and NCDs were ranked among the top global risks to business due to the trillions of dollars incurred annually through lost productivity.12

Others voiced alarm at the societal implications of NCDs, citing intergenerational poverty, changing patterns of dependency and lost educational opportunity — thus framing NCDs as an impediment to human development and achievement of the Millennium Development Goals (MDGs). A vital influence in this was the game-changing advocacy of civil society. The IDF-led 2006 UN resolution on diabetes2 paved the way, as did the joined-up, whole-of-society approach encapsulated in the Oxford Health Alliance's Sydney Resolution.13 By 2010, when the IDF launched its global A call to action on diabetes14 in China (then home to 92 million people with diabetes and another 148 million with prediabetes15), it had its advocacy word perfect. The IDF's graphic illustration of the interaction of diabetes with other NCDs, infectious diseases, poverty, lost productivity, gender inequality and even climate change (Box) undoubtedly exerted strong influence on the UN high-level meeting process and outcomes. So, too, did the formation of the NCD Alliance (http://www.ncdalliance.org) in 2009. This coalition of the four major global NCD federations — the IDF, the World Heart Federation, the Union for International Cancer Control and the International Union Against Tuberculosis and Lung Disease — was timely, well organised and powerful. Running advocacy side events at UN, World Health Assembly and European Union meetings and backed by its membership of 2000 civil society associations in 170 countries, the NCD Alliance sent strong signals to the UN, WHO and national governments that it was time to stem the rising tide of NCDs.

The absence of NCDs in the MDGs had long been an obstacle to mobilising political leadership and resources. The official UN process to scope the post-2015 development agenda will determine the contours of global health and development architecture, which national policies and programs are implemented, and the extent to which current gains are sustained and extended. Since its inception, the NCD Alliance has coordinated a global campaign to integrate NCDs into the successor goals to the MDGs. Consequently, health and NCDs have become a consistent priority in the post-2015 framework thus far. For example, the outcomes document from the 2012 Rio+20 UN Conference on Sustainable Development acknowledges NCDs as one of the greatest development challenges of the 21st century and an area for urgent investment and action.16 Further, the UN Secretary-General's MDG progress report called for reducing the burden of NCDs as part of the vision and transformative actions of the future development agenda.17 Consistent with the WHO's global monitoring framework for NCDs, the current draft of the post-2015 agenda includes a standalone target:

By 2030, reduce by one-third premature mortality from [NCDs] through prevention and treatment, and promote mental health and wellbeing.18

Where does Australia sit in all of this?

Australia enjoys an excellent reputation in global and international health policy — receiving special thanks from the WHO for its assistance in negotiating the NCD global monitoring framework with fellow member states and acclaim for its tobacco plain packaging. Growing over time since its ratification of the 1989 World Health Assembly resolution urging countries to develop national diabetes action plans,1 Australia's standing was evidenced in 2013 by the election of Jane Halton, then Secretary of the Australian Department of Health and Ageing, as Chair of the World Health Assembly Executive Board.

Australia's history of political will for diabetes has long been underpinned by its bipartisan Parliamentary Diabetes Support Group, which has provided an exemplary model for the establishment of similar groups in other countries. Australian diabetes professionals have also been active, having contributed a recent IDF president, an ongoing supply of IDF vice-presidents, and leadership of global and regional diabetes action plans and declarations.

Diabetes was added to Australia's national health priority areas in 1997. A comprehensive National Diabetes Strategy and Implementation Plan was launched in 199819 and widely implemented, with considerable success in improving processes of diabetes care. However, population health outcomes data were not forthcoming and, in recent years, some of the original commitment and momentum has been lost. More recently, responding to calls by Diabetes Australia, in December 2013 the incoming Coalition government announced a new National Diabetes Strategy Advisory Group to:

provide expert policy advice to Government that prioritises the national response to diabetes within the broader context of prevention and primary health care, supporting patients with complex health conditions and the growing burden of chronic disease on our health system.20

The advisory group is due to report to the Minister for Health in April 2015 and will almost certainly adopt the targets and indicators detailed in the WHO global monitoring framework.4

Also in December 2013, a pragmatic political response to the relentless march of diabetes began to unfold in Melbourne when the IDF World Diabetes Congress hosted the inaugural global Parliamentary Champions for Diabetes Forum. This was attended by senior parliamentarians from countries across four continents and the Pacific and Caribbean Islands, who signed the Melbourne Declaration on Diabetes, thereby establishing a new global advocacy program and network. Diabetes events have since been held in parliaments around the world, and the network has more than doubled to represent some 40 countries — an auspicious omen for sustaining an action-oriented, political response to diabetes, and its fellow NCDs, at the highest level worldwide. However, the most arduous part of the task — widespread implementation of the new global policies — still lies ahead, and success can only be claimed when measurable population-based improvements in diabetes and related NCD outcomes are achieved.

Diabetes and its critical connections* 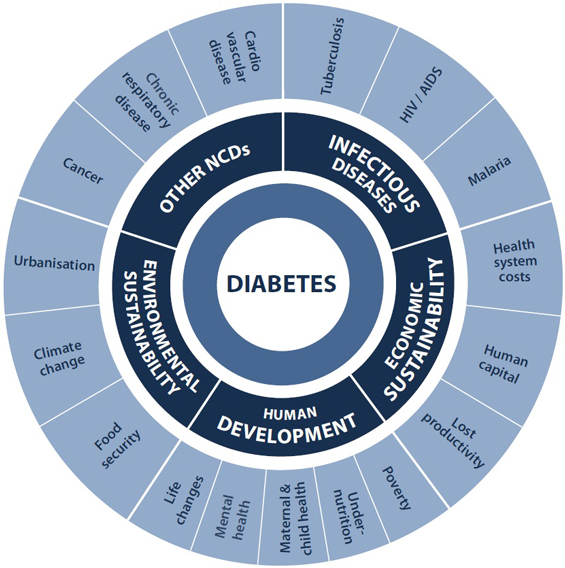 NCD = non-communicable disease. * Reproduced from A call to action on diabetes,14 with permission of the International Diabetes Federation.

Ruth Colagiuri is an immediate past vice-president of the IDF and led the development and writing of A call to action on diabetes (2010) and the Global Diabetes Plan 2011–2021 (2011).