Objectives: To report the quarterly incidence of hospital-identified Clostridium difficile infection (HI-CDI) in Australia, and to estimate the burden ascribed to hospital-associated (HA) and community-associated (CA) infections.

Design, setting and patients: Prospective surveillance of all cases of CDI diagnosed in hospital patients from 1 January 2011 to 31 December 2012 in 450 public hospitals in all Australian states and the Australian Capital Territory. All patients admitted to inpatient wards or units in acute public hospitals, including psychiatry, rehabilitation and aged care, were included, as well as those attending emergency departments and outpatient clinics.

Conclusions: A significant increase in both HA-CDI and CA-CDI identified through hospital surveillance occurred in Australia during 2011–2012. Studies are required to further characterise the epidemiology of CDI in Australia.

Global rates of hospital-associated Clostridium difficile infection (HA-CDI) have increased dramatically over the past 10 years. The emergence of fluoroquinolone-resistant C. difficile polymerase chain reaction (PCR) ribotype (RT) 027 in North America in 2003 and in Europe in 2005 has been associated with increased morbidity and mortality.1,2 The appearance of RT027 in Australia was delayed, with the first reported case occurring in Western Australia in 2009 in a patient who apparently acquired the infection overseas.3 The first case of locally acquired infection did not occur until 2010 in Melbourne, Victoria.4 The reasons for this delay are unclear but could be due to Australia’s geography, which may impede the introduction of new strains into the country, and slow their spread due to the distances between major cities.5 Also, Australia’s conservative policies on fluoroquinolone use in humans and animals6 may have offered some protection.

Rates of community-associated CDI (CA-CDI) are also increasing worldwide.7,8 Patients with CA-CDI tend to be younger, less likely to have been exposed to antibiotics (although antibiotic exposure is still a major risk factor) and have fewer comorbidities than patients with HA-CDI.7

Each jurisdiction provided surveillance data, using the national definition of CDI and method for calculation of rates, from 1 January 2011 to 31 December 2012.12 Ethics approval was not required for the study because we collated and analysed aggregate-level data (not individual records).

The primary outcome was hospital-identified CDI (HI-CDI), defined as CDI diagnosed in a patient attending any area of an acute public hospital (ie, patients admitted to inpatient wards or units, including psychiatry, rehabilitation and aged care, and those attending emergency and outpatient departments). This reflects the burden of CDI on a hospital and includes both HA-CDI and CA-CDI, as well as infections of indeterminate or unknown origin.

A CDI case was defined as a patient having diarrhoea (an unformed stool taking the shape of the container), and the stool sample yielded a positive result in a laboratory assay for C. difficile toxin A and/or B, or a toxin-producing strain of C. difficile was detected in the stool sample by culture or PCR. Cases were only included once in an 8-week period, and patients < 2 years old at the date of collection were excluded.

As some jurisdictions undertook enhanced surveillance, HA-CDI and CA-CDI were included as secondary outcomes, with each CDI case classified according to the place of probable exposure, as follows:13

Data on HI-CDI were provided from 450 public hospitals in New South Wales, Queensland, South Australia, Tasmania, Victoria, Western Australia and the Australian Capital Territory, covering 92% of all patient-days in Australian acute public hospitals.14 No data were received from the Northern Territory. All participating jurisdictions used the national definition of HI-CDI, but there were variations in the denominator used to calculate rates. Qld, SA and Tas used patient-days (number of days of patients’ hospitalisation during a specified period), while the remainder used occupied bed-days (total daily numbers of occupied beds during a specified period). The yearly variance between these two measures is estimated to be < 1%, and we use the term patient-days (PD) in this study.15 In addition, all contributors except WA excluded patients < 2 years old from denominator data.

There were some differences in the definition of HA-CDI used. Tas, Vic and WA classified HA-CDI according to the national definition, whereas the ACT and SA defined it as cases where specimen collection occurred > 48 h after admission.

We used Stata version 12.1 (StataCorp) for statistical analysis. The incidence of CDI per 10 000 PD was calculated as: CDI cases/number of PD × 10 000; 95% confidence intervals were calculated for Poisson distributed counts. Overall and quarterly incidence rates were calculated for HI-CDI, with stratification according to source of exposure (HA-CDI, non-HA-CDI and CA-CDI). Poisson regression models were used to estimate percentage changes in incidence rates and 95% CIs; temporal trends and seasonal effects were tested using a Poisson regression model including a piecewise linear spline with four change points identified from the temporal pattern of HI-CDI across all jurisdictions. Overdispersion was assessed by examining the deviance statistic of the Poisson model and also the log likelihood test of a negative binomial model compared with a Poisson model. Serial autocorrelation was assessed by inspection of the model residuals over time. There was no evidence of overdispersion or autocorrelation, and Poisson models were selected.

Box 4 plots the observed and predicted incidence for all HI-CDI (A), HA-CDI (B) and CA-CDI (C), with the corresponding percentage changes in incidence rates shown in Box 5. The data show that the incidence increased throughout 2011, particularly in the second half of the year, then declined in early 2012 before rising again in late 2012. The trends were similar for HA-CDI and CA-CDI, except that HA-CDI increased steadily throughout 2011, whereas the increase in CA-CDI occurred towards the end of the year. The late-year spring peak was repeated in 2012, albeit at a smaller magnitude than in 2011 for CA-CDI cases.

A standardised approach to the case definitions used for surveillance of HI-CDI was implemented by most Australian states and territories during 2010. Although we found differences in incidence rates between Australian jurisdictions, our analyses confirm that rates of HI-CDI increased Australia-wide during 2011 and remained high during 2012.

The incidence of CDI has increased in many industrialised countries in the past two decades.5 Since 2003, the escalation in rates of CDI in North America correlated with the emergence of a new C. difficile strain (RT027) that had higher than usual production of toxins A and B, possessed a third toxin (binary toxin) and was fluoroquinolone-resistant. Rates of CA-CDI are also increasing worldwide, estimated to comprise more than a third of all CDI cases in North America7 and Europe.8

Our findings are consistent with the overseas data, in that CA-CDI cases comprised 26% of all HI-CDI cases in Australia, and rates have substantially increased since 2011. Expansion of surveillance activities to incorporate C. difficile strain typing would give greater insight into the epidemiology of CDI in Australia, particularly in light of recent data from the United Kingdom showing that there is less inhospital transmission of CDI than previously thought.16

There are several potential explanations for the regional and temporal patterns we observed. Ascertainment bias due to increased case finding (eg, through greater awareness, improved surveillance and increased laboratory testing) cannot be ruled out, as the ACSQHC recommendations for hospital surveillance programs were implemented by the beginning of 2011, and the patterns may reflect differing adoption strategies across regions and over time. Changes in laboratory methods may also be a factor. Although many laboratories in Australia have now moved away from using insensitive enzyme immunoassays, this has occurred at different times, and methods still differ between areas.17 For example, WA used PCR for the entire study period; Qld, Tas and Vic used direct cytotoxin or toxigenic culture; and SA switched to PCR during 2012. Recent data from the United States demonstrate at least a 30% increase in the incidence of CDI attributable to adoption of more sensitive nucleic acid amplification tests.18 Implementation of more sensitive tests in Australia may have contributed to the observed overall increasing temporal trend, but it is less likely to explain the observed peaks at the end of each year (southern hemisphere spring–summer). Seasonality in HI-CDI has previously been described in Canada19 and Germany,20 and such peaks could be due to seasonal changes in risk factors for CDI, such as antibiotic prescription for respiratory tract infections during winter.19 Further investigation of the observed trends is necessary, and a longer period of data collection is required to substantiate a true seasonal effect in Australia.

The major strength of our study is the use of a standardised definition of HI-CDI across Australia, which, along with the establishment of surveillance systems for HI-CDI in each state and territory according to ACSQHC guidelines, enabled a study of national CDI rates. National CDI surveillance is predicated on a laboratory-based system and includes validation processes. Nevertheless, several limitations exist.

First, although a standardised definition of HI-CDI was used by all surveillance programs included in the analysis, and good coverage of hospital admissions was achieved for CDI surveillance (92% of all patient-days in Australian acute public hospitals), not all participating hospitals undertook enhanced surveillance for different CDI classifications, restricting the analyses that could be performed. Rates of CA-CDI were based on subgroup analyses of data from three states and may not be representative of Australia as a whole. However, the overall HI-CDI rate and the proportion of HA-CDI from this subgroup were similar to those from the fuller dataset and there is therefore no reason to suspect that CA-CDI rates are not nationally representative. There was also some variation in the definition of HA-CDI, although surveillance programs across Australia are increasingly adopting the recommended definition.

A second important limitation lies with the differences in the types of hospitals included. However, this limitation is reduced by restricting the analyses to public hospitals and using number of patient-days to calculate rates. Nevertheless, as the rates reported here do not take into account the different casemix of hospitals in each state or territory, comparison of rates between states and territories should be interpreted with caution. The study analysed aggregate rather than individual-level data, therefore important confounders (eg, comorbidity) that are not reported to the surveillance programs could also not be taken into account. Further, there was variation in the denominator data, with some jurisdictions using patient-days and others using occupied bed-days. However, the yearly variance between these was estimated to be less than 1%, although the monthly variance can be greater, particularly in small hospitals.15 In addition, all contributors except WA excluded patients aged < 2 years from the denominator. However, the 0–4-years age group accounts for less than 4% of hospital separations of all types in Australia, and inclusion of < 2-year-olds in the denominator is unlikely to substantially affect the results or alter the conclusions of this study.14

2 Incidence of hospital-identified Clostridium difficile infection in Australia over time, by state or territory 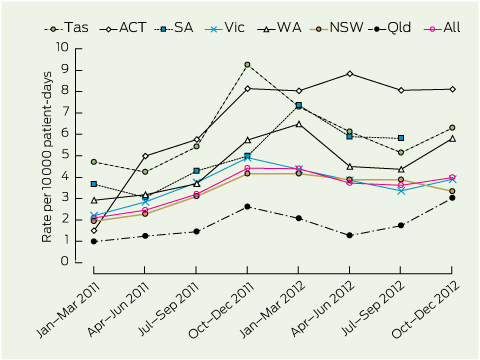 We thank Christine Cope from the South Australian Infection Control Service, SA Health, for assistance with the provision of data.