Objective: To evaluate the impact and effectiveness of the 23-valent polysaccharide pneumococcal vaccine (23vPPV) in ≥ 65-year-old Australians in the context of concurrent 7-valent pneumococcal conjugate vaccine (7vPCV) use in infants.

Conclusions: The greater reduction in IPD among ≥ 65-year-olds compared with 50–64-year-olds did not reach statistical significance. However, vaccine effectiveness was significant. Greater reductions in IPD in ≥ 65-year-olds would be expected from the indirect effects of using 13-valent pneumococcal conjugate vaccine in infants (introduced for Australian infants in 2011) and an increase in 23vPPV coverage.

Invasive pneumococcal disease (IPD) is a major cause of morbidity in very young children and older adults.1 The 23-valent polysaccharide pneumococcal vaccine (23vPPV) has been available in Australia since 1986, and use of it has increased progressively since then. It was recommended and subsidised under the Pharmaceutical Benefits Scheme for Australians aged ≥ 65 years in 1997, provided free of charge for this group in Victoria from 1998, and included in the nationally funded National Immunisation Program from 2005.2 The vaccine’s effectiveness against IPD in immunocompetent older people has been estimated as about 70%,3 but it is generally regarded as not effective in preventing carriage of pneumococcal serotypes against which it is targeted.1,3

Australia is the only country to have introduced nationally funded programs for the 7-valent pneumococcal conjugate vaccine (7vPCV) for infants and the 23vPPV for older people in the same year (2005).4 Unlike the 23vPPV, the 7vPCV has been shown to prevent carriage of vaccine serotypes,1 resulting in herd immunity impacts. Reductions in IPD due to 7vPCV serotypes, in vaccinated and unvaccinated age groups, have been observed in many countries. Increases in non-7vPCV serotypes (referred to as serotype replacement) have also been observed in vaccinated and unvaccinated age groups, with the net impact on total IPD incidence varying from country to country.5

In Victoria, a 36% decrease in IPD incidence occurred in people over 65 years of age following the introduction of funded 23vPPV in that state in 1998;6 this was before widespread use of the 7vPCV in children. 7vPCV coverage among infants rose rapidly to 90% in Australia in the first year of the nationally funded program.7 As all 7vPCV serotypes are also present in 23vPPV, any herd immunity effect from 7vPCV would complicate interpretation of the impact of 23vPPV in older people. Studies from two regions on IPD incidence in Australian adults in the post-7vPCV era have provided conflicting evidence on the changes in total IPD incidence in older people.8,9

In July 2011, the 13-valent pneumococcal conjugate vaccine (13vPCV) was introduced for all Australian infants, replacing the 7vPCV and (in the Northern Territory) the 10-valent pneumococcal conjugate vaccine.10 Unlike the 7vPCV, the 13vPCV has been licensed for use in adults aged ≥ 50 years in the United States and Australia, but has not yet been included in the National Immunisation Program.

To inform policy decisions relating to the use of the 13vPCV and the 23vPPV in Australian adults, we aimed to answer three questions:

Notifications of IPD were obtained from the National Notifiable Diseases Surveillance System (NNDSS), which notionally captures all laboratory-confirmed cases of IPD. To distinguish the impact of the 7vPCV and the 23vPPV, notifications were aggregated by serotype category: serotypes contained in both vaccines (7vPCV serotype), those contained in the 23vPPV but not in the 7vPCV (23vPPV–non-7vPCV serotype) and those not contained in either vaccine (non-23vPPV serotype). Notifications for people in Victoria and people recorded as Indigenous were excluded, as funded programs for these populations commenced earlier than the national program (in 1998 and 1999, respectively). The proportion of notifications for which specimens were serotyped increased from 70% in 2002–2003 to 87% in 2006. To ensure that time trends in serotype categories were not distorted by this change, the serotype distribution among untyped cases was inferred from the serotype distribution among typed cases, by jurisdiction and by year.

This study was exempt from the requirement for ethics approval as it was conducted as a quality assurance exercise pertaining to the National Immunisation Program, under the auspices of the Australian Technical Advisory Group on Immunisation. De-identified data were provided for this purpose by the Communicable Diseases Network Australia.

Trends in IPD and vaccination coverage

Population rates of IPD by serotype category in people aged ≥ 65 years by year from 1 January 2002 to 31 December 2011 were plotted with 95% confidence intervals, which were calculated using the Poisson distribution of notification numbers. The estimated residential populations, minus Indigenous population estimates from the 2006 Australian census, were used as denominators for calculations of rates in the non-Indigenous population.11

Vaccination coverage estimates for people aged ≥ 65 years, by jurisdiction, were available from adult vaccination surveys conducted by the Australian Institute of Health and Welfare in 2004, 2006 and 2009.12-14 These were based on respondents’ report in telephone interviews regarding receipt of pneumococcal or pneumonia vaccine within the previous 5 years, without reference to written vaccination records.

Estimates of vaccine effectiveness (VE) in the ≥ 65-year age group were calculated using the screening method, a form of case–cohort study. It compares the likelihood of prior vaccination in 23vPPV serotype IPD cases with that for the total population. It uses the formula VE=1−[CV÷(1−CV)]×[(1−PV)÷PV], where CV is the proportion of cases that occurred in vaccinated people, and PV is the proportion of the population that had been vaccinated.15

The proportion of the population vaccinated was obtained from the adult vaccination surveys conducted in 2004, 2006 and 2009.12-14 Separate estimates for the 65–74-year and ≥ 75-year age groups by jurisdiction were available from the 2004 and 2006 surveys.

The proportion of 23vPPV-type IPD cases that were recorded as being in “fully vaccinated” people (ie, those vaccinated within 5 years, according to national recommendations at the time) who were aged ≥ 65 years was derived from the NNDSS for each year that population coverage data were available (2004, 2006 and 2009). For these VE calculations, cases recorded on the NNDSS as having occurred in people in Victoria or Indigenous people were not excluded, as their different dates of 23vPPV funding do not influence VE estimates. In addition, cases that occurred in Indigenous people were included in population coverage data, so the method required their inclusion in the study population.

A logistic regression model was fitted using the GENMOD procedure in SAS 9.1 (SAS Institute) as described previously.16 Data were stratified by year, age group and, for 2004 and 2006, by jurisdiction. A sensitivity analysis of the VE estimates was conducted, recalculating VE using a deviance of ± 10% of the total population in coverage estimates. Statistical analysis was carried out in SAS 9.1.3. Statistical significance was established by non-overlapping 95% confidence intervals, of rates and rate ratios.

From 2002 to 2011, there were 3978 IPD notifications for Australians aged ≥ 65 years who were not in Victoria and were not Indigenous.

Annual IPD notification rates in people aged ≥ 65 years by serotype category are shown in Box 1. There was a substantial and statistically significant decrease in 7vPCV serotype IPD during the post-7vPCV era (2005–2011), as well as significant increases in 23vPPV–non-7vPCV and non-23vPPV serotypes, based on non-overlapping confidence intervals of annual rates.

The range of self-reported vaccination coverage (percentage vaccinated in the previous 5 years) estimates for those aged ≥ 65 years are also shown in Box 1, for all jurisdictions except Victoria. Coverage ranged from 41% to 53% in individual jurisdictions in 2004, increased to 51%–64% in 2006 and decreased to 48%–56% in 2009.

Pre-7vPCV (2002–2004) to post-7vPCV (2010–2011) changes in IPD rates in the ≥ 65-year age group and the 50–64-year age group are shown in Box 2. In both age groups there were substantial, statistically significant decreases for 7vPCV serotypes and increases for 23vPPV-non-7vPCV and non-23vPPV serotypes, based on IRRs not overlapping 1.0. The magnitude of these changes did not differ significantly between the two age groups. For all serotypes, the IRR point estimate was lower in the ≥ 65-year age group, but confidence intervals for the two age groups overlapped.

Changes in IPD rates over time by serotype category presented here provide evidence of a substantial herd immunity impact in older people due to 7vPCV use in infants. However, an impact on IPD rates directly resulting from 23vPPV use in older people, by comparing changes in vaccinated and unvaccinated age groups, was not clearly shown. The VE estimate for 23vPPV against 23vPPV-type IPD was 61.1%. An overall decrease of 35% was observed in total IPD rates in ≥ 65-year-olds 6–7 years after the commencement of the nationally funded programs for 7vPCV and 23vPPV (25.2 notifications/100 000 population/year in 2002–2004 v 16.4 in 2010–2011).

Herd immunity impacts in adults from use of the 7vPCV in children have been shown in many countries. Herd immunity impacts on total IPD rates are heavily dependent on the pre-vaccination serotype distribution in adults and the length of time since 7vPCV introduction, as serotype replacement increases over time.5 Australian non-Indigenous people had one of the highest proportions of 7vPCV-type IPD out of total IPD in the world, similar to that in the US, and these are the only two countries with net decreases in IPD reported for older people following 7vPCV introduction.17

Trends in IPD rates by year in Australia in our study did not show clear evidence of a reduction of disease incidence due to use of 23vPPV in people aged ≥ 65 years. However interpretation of this finding is complicated by two factors: an overall modest level of 23vPPV coverage and a relatively small increase in coverage after national funding began in 2005; and the apparent indirect effects of introducing the 7vPCV for infants at the same time. The comparison of rates in vaccinated and unvaccinated age groups, both subject to herd immunity impacts from infant vaccination, allows the possibility of some impact from the 23vPPV. The absence of impacts on population IPD rates following publicly funded 23vPPV for ≥ 65-year-olds has also been reported in the US18 and United Kingdom.19 Gradual increases in coverage also occurred in those settings, and formal VE assessments in adults have consistently shown significant VE.20-22

During the period of our study, a single revaccination was recommended for people first vaccinated at ≥ 65 years of age. As of December 2011, this is no longer recommended.10 The latest national estimate of the proportion of people aged ≥ 65 years who have ever received 23vPPV is a modest 59%.13 Given the evidence of the vaccine’s effectiveness, higher coverage would be expected to increase the impact of the vaccine in reducing IPD incidence.

Data are yet to emerge on the herd immunity impact from 13vPCV use in Australian children. However, if similar effects are seen from the additional six serotypes as from the 7vPCV, there would be a further reduction in IPD in older people and, therefore, less potential benefit from the 23vPPV.

In conclusion, our data show moderate effectiveness of the 23vPPV against IPD in older Australians, consistent with that shown in comparable populations elsewhere. In combination with herd immunity impacts from 7vPCV in children, this resulted in a 35% decrease in IPD in those aged ≥ 65 years. Further benefits could be expected if an increase in 23vPPV coverage in older people could be achieved. 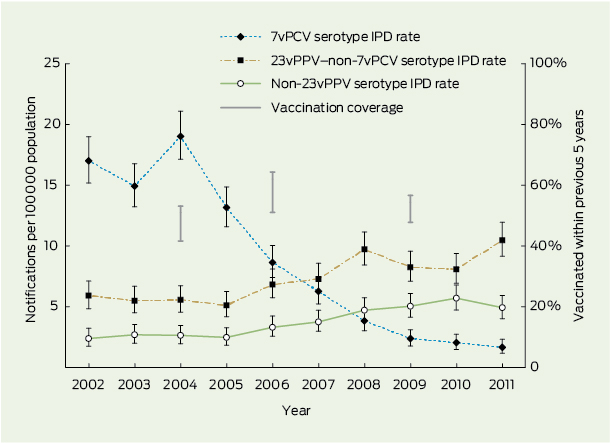 The National Centre for Immunisation Research and Surveillance of Vaccine Preventable Diseases was supported to conduct this study, and the manuscript approved, by the Australian Government Department of Health and Ageing. However, the views expressed are not necessarily those of the Department.