Prostate cancer is one of the commonest solid organ cancers diagnosed and cause of cancer mortality in Australian men.1 In 2009, more than 19 400 new cases were diagnosed in . Increased public awareness and prostate-specific antigen (PSA) testing have increased the rate of detection of prostate cancer, while continued advances in cancer management have led to improved clinical outcomes in men diagnosed with this disease. While active surveillance is a valid management option in men with low-risk cancer, many cancer patients are anxious about the prospect of cancer and often face the dilemma of choosing between a potential cure and possible loss of quality of life.2

The term “cancer survivor” has now replaced the term “cancer victim” and applies from the time of diagnosis throughout the rest of the patient's lifetime. This term reflects the fact that a patient is living with cancer, and prostate cancer survivors not only have to live with the constant fear of possible future problems and the need for long-term surveillance, but are also faced with significant physical, cognitive, sexual and socioeconomic problems after their treatment.2 Further, many men face the distress of sexual difficulties such as loss of erectile function and, in some cases, pain related to sexual activity. Published literature shows that over 70% of men felt their quality of life was adversely affected after diagnosis and treatment of prostate cancer, and that male sexual dysfunction had an even greater adverse impact on quality of life than urinary incontinence.3

Male sexual dysfunction related to prostate cancer treatment can be divided into three broad categories: (i) erectile dysfunction (ED) and changes in penile size and shape; (ii) ejaculatory and orgasmic dysfunctions; and (iii) psychosexual impairment with changes in sexual desire, intimacy and mental health. There has been considerable interest in ED after diagnosis and treatment of prostate cancer over the past decade with an increase in published articles on the subject and an increase in media coverage.4-7 In this review, we aim to provide a scientific review of ED related to prostate cancer treatment and to evaluate the various treatment strategies, including the concept of penile rehabilitation in men who wish to remain sexually active after treatment.

The true incidence of ED after prostate cancer therapy is unknown, and the recovery of erectile function is difficult to compare when reviewing clinical studies. Most of the literature pertaining to ED after prostate cancer therapy is derived from the cohort of men who have had radical prostatectomy (RP). Contemporary literature reports rates of ED after RP of around 60%–70%4,6,8 and many studies lack essential data such as the use of patient self-reported questionnaires, while others have too many variables such as the definition of ED, the definition of return of erectile function, the use of erectogenic medication and the use of multimodal prostate cancer therapy.4-7 Recent advances in the knowledge of the functional and topographic anatomy of the prostate gland as well as innovations in surgical technology have resulted in improved preservation of postoperative erectile function. However, the scientific literature still largely lacks studies that rigorously compare different surgical techniques and technologies, including the assertion that laparoscopic/robotic RPs are better at preserving erectile function.4-6,8 It is known that the recovery of erectile function after RP can take up to 48 months,9 and that the time of erection recovery varies, as does recovery of erectile strength. Factors such as the age of the patient, the level of erectile function before treatment, the extent of surgical neurovascular preservation and changes to erectile haemodynamics during surgery all contribute to the outcome.10 More recent studies have shown that higher sexual health-related quality of life scores before treatment, younger age, lower serum PSA levels, race or ethnicity, lower body mass index and defined intended treatment details were associated with better functional erections at 2 years irrespective of the type of prostate cancer treatment.11 By contrast, studies have shown that ED induced by radiation therapy continues to develop for up to about 3 years, and that the actual rates of ED between RP and radiation groups are similar.12 It would also appear that brachytherapy may confer better preservation of erectile function scores compared with external beam radiotherapy, and that hormone therapy alone or in combination with external beam therapy significantly increases the risk of ED.4

Several theories have been proposed for the cause of ED after RP, and these include cavernous nerve injury, vascular compromise (eg, accessory pudendal artery ligation), damage to nearby structures, local inflammatory changes relating to surgical and radiation effects, cavernosal smooth muscle hypoxia with ensuing smooth muscle apoptosis and fibrosis, and corporal veno-occlusive dysfunction causing venous leakage.4,5,10

Another common complaint among men who have undergone prostate cancer treatment is the loss of penile length and girth. Contemporary literature reports an approximate loss of 2–3 cm of stretched penile length (equating to erect penile length) at 12 months after RP.13 This loss of penile length is often accompanied by other penile deformities such as curvature (Peyronie's disease).14 It is likely that the early loss of penile length after RP is attributed to parasympathetic neural trauma (cavernosal nerve injury) with subsequent sympathetic neural overdrive and the release of various neurotrophic factors, rather than urethral shortening,10 and that this phenomenon is potentially reversible. However, the delayed structural changes relating to underlying corporal cavernosal smooth muscle hypoxia, denervation-induced smooth muscle apoptosis and fibrosis, and the development of Peyronie's disease, can be permanent.4,6

The concept of penile rehabilitation after RP was first introduced in the late 1990s15 and involves not only attempting to confer the ability to achieve erections sufficient for satisfactory sexual intercourse during the rehabilitation phase, but also to return erectile function to the pretreatment state (back-to-baseline). The clinical challenge is determining which treatment option is best for an individual patient, and each treatment has advantages and disadvantages.4,6 The potential benefits and limitations of treatment options are presented in Box 1. All treatment options should be presented to facilitate informed decision making. In this article, we propose a practical penile rehabilitation program for everyday clinical practice based on current understanding and treatment strategies (Box 2). Offering rehabilitation and treating patients early postoperatively, before penile fibrosis develops, is of major importance for recovery of erectile function and sexual continuity.4-6

The advent of the phosphodiesterase type 5 inhibitors (PDE5i) has revolutionised ED treatment, and many studies have shown favourable outcomes with PDE5i therapy in rehabilitating erectile function after nerve-sparing RP. Various penile rehabilitation programs with various PDE5i have been used in clinical practice worldwide.16 Animal studies support the concept of using PDE5i in endothelial and smooth muscle protection, neuromodulation and prevention of corporal fibrosis, and in the preservation and earlier recovery of erectile function.17 To date, there have been two large multicentre randomised double-blind controlled studies examining the role of oral PDE5i in penile rehabilitation after RP.18,19 Unfortunately, these studies reported contrasting outcomes. The first reported that men receiving nightly sildenafil (50 mg or 100 mg) after RP had an increased return of spontaneous erectile function (27% v 4% in the placebo group).18 The second study reported no difference in erectile recovery between on-demand and nightly dosing with vardenafil after RP,19 contradicting the presumed rehabilitation effect of daily (nightly) dosing with PDE5i.

While there is no definite evidence for the best treatment strategy for penile rehabilitation programs using PDE5i,17 most sexual health experts agree that any form of penile rehabilitation using PDE5i should commence as soon as possible to prevent the development of structural alterations from prolonged cavernosal hypoxia and the subsequent veno-occlusive dysfunction from cavernosal fibrosis.20 Although the mechanism of action of PDE5i depends on intact cavernosal nerve function,17 a recent study has shown some benefit of PDE5i therapy in men who have undergone non-nerve-sparing RP, highlighting the role of non-neuronal stimulation of nitric oxide production in penile erection.21

For men who do not respond to therapy with oral PDE5i, second-line therapies such as intracavernosal injections, vacuum erection devices and intraurethral alprostadil suppositories are effective options to preserve and/or regain erectile function. Intraurethral alprostadil is currently unavailable in . Intracavernosal injections using alprostadil (a synthetic prostaglandin E1 derivative) either alone or in combination with other agents such as papaverine and/or phentolamine, are effective in men in whom cavernous nerve-sparing RP could not be achieved22 or those in whom PDE5i are ineffective, not tolerated or contraindicated. Vacuum erection devices are also useful options in men with ED irrespective of nerve-sparing or non-nerve-sparing RP23 and early initiation of a regimen of daily use of a vacuum erection device has been shown to preserve penile length.24 However, long-term use of the vacuum erection device for penile rehabilitation is questionable because of the theoretical risk of potentiating cavernosal fibrosis from prolonged ischaemia, acidosis and lack of smooth muscle relaxation.

In men with medically refractive ED, penile implant surgery offers an option for maintaining sexual functioning and preventing subsequent loss of penile length.25 It would appear that this method of treatment has been significantly underused in men with ED related to prostate cancer treatment26 despite the high satisfaction rate and the fact that some studies have shown that placement of a penile prosthesis at the time of surgery for prostate cancer is associated with higher patient satisfaction rates, greater quality-of-life and erectile function scores and a higher frequency of sexual contact.27

Over the past decade, there has been considerable interest in neuromodulatory therapies such as the use of immunophilin ligands, neurotrophins, growth factors and stem cell therapy to regenerate cavernous nerve and promote axonal regrowth in remaining neural tissue.28 While these neuroregenerative agents show promise in the animal studies, and may be the future of therapy for ED in patients after prostate cancer treatment, many questions remain unanswered as to their long-term efficacy and safety in humans. A single preoperative off-label use of erythropoietin as a neuromodulatory agent has been explored in men undergoing RP, and was associated with significantly higher rate of recovery of functionally relevant erections, but further prospective clinical trials need to be conducted to confirm this outcome.29

Although disease-free survival remains the primary goal of prostate cancer therapy, sexual dysfunction is not an uncommon outcome, and affects a patient's quality of life. Other important aspects of prostate cancer control such as the use of androgen deprivation therapy, radiation therapy and the probable negative impact of these therapies on patients' sexual functioning are equally important and data on these negative effects are lacking in the literature.

The underlying mechanisms leading to ED have been elucidated in various animal models and include neuropraxia, vascular ischaemia and cavernosal apoptosis and fibrosis. Because the current evidence shows that absence of nocturnal and spontaneous erections leads to ED and penile length loss, putting a rehabilitation strategy in place as early as possible is mandatory. The role of penile rehabilitation using PDE5i is still evolving, as the current clinical trials have significant limitations. While there is no consensus on the appropriate PDE5 inhibitor, dose and regimen, its role in combination therapy and the specific cohort of patients, most sexual health experts agree that therapy with an oral PDE5 inhibitor should be started as soon as possible to protect and/or prevent corporal endothelial and smooth muscle damage. Second-line therapies such as intracorporal injection of vasoactive agents and vacuum erection devices should be offered to men who wish to remain sexually active and preserve their penile length, and a penile implant should be considered when patients fail to respond to medical therapies.

Despite several preventive and therapeutic strategies being available, there is no specific recommendation on the optimal rehabilitation or treatment regimen. At present, best practice involves informing patients (i) about the current evidence and (ii) that rehabilitation and treatment for ED following prostate cancer therapy, as early as possible, will result in faster and better recovery of erectile function and preserve sexual continuity. 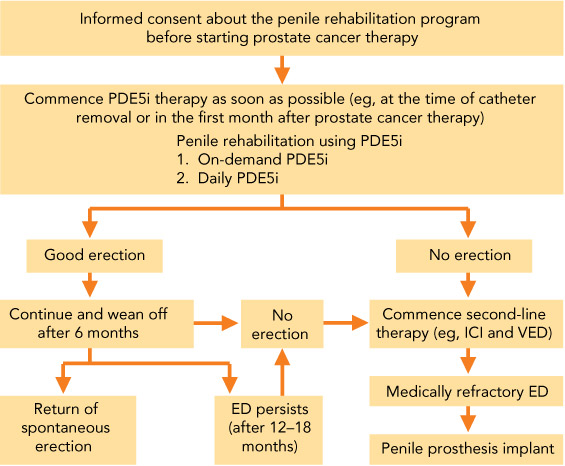