A 63-year-old man presented to the emergency department after an episode of transient left hemiparesis and hemianaesthesia. His only history of allergy was an episode of mild urticaria after a postsurgical fentanyl infusion a few years previously. An intravenous cannula was inserted in his left cubital fossa. His neurological symptoms had resolved completely by the time he was reviewed by the neurology registrar. A magnetic resonance imaging brain scan was planned. The intravenous cannula was flushed with 10 mL of 0.9% normal saline after the rubber cannula connector was wiped with an alcohol-based swab. Within minutes, the patient experienced rapid development of generalised urticaria and periorbital oedema. He was treated with 25 mg of promethazine and 100 mg of intravenous hydrocortisone, with a good response. He had been fasting for 4 hours before this and was given no other medication.

Three days later, the patient was challenged with the same brand and batch of normal saline through a new intravenous cannula inserted in a different site. The cannula connector was again wiped with the same brand of alcohol-based swab before the challenge. A similar reaction, with immediate generalised urticaria (Figure, below), was produced, raising the suspicion of allergy to normal saline. Four hours after the challenge, his serum tryptase level was normal.

The patient was referred for allergy testing. Latex allergy was ruled out through negative skin prick testing and serum-specific IgE. He also tested negative on skin prick and intradermal testing to the specific brand of normal saline that had been used, and there were no additives found in the normal saline. He was then challenged with normal saline given through the same brand of intravenous cannula, with a negative result, thus ruling out hypersensitivity to a coating on the cannula. Finally, he underwent a skin prick test to chlorhexidine 0.1%, which yielded a strongly positive reaction (16 mm wheal, 35 mm flare). It was found that the alcohol-based swab used to wipe the cannula connector contained 70% isopropyl alcohol and 2% chlorhexidine. Chlorhexidine allergy was confirmed with a positive chlorhexidine-specific IgE test (1.0 kU/L; class 2). 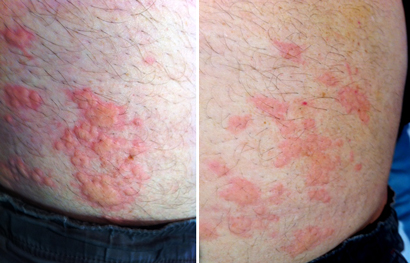 In this case, the cause was not immediately evident, as the chlorhexidine was contained in the alcohol-based swab used to wipe the intravenous administration port. The patient's reaction was initially thought to be caused by hypersensitivity to normal saline, which has been reported only twice in the literature.8,9 Normal saline is isotonic sodium chloride and should not cause an allergic reaction unless there is an additive in the solution. The published reports of normal saline allergy did not include skin prick or intradermal tests, and other potential causes were not adequately excluded. It was only after a series of investigations that our patient was found to be allergic to chlorhexidine. We postulate that a small amount of chlorhexidine from the swab was carried from the surface of the connector through the intravenous cannula while flushing it with normal saline. The patient was likely sensitised to chlorhexidine from exposure during previous hospital admissions. He was issued with a MedicAlert bracelet to prevent future exposure to chlorhexidine in the health care setting and was advised to avoid using mouthwashes and other products containing chlorhexidine.

The amount of chlorhexidine exposure was very small (only 2% in the swab) in this case, which resulted in a significant but not dangerous reaction. Greater exposure to chlorhexidine, such as in surgical preparation or insertion of a coated cannula, could have led to life-threatening anaph ylaxis. Skin prick testing with chlorhexidine was positive in this patient but has relatively low sensitivity; intradermal testing with diluted chlorhexidine is more sensitive. Blood testing for chlorhexidine-specific IgE has high diagnostic sensitivity and specificity.1