Objective: To examine patterns of the sickness certification of workers compensation claimants by general practitioners in Victoria, Australia, by nature of injury or illness.

Main outcome measures: Type (unfit for work, alternative duties, or fit for work) and duration of initial medical certificates relating to workers compensation claims that were issued by GPs, in six categories of injury and illness.

Conclusion: The high proportion of medical certificates recommending complete absence from work presents major challenges in terms of return to work, labour force productivity, the viability of the compensation system, and long-term social and economic development. There is substantial variation in the type and duration of medical certificates issued by GPs. People with mental health conditions are unlikely to receive a certificate recommending alternative duties. Further research is required to understand GP certification behaviour.

The past decade has seen substantial health policy reform aimed at increasing labour force participation by injured and ill workers. Underpinning these reforms is a growing body of evidence showing that safe work is good for health1,2 and that return to work (RTW) after injury or illness can promote recovery.3,4 General practitioners play a key role in the RTW process, being the first point of contact with the health care system for many injured workers, and the main “gatekeepers” to workers compensation and disability benefits.

Understanding the behaviour and attitudes of GPs towards injured and ill workers is an area of growing interest among primary care and work injury researchers. To date, no Australian data on this have been published. Overseas research has shown that, despite most GPs believing that work is generally beneficial for health, there are divergent views among GPs regarding their role in RTW processes.5 Some believe that their focus should be on the medical recovery of the worker, but others acknowledge their role in RTW processes.6 Many GPs do not consider RTW processes and the work–health nexus to be part of their role,7 and some would prefer to have no role in sickness certification.8

Evidence that GP sickness certification practices vary according to worker characteristics is growing. A common finding is that GPs are more likely to certify workers with mental health conditions (MHCs) as unfit for work than those with physical conditions.9,10 Risk factors for longer duration of work incapacity include older age, social deprivation, and presence of mild and severe MHCs.11 Other factors which influence GP attitudes about managing RTW include weak doctor–patient relationships, pressure on consultation time, fears for personal safety, limited knowledge about the patient’s workplace, and the administrative burden of dealing with the compensation system.8,12-14

Much of the research on sickness certification practices has been conducted in discrete clusters of primary care practices in Europe. Certification data can also be obtained from jurisdiction-level databases, which are held by some workers compensation authorities. These have the advantages of population-based data capture and a method for verifying the work-relatedness of workers’ conditions (because only claims for work-related injury and illness are accepted).

We examined patterns of sickness certification of injured and ill workers by GPs in the state of Victoria, Australia, over an 8-year period.

Victoria had a working population of about 2.8 million in June 2011.15 Employers are required to maintain workers compensation insurance through the Victorian WorkCover Authority (VWA) unless they are able to self-insure or obtain insurance through the national workers compensation scheme, or if they are sole traders. All injuries and illnesses that exceed the pecuniary threshold for health care expenses or have required more than 10 days work absence are required to be lodged with the VWA via one of six private insurers.

The Victorian workers compensation system requires production of a medical certificate to accept a compensation claim. Certificates can be submitted by GPs or by hospital-based medical practitioners; they include the practitioner’s recommendation regarding fitness to work, and start and end dates. Initial certificates are handwritten and provided to the injured worker’s employer, who submits the certificate to the insurer. Subsequent certificates can be provided directly to the insurer and the employer. The insurer enters certificate data into a standardised database. This information is transferred to the VWA with other claim information, enabling statewide capture of medical certification data.

Medical certificate data were not routinely captured by the VWA before 1 January 2003. At the time of analysis, the database contained complete information for all workers compensation claims up to 31 December 2010. All data for accepted compensation claims lodged by working age adults (15 to 65 years) with a date of injury or illness between 1 January 2003 and 31 December 2010 were extracted. Claims were then excluded if: they were for health care expenses only (ie, income replacement benefits were not paid); the initial medical certificate was written by a health practitioner other than a GP; or the information contained errors in logic (eg, date of certificate issue preceded date of injury).

Rates of certification were calculated for each injury and illness category and type of certificate. The numbers of certificates issued were divided by the number of full-time workers in the state in the 2006–07 financial year (about 1.79 million).15 This year was chosen as it was the midpoint of the study period. Rates are presented per 1000 workers with 95% confidence intervals.

Descriptive statistics were used to analyse the data. Analyses of variance and χ2 tests for independence were used to examine differences between medical certificates across injury and illness categories. Kruskal–Wallis and Mann–Whitney U tests were used to compare certificate duration between groups. Post-hoc tests were used to evaluate pairwise differences between injury and illness categories for each type of certificate. Type 1 errors were controlled using the Bonferroni approach, setting the level of significance to P = 0.0033. SPSS version 20.0 (IBM) was used for all analyses.

There were significant differences in types of certificates issued in all injury and illness categories (χ2 = 6759.6, df = 10, n = 124 424, P < 0.001). Post-hoc comparisons revealed that there were also significant differences between all pairs of injury and illness categories, except for fractures versus other traumatic injuries.

The median and first and third quartile values for initial medical certificate duration by certificate type and injury and illness category are shown in Box 2. Alternative-duties certificates were significantly longer in duration than unfit-for-work certificates in all injury and illness categories (χ2 = 62.44, df = 1, n = 120 509, P < 0.001). However, duration varied between the categories; for example, certificates issued to workers with musculoskeletal injuries and diseases, back pain and strains and other traumatic injuries were of lesser median duration than those issued to workers with fractures, MHCs and other diseases.

From 2003 to 2010 in Victoria, more than 70% of initial medical certificates issued by GPs for injured and ill workers were unfit-for-work certificates, and fewer than a quarter recommended alternative duties. This is an important finding in the context of growing evidence regarding the health benefits of work,1,18 the importance of workforce participation for social and economic development,2 and the potential health and economic benefits of early RTW.3

The rate of sickness certification per 1000 workers varied substantially between injury and illness categories. The highest proportion of unfit-for-work certificates were written for workers with a MHC, followed by fractures, other traumatic injuries, back pain and strains, musculoskeletal injuries and diseases, and other diseases. Recent studies in the United Kingdom have also shown that GPs are more likely to issue unfit-for-work certificates for patients with MHCs than other conditions.9,10 Conversely, GPs in our study were more likely to certify workers with other diseases as suitable for alternative duties than those in other categories. Our data also show that the median duration of unfit-for-work certificates issued by GPs to patients with MHCs is longer than in patients with musculoskeletal injuries and diseases, back pain and other traumatic injuries.

There is a stigma associated with mental illness that may influence pursuit of workers compensation claims among workers with MHCs.19 Health professionals are more likely to perceive people with mental illness as having poorer health outcomes than they really have.20 There is often confusion about when a worker with a MHC should resume work, and workplace accommodations are often not in place to facilitate the RTW process.21 The ability of a workplace to accommodate an injured or ill worker may influence GP certification behaviour.

We also found substantial sex differences. Women with MHCs were more likely to receive certificates than men, but men received a greater proportion of certificates in all other categories. This is consistent with previous findings showing that women have a proportionately greater burden of sickness absence due to mental illness22 and that women are more susceptible to depression as a result of job stress than men.23

Our data were obtained from a population-based database of injured and ill workers across a diverse range of industries and occupations, and included GPs operating in a diverse range of health care practices. The six categories of injury and illness that we used were derived from a national standard occupational injury classification system.17 To maintain maximum data retention across types of injury and illness, it was necessary to group diverse conditions in some categories, while other categories represented more homogenous clinical populations. Within the more heterogenous categories, there may be wide ranges of expected recovery and RTW trajectories for different conditions. Also, workers compensation data do not include cases where an injured or ill worker does not file a compensation claim. Such cases account for about 23% of work-related conditions for which patients attend Australian GP practices,19 so this study does not represent a complete picture of GP certification practices.

We identified substantial variation in GP practice depending on worker condition. Future research is needed to determine why rates of alternative-duties and fit-for-work certificates among workers with MHCs are less than those for workers with other conditions. It is possible that differences in certification behaviour are due to severity of injury, workplace conditions (eg, lack of appropriate modified duties), challenges in dealing with mental health claims and other factors. 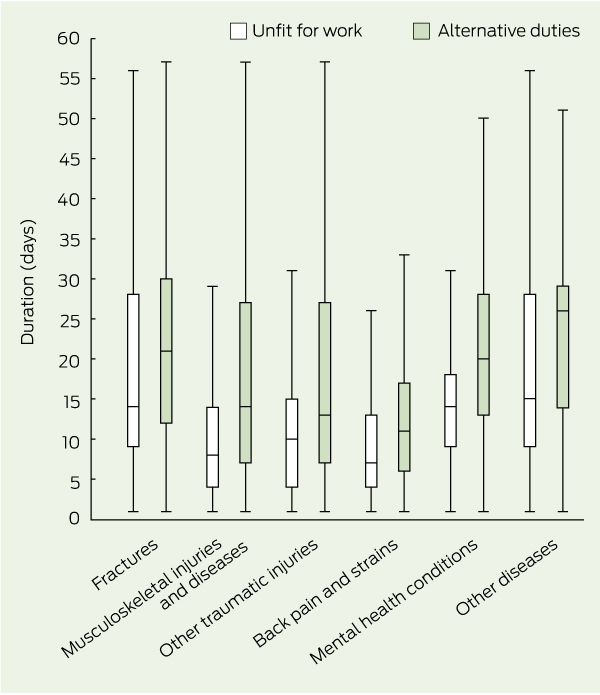 3 Numbers and duration of subsequent medical certificates issued to workers compensation claimants (where initial certificate was issued by a general practitioner), by certificate type and injury and illness category, Victoria, 2003–2010