Design, setting and participants: A review of medical records at a Sydney tertiary referral hospital and a NSW rural Level 2 trauma hospital from 1 January 2006 to 31 December 2010, identified through database searches of appropriate medical record codes and followed by a chart review.

Injuries to the extensor tendon complex at the level of the proximal interphalangeal (PIP) joint are common and may result in stiffness, deformity and loss of hand function.1,2 A number of older patients have presented to our hand surgery unit with open central slip extensor tendon injuries acquired while manoeuvring mobile garbage bins, commonly known as wheelie bins.3

Mobile garbage bins are rectangular bins with two wheels, made from injection-moulded high-density polyethylene. Since being invented in Germany in 1975, mobile garbage bins have largely replaced conventional household garbage bins in Australia, as they have greater storage capacity, increased durability, and can be lifted mechanically.3 The most commonly used residential wheelie bins hold a volume of 240 L and weigh 13 kg when empty. According to Australian Standards, a 240 L mobile garbage bin is designed to hold a load of 96 kg, with a maximum pulling force of 60 newtons on a flat surface when the bin is tilted to an angle requiring a vertical lifting force of 20% extra of the load. The forces required to manoeuvre these bins increase considerably on slopes, steps, uneven ground and textured surfaces.4,5

There is no published literature linking hand injuries to mobile garbage bins, and there is a lack of awareness among both manufacturers and regulatory bodies of this mechanism of injury. Our primary goal in this study is to highlight this pattern of injury.

Although these injuries could be prevented by simple measures such as using smaller bins, reducing loading, and having council-assisted bin handling, we present a simple design modification for the type of bins currently in use that would ensure no such hand injury results from accidental bin overloading and incorrect handling.

We conducted a search of the medical records at Royal North Shore Hospital (a Sydney tertiary referral hospital) and Dubbo Base Hospital (a New South Wales rural Level 2 trauma hospital) for the 5 years from 1 January 2006 until 31 December 2010. We searched for a combination of International statistical classification of diseases and related health problems, 10th revision (ICD-10) codes S60–69 (hand injuries), W18.8, W18.9, W19, W20, W22, W23.8 (fall on same level, struck by object) and Y92.0 (non-institutional [private] residence as the place of occurrence) as these were noted to be the codes used for recent known cases. We reviewed the relevant medical records from the searches and recorded information on mechanism of injury, diagnosis, management and follow-up assessments.

We identified 11 patients with dorsal finger injuries resulting from accidents with mobile garbage bins. The average age of these patients was 75 years and their median age was 83 years. Eight patients required hospital admission and surgery. Nine of the patients were treated for soft tissue injuries to the dorsal PIP joint, including skin loss and damage to or loss of the central slip of the extensor tendon; injuries often involved multiple fingers.

The medical record review revealed similar mechanisms of injury. Patients over-tilted their mobile garbage bins to reduce the pushing or pulling force required to move them. If the weight of the bin exceeded the strength of the patient, especially on a downward slope, the mobile garbage bin pulled away from the patient. Patients typically fell while still gripping the bin handle. When the mobile garbage bin reached a horizontal position, the skin dorsal to the flexed PIP joints was the first structure to come into contact with the ground. The continued horizontal momentum of the bin then caused an abrasion to the dorsum of the PIP joint with associated injuries to underlying bone and soft tissue structures (Box 1). The most consistently described mechanism involved the bin “getting away” or “sliding from under” the patient, followed by abrasion of the hands on the ground under the bin.

Our retrospective chart review shows that finger injuries from accidents related to manual handling of mobile garbage bins are not uncommon. Because prohibitively large numbers of hand injuries are reported, we restricted our search to ICD-10 codes similar to those allocated in previous known cases of dorsal finger injuries resulting from accidents with mobile garbage bins. However, without a specific medical record code for this type of injury, it is unlikely that our search methods captured all of the relevant cases, and this pattern and mechanism of injury may be more common than we were able to show.

Manoeuvring of mobile garbage bins can be dangerous, particularly for older, frail citizens. Those that live in the community may not receive the assistance needed to manoeuvre mobile garbage bins to the kerbside for weekly or fortnightly council pickup. This seems unreasonable when the larger 240 L wheelie bins are rated to carry a load of 96 kg, which might be double the bodyweight of a frail older person.

Launceston City Council provides assistance for older or disabled people who are having difficulty handling their mobile garbage bins.6 Some of these injuries could be prevented if other local governments adopted a similar service, or increased the frequency of garbage collections to reduce the weight of bins.

However, altering the design of mobile garbage bins could largely prevent this mode of injury. We suggest incorporating a plastic flange on both ends of the handlebars (Box 2). Provided this flange is more prominent than a gripped hand, these injuries would not occur by the mechanism described. We recommend that the Australian standards for mobile garbage bin manufacture should be altered to include this simple safety feature.

Most patients in our series achieved satisfactory recovery of hand function, although many required significant use of hospital resources, including hospital admission, surgery, extensive clinical follow-up and hand therapy. These resources could potentially be saved by effective prevention. 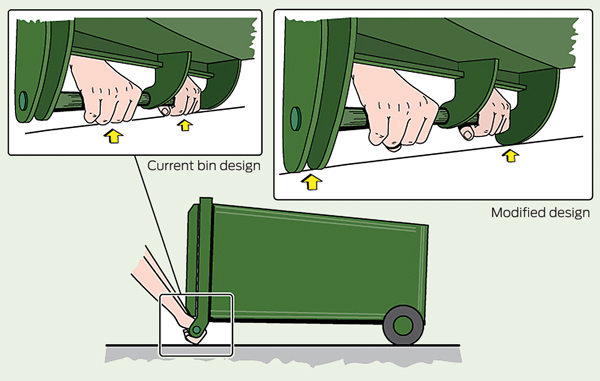