Vitamin B12 and vegetarian diets

Vitamin B12 (cobalamin) is an essential vitamin, required for DNA synthesis (and ultimately cell division) and for maintaining nerve myelin integrity.1 It is found almost exclusively in animal-based products including red meats, poultry, seafood, milk, cheese and eggs. As vitamin B12 is produced by bacteria in the large intestines of animals, plant-based foods are generally not a source of vitamin B12. It is therefore a nutrient of concern for vegetarians and particularly for vegans who choose an entirely plant-based diet. A cross-sectional analysis study involving 689 men found that more than half of vegans and 7% of vegetarians were deficient in vitamin B12.2

Vitamin B12 deficiency can also lead to demyelinisation of peripheral nerves, the spinal cord, cranial nerves and the brain, resulting in nerve damage and neuropsychiatric abnormalities. Neurological symptoms of vitamin B12 deficiency include numbness and tingling of the hands and feet, decreased sensation, difficulties walking, loss of bowel and bladder control, memory loss, dementia, depression, general weakness and psychosis.3,4 Unless detected and treated early, these symptoms can be irreversible.

Digestion and absorption of vitamin B12

Up to 89% of vitamin B12 consumed in the diet is absorbed, although as little as 9% is absorbed from some foods (including eggs).17,18 This relatively high rate of absorption, combined with low daily requirements and the body’s extremely efficient enterohepatic circulation of vitamin B12, contributes to the long period, often years, for a deficiency to become evident. Studies have been inconsistent in linking the duration of following an unsupplemented vegan diet with low serum levels of vitamin B12.2,19 Intestinal absorption is estimated to be saturated at about 1.5–2.0 µg per meal, and bioavailability significantly decreases as intake increases.18

Ageing causes a decreased level of proteases, as well as a reduced level of acid in the stomach. As a result, vitamin B12 is less effectively removed from the food proteins to which it is attached, and food-bound vitamin B12 absorption is diminished.4 The Framingham Offspring Study found that the vitamin B12 from supplements and fortified foods may be more efficiently absorbed than that from meat, fish and poultry.20

Taking a simple diet history can be a useful indicator of vitamin B12 intake and adequacy. However, laboratory analyses provide a much more accurate assessment. Measurement of serum vitamin B12 levels is a common and low-cost method of assessing vitamin B12 status. The earlier method of measuring vitamin B12 using biological assays was unreliable, as both the active and inactive analogues of vitamin B12 were detected, so levels were often overestimated.17 Modern radio isotope and immunoassay methods reliably measure biologically available analogues of vitamin B12. The early measured ranges of acceptable levels of serum vitamin B12 were determined using individuals who were apparently healthy but had potentially marginal levels of vitamin B12. This has resulted in reference intervals probably being set too low to provide a reliable clinical decision. To improve the ability to predict marginal vitamin B12 status, a higher reference interval (> 360 pmol/L) has been proposed.4,22 Objective measures of neurological damage have been found in patients with vitamin B12 levels below 258 pmol/L.23 However, the usual reference interval for vitamin B12 deficiency is < 220 pmol/L. Achieving national and international agreement on the definition of serum vitamin B12 deficiency would provide some clarity for comparison of studies and reduce variability in defining those at risk of deficiency. Internationally, the cut-off for vitamin B12 varies markedly between < 130 pmol/L and < 258 pmol/L.

Box 3 shows the vitamin B12 nutrient reference values for Australia and New Zealand.26 As no recommended dietary intakes (RDIs) are available for infants under 12 months of age, an adequate intake is recommended instead. Vegans at all stages of the life cycle need to ensure an adequate and reliable source of vitamin B12 from fortified foods, or they will require supplementation equivalent to the RDI.

Vegetarians and vitamin B12 status

While reported cases of frank vitamin B12 deficiency in vegetarians or vegans are rare, several studies have found lower vitamin B12 levels in vegans and vegetarians compared with the general population.27,28 The European Prospective Investigation into Cancer and Nutrition (EPIC)-Oxford cohort study found that 121 of 232 vegans (52%), 16 of 231 vegetarians (7%) and one of 226 omnivores (0.4%) were classed as vitamin B12-deficient.2 There was no significant association between age or duration of subjects’ adherence to a vegetarian or vegan diet and the serum levels of vitamin B12.2 Intuitively, it is assumed that prevalence of deficiency increases with a longer duration of vegetarian diet. Although it can take years for deficiency to occur, it is likely that all vegans and anyone who does not regularly consume animal-based foods, and whose diets are unsupplemented or unfortified, will eventually develop vitamin B12 deficiency. Vegetarians and vegans should have their vitamin B12 status regularly assessed to enable early intervention if levels fall too low.

Vegetarian infants and vitamin B12 status

There have been reports of deficiency in the breastfed infants of vegan (or “strict vegetarian”) mothers who did not supplement their diets with vitamin B12, because of the smaller stores of vitamin B12 gained by the infant during pregnancy and the low vitamin B12 content of breastmilk (reflective of the mothers’ serum levels).33,34 Infants have presented with a range of symptoms, often initially signalled by developmental delay.35 Lack of vitamin B12 in the maternal diet during pregnancy has been shown to cause severe retardation of myelination in the nervous system of the infant.36 Visible signs of vitamin B12 deficiency in infants may include involuntary motor movements, dystrophy, weakness, muscular atrophy, loss of tendon reflexes, psychomotor regression, cerebral atrophy, hypotonia and haematological abnormalities.37,38 While supplementation with vitamin B12 results in rapid improvements in laboratory measures of vitamin B12 status, there is continuing research about the long-term effects of deficiency in infants.37

Vitamin B12 in the vegetarian diet

Lacto-ovo-vegetarians will have a reliable source of vitamin B12 in their diet, provided they consume adequate amounts of dairy products and eggs, although their intake is likely to be lower than in meat eaters. However, those who follow a vegan diet will not have a reliable intake unless they consume foods fortified with vitamin B12 or take a supplement.

It was once thought that some plant foods, such as spirulina, and fermented soy products, including tempeh and miso, were dietary sources of vitamin B12, but this has been proven incorrect.39 Recent research has found traces of vitamin B12 in white button mushrooms40 and Korean purple laver (nori),41 but the quantity in a typical serving means that they are not a significant dietary source of this vitamin. An average serving of mushrooms contains about 5% of the RDI, making the quantity required to supply adequate amounts of vitamin B12 to vegetarians impractical. Further, use of Korean laver is unlikely to be widespread in the Australian diet. With the unique exception of these two plant foods,40,41 any vitamin B12 detected in other plant foods is likely to be the inactive analogue, which is of no use to the body and can actually interfere with the absorption of the active form.42

Box 4 shows a sample vegetarian meal plan for a 19–50-year-old woman, which includes food sources typical in a Western-style diet and meets the RDI of vitamin B12 and requirements for other key nutrients (except vitamin D and long-chain omega-3 fatty acids). Excluding or limiting dairy foods or fortified soy milk from the vegetarian diet would necessitate the need for vitamin B12 supplements.

Vitamin B12 added to foods is highly bioavailable, especially in people with vitamin B12 deficiency caused by inadequate dietary intake. An unpublished Australian study (Hokin BD. Vitamin B12 deficiency issues in selected at-risk populations [PhD thesis]. Newcastle: University of Newcastle, 2003) compared the effectiveness of fortified soy milk (two servings of 250 mL/day), soy-based meat analogues (one serving/day), vitamin B12 supplements (one low-dose tablet/day or one high-dose tablet/week) and vitamin B12 intramuscular injections (one injection/month) in raising serum vitamin B12 levels in subjects with deficiency. The study found that fortified foods were superior to the traditional methods of supplementation (intramuscular injections and tablets). Further research would be beneficial to confirm these findings. With inadequate dietary intake being a risk for vegetarians and vegans, further fortification of foods commonly consumed by this population with vitamin B12 would be beneficial and should be considered by the relevant authorities.

In a vegan diet, using a supplement or consuming fortified foods is the only way to obtain vitamin B12. As the body can only absorb a limited amount of vitamin B12 at any one time, it is better to take small doses more often, instead of large doses less often. One study found that small doses of vitamin B12 in the range of 0.1–0.5 µg resulted in absorption ranging between 52% and 97%; doses of 1 µg and 5 µg resulted in mean absorption of 56% and 28%, respectively, while higher doses had even lower absorption, with 10 µg and 50 µg doses resulting in 16% and 3%, respectively, being absorbed.17 While sublingual supplements are often promoted as being more efficiently absorbed, there is no evidence to show that this form of supplement is superior to regular oral vitamin B12.44 Vitamin B12 supplements are not made from animal-based products and are suitable for inclusion in a vegan diet.

Vitamin B12 deficiency is a potential concern for anyone with insufficient dietary intake of vitamin B12, including those adhering to a vegan or vegetarian diet or significantly restricting animal-based foods. Studies have found that vegetarians, particularly vegans, have lower serum vitamin B12 levels, and it is likely that anyone avoiding animal-based foods will eventually become deficient if their diet is not supplemented. All vegans, and lacto-ovo-vegetarians who don’t consume adequate amounts of dairy products or eggs to provide sufficient vitamin B12, should therefore supplement their diet with vitamin B12 from fortified foods or supplements. It is particularly important that pregnant or breastfeeding vegan and vegetarian women consume a reliable source of vitamin B12 to reduce the risk of their baby developing a vitamin B12 deficiency.

1 Causes of vitamin B12 deficiency, with contributing factors 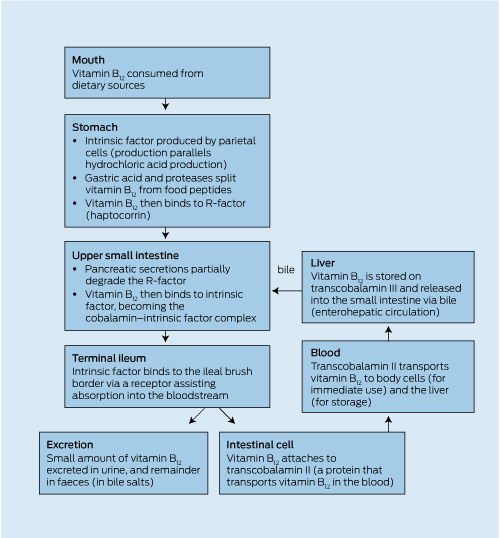 4 A sample vegetarian meal plan designed to meet requirements for vitamin B12 and other key nutrients for a 19–50-year-old woman, showing vitamin B12 content of the foods*

We acknowledge the assistance of dietitians Sue Radd and Rebecca Prior in the early development stages of this article.

Kate Marsh previously consulted for Nuts for Life (Horticulture Australia), who are providing a contribution towards the cost of publishing this supplement. Angela Saunders, Michelle Reid and Melinda Ramsay are employed by Sanitarium Health and Wellbeing, sponsor of this supplement.