The rationale for combining GLP-1 receptor agonists with basal insulin

The progressive nature of type 2 diabetes mellitus (T2DM) dictates the need for an individualised, stepped interventional approach. The current approach to treatment intensification includes the addition of increasingly complex insulin regimens that involve prandial insulin dosing. However, the more intensively diabetes is treated with many of the current treatment options, the greater the risk of hypoglycaemia, weight gain and, possibly, cardiovascular mortality.1-3 One of the key challenges in patient management is how to achieve glycaemic goals while mitigating these risks.

Pharmacological approaches aimed at enhancing the incretin effect in T2DM have been pursued.4 Two main classes of incretin therapies are now in use: glucagon-like peptide-1 (GLP-1) receptor agonists and dipeptidyl peptidase-4 (DPP-4) inhibitors. GLP-1 receptor agonists mimic the effects of endogenous GLP-1; they stimulate glucose-medicated insulin secretion and suppress glucagon secretion (Box 1). But, unlike DPP-4 inhibitors, they have the additional clinical benefits of delaying gastric emptying and decreasing appetite.

The Therapeutic Goods Administration has approved the use of some incretin therapies (the DPP-4 inhibitor saxagliptin and two GLP-1 receptor agonists, exenatide and lixisenatide) as adjunctive therapy in patients with T2DM who have inadequate glycaemic control while taking oral hypoglycaemic therapy and basal insulin. To date, these therapies have not been listed on the Pharmaceutical Benefits Scheme for this indication. Data on the combination of DPP-4 inhibitors and basal insulin have recently been reviewed elsewhere;5 they reduce glycated haemoglobin (HbA1c) levels but have no significant effect on weight. The pharmacological rationale and clinical evidence for combining GLP-1 receptor agonists with basal insulin are presented below.

Basal insulins provide control of fasting glucose; however, their utility in the control of postprandial glucose excursions is limited. Current treatment algorithms advocate the addition of prandial insulin in patients who have not reached their glycaemic targets with basal insulin. T2DM is characterised by impaired insulin secretion, inappropriately high glucagon secretion and increased insulin resistance. Exogenous insulin addresses only one aspect of this pathophysiology. GLP-1 receptor agonists suppress glucagon secretion by α cells, suppress appetite and delay gastric emptying. These effects decrease postprandial glucose excursions, potentially negating the need for prandial insulin. Based on the known mechanisms of action of GLP-1 receptor agonists, their use in combination therapy with basal insulin might offer an alternative approach to aid in maximising HbA1c control, while managing body weight and minimising the risk of hypoglycaemia.

Clinical data from prospective and retrospective studies evaluating the efficacy of exenatide in combination with basal insulin have been summarised in the literature.11 The evidence suggests that this combination provides improvements in HbA1c and postprandial glucose levels, with concomitant weight loss and no marked increase in the risk of hypoglycaemia.11

Retrospective observational and clinical practice studies examining GLP-1 receptor agonists combined with basal insulin have consistently shown improvements in HbA1c levels and body weight, but also increased reports of gastrointestinal side effects.12 Despite their limitations, collectively, these studies provide insight into real-world use of this combination over a period of up to 4 years. They also demonstrate frequent use of this combination in clinical practice before it has received regulatory approval in other markets. For example, the Association of British Clinical Diabetologists real-world audit, in which 315 contributors from 126 centres across the United Kingdom provided data, showed that of the 4857 patients treated with exenatide, 1921 (39.6%) had used it in combination with insulin before this combination was registered.13 Patients on combination therapy comprised those for whom insulin had been continued at exenatide initiation (n = 1257) as well as those for whom insulin was started after exenatide initiation (n = 664). The latter were not included in the data analyses. Over the 12-month period of the audit, adding exenatide to patients continuing on insulin resulted in a mean HbA1c level reduction of 0.51%, weight reduction of 5.8 kg, an insulin dose reduction of 42 units/day and 16.6% of patients stopping insulin use.

Systematic reviews of prospective interventional data, from studies of differing sizes and durations, conclude that the use of GLP-1 receptor agonists as add-on therapy to basal insulin has demonstrable advantages in terms of additional lowering of HbA1c levels without major risk for hypoglycaemia, lower basal insulin requirements, decreased postprandial glucose levels (with or without fasting plasma glucose decreases) and weight loss.12,14 The effects of adding exenatide once weekly to insulin glargine have not yet been assessed in a clinical trial. Box 2 provides a summary of available data from randomised controlled clinical studies in which this combination has been evaluated for 6 months or more.15-20

The question of whether there is a continuing role for GLP-1 receptor agonists when prandial insulin becomes necessary has not yet been answered. Randomised controlled trials (RCTs) have only included patients using basal insulin; however, observational studies have included patients using basal alone,21 basal plus prandial,22 or premixed insulin.23 Of note, in studies that included prandial or premixed insulin, the doses of prandial insulin in particular were decreased, whereas doses of basal insulin generally remained constant, lending further support to the rationale for combining a GLP-1 receptor agonist with basal insulin.

The potential benefits of combining a GLP-1 receptor agonist with basal insulin need to be weighed against tolerability, safety and costs (Box 3). In addition, fixed dosing schedules and the potential impact on the absorption of other drugs should be taken into account.

The most commonly reported adverse events with GLP-1 receptor agonists are gastrointestinal; predominantly nausea, vomiting and diarrhoea. Although these adverse events are reportedly worst at the beginning of treatment and reduce over the duration of the study, they still account for a high proportion of withdrawals from trials.24 A similar gastrointestinal tolerability profile has been noted in studies combining GLP-1 receptor agonists with basal insulin, with nausea being the predominant gastrointestinal adverse event (exenatide, 41% v placebo, 8%;15 lixisenatide, 39.6% v placebo, 4.5%17).

Compared with placebo, higher discontinuation rates due to treatment-emergent adverse events were reported in the basal insulin combination studies with exenatide (9% v placebo, 1%)15 and lixisenatide (9.1% v placebo, 3.2%).17 The current clinical data are limited by the lack of any long-term safety data. In retrospective studies, the frequency of adverse events as a whole was low; however, discontinuation rates due to adverse events were higher (22%–27%) than have been reported in prospective studies.12

GLP-1 receptor agonists do not replace the use of insulin. Identifying responders and non-responders is a clinical challenge; no data are available to aid in predicting who will or will not respond. If patients have not responded within a reasonable time frame, such as 3 months, then the GLP-1 receptor agonist should be stopped. A United States-based retrospective cohort study has shown adherence rates for exenatide and liraglutide to be less than 60%.25 Thus, before stopping therapy it would be pertinent to discuss compliance and administration issues with the patient.

The available data present a strong pharmacological rationale for the combined use of GLP-1 receptor agonists with basal insulin, and these are supported by positive results from short-term clinical trials. Box 4 summarises practical considerations that Australian clinicians should be aware of when considering the use of GLP-1 receptor agonists in combination with basal insulin. The combination may be of particular value for patients who are overweight and for those in whom hypoglycaemia is an especially worrisome potential adverse effect. Although cost and gastrointestinal side effect profiles should be taken into account when considering this combination, it is likely to be an important therapeutic option for T2DM in the future. 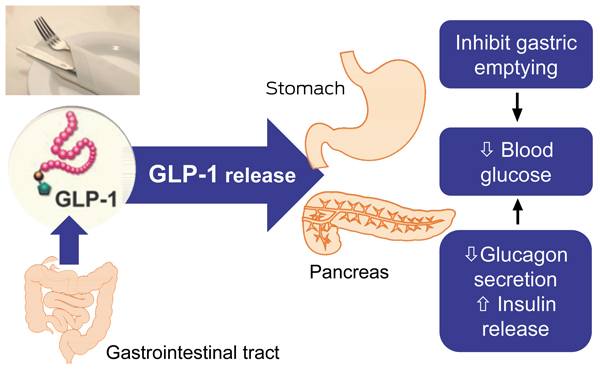 GLP-1 is released within minutes of eating a meal, stimulating insulin release and suppressing glucagon secretion.

This work has been carried out with financial support from Sanofi Australia. The sponsor reviewed the final manuscript before submission. We acknowledge the editorial assistance provided by a professional medical writer, Hazel Palmer of Scius Solutions, whose contribution was funded by Sanofi Australia.