Objective: To determine the effect of the Mental Health Positive Parenting Program (MHPPP) on parenting practices of parents reporting a mental health problem.

Design, setting and participants: A prospective before-and-after examination of positive parenting skills and parent-reported child outcomes among parents of children aged 2–10 years who had self-reported a mental health problem. One hundred and eleven (85.4%) of 130 parents who commenced the MHPPP completed the program. Of these, 77.5% (n = 86) completed both before- and after-intervention measures. The MHPPP was conducted across four community health centres.

Intervention: A 10-week intervention was tailored to parents with a mental health problem. The intervention was divided into a 6-week group parenting program based on the Positive Parenting Program and four weekly home visits.

Conclusions: Our findings suggest the MHPPP can reduce the number of dysfunctional parenting strategies and parent-reported child behavioural problems. The MHPPP is a promising avenue for early intervention in this population.

In Australia, about 23% of children live in households where at least one parent has a mental health issue.1 While many parents with a mental illness are able to cope well with parenting and some children show little, if any, adverse outcomes,2 there is a strong association between parental mental illness and poor outcomes in children.3 Many parents with mental health problems are reluctant to seek help because of the stigma that surrounds mental illness.4 This stigma is often associated with the fear of custody loss and can keep parents from acknowledging problems, particularly in relation to parenting and requesting services.4-6

Of the interventions targeting family relationships and parenting in families, behavioural family interventions founded on social learning models have the greatest empirical support.7,8 The Positive Parenting Program (Triple P)9 is a well established behavioural family intervention that has been successfully adapted to a number of different populations. Some of these include overweight and obese children,10 Indigenous families11 and working parents.12 Currently, there are very limited parenting interventions available for parents with mental illness.

In recognising the need for such services, Central Coast Children and Young People’s Mental Health (CYPMH) developed the Mental Health Positive Parenting Program (MHPPP).13 The MHPPP is an adaptation of the Triple P, retaining the four fundamental sessions and incorporating an additional two sessions: “The impact of mental health on parenting” and “Children’s fears, friendships and schooling”. These sessions were developed from recommendations from both clinicians and parents with mental illness who completed the Triple P in an earlier intervention.14 “The impact of mental health on parenting” involves parents exploring their thoughts, feelings and behaviours when they are unwell in the context of their parenting, then linking their responses back to the Triple P principles. This process aims to increase parental insight and encourages them to plan parenting strategies to manage future periods of being unwell. “Children’s fears, friendships and schooling” involves parents identifying appropriate expectations of children across different ages regarding their fears, friendships and schooling. This allows parents to identify common concerns and apply parenting strategies that support children’s development in these areas. The MHPPP also varies from the Triple P in that it replaces the four follow-up phone calls with four weekly home visits. This allows facilitators to assist parents to apply their learnt skills in the home environment, model effective parenting strategies and create opportunities to talk directly with children, where appropriate, about their parent’s mental health problem.

In 2005, CYPMH ran a pilot study of 19 families, to investigate the effectiveness of the MHPPP.13 The pilot study found that following the MHPPP, parents with mental health issues reported a reduction in both dysfunctional parenting strategies and children’s behavioural problems. As a result of these encouraging findings, the present study aimed to replicate the pilot study with a larger sample and across a greater number of settings. We report a before- and after-intervention evaluation of the MHPPP with a larger sample of parents with mental health problems.

The MHPPP is a 10-week intervention adapted from the Triple P for parents who have mental health problems. The MHPPP consists of a 6-week group parenting program followed by four weekly home visits.

A detailed explanation of the participant criteria has previously been provided.13 Principally, participants were eligible if they were parents of children aged 2–10 years and self-reported a mental health problem. The referral pathways by which participants were recruited are shown in Box 1.

The Parenting Scale (PS)19 is a 30-item self-report measure that assesses parent discipline practices. The PS requires parents to indicate their tendencies to employ each of the discipline strategies on a 7-point Likert scale from 1 (high probability of selecting an effective discipline strategy) to 7 (high probability of selecting an ineffective discipline strategy). PS scores above 3.2 for laxness, 3.1 for over-reactivity and 4.1 for verbosity are considered to be in the clinical range.19 The PS has good reliability, with high test–retest reliability over a 2-week period in a combined sample of clinical and non-clinical children (laxness, r = 0.83; over-reactivity, r = 0.82; verbosity, r = 0.79).19 The PS has good concurrent and convergent validity.19

Statistical analysis was undertaken using SPSS version 19.0 (SPSS Inc, Chicago, Ill, USA). Comparisons of sample characteristics were performed using χ2 tests and independent-sample t tests. Due to the skewness of some of the outcome variables, within-group comparisons were assessed using Wilcoxon signed rank tests with critical α level set at 0.005 (ie, Bonferroni adjustment of 0.05/10). A series of McNemar’s tests were performed to examine the number of parents scoring in the clinical range on each of the outcome variables before and after the MHPPP.

There were no significant differences between the characteristics of parents who completed the before- and after-MHPPP measures and of those who did not complete the measures (Box 3).

Our findings suggest that the MHPPP can successfully reduce children’s behavioural problems, as reported by their parents, as well as the number of dysfunctional parenting strategies. A decrease across all three of the parenting subscales indicates a greater understanding of child behaviour, increased parental self-control and motivation, and improved skills in communication; all of which are essential to creating a responsive and nurturing environment for children. Following the MHPPP, significantly fewer parents scored their parenting styles and children’s behaviour in the clinical range. This suggests that the program may be effective for parents who report a clinically high number of dysfunctional parenting strategies, and also for parents of children with clinically high behavioural problems.

The results are consistent with our earlier pilot study,13 providing further support for the effectiveness of the MHPPP. The results are also consistent with positive outcomes from studies using adapted versions of the Triple P for different target populations.10-12 Our findings provide preliminary support that an adapted version of the Triple P can be helpful for parents with mental health problems. It is therefore a promising avenue for early intervention in this population.

There are a number of limitations to our study. First, we did not include long-term follow-up measures and therefore are unable to comment on the durability of the intervention effects. However, Triple P has been demonstrated to be well maintained over time, and given the MHPPP is based largely on the Triple P, it is feasible that we would be able to achieve similar results.20 Second, the before-and-after-intervention study design, without a control group, means that we cannot determine the effectiveness of the MHPPP. It is possible that the MHPPP provided no advantage over the basic Triple P. Third, parental mental health problems were self-reported, which means that we may not have accurate information to meet diagnostic criteria. Further, we did not measure the severity of parental mental health problems and are thus unable to report on the degree of impairment in the sample and whether it affected the results.

In recommending that future studies address these issues, there are further avenues that could be explored. For instance, an investigation of parent and child characteristics to determine who would be best suited to the MHPPP. An investigation of the home-visit component would also be useful, to fully understand its role in the success of the intervention. Finally, a more detailed exploration of child outcomes would provide the MHPPP with evidence to inform best practice for the Children of Parents with Mental Illness national initiative. 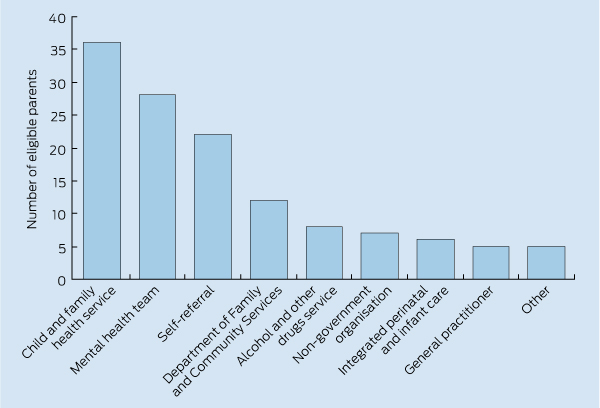 * Data missing for one participant. 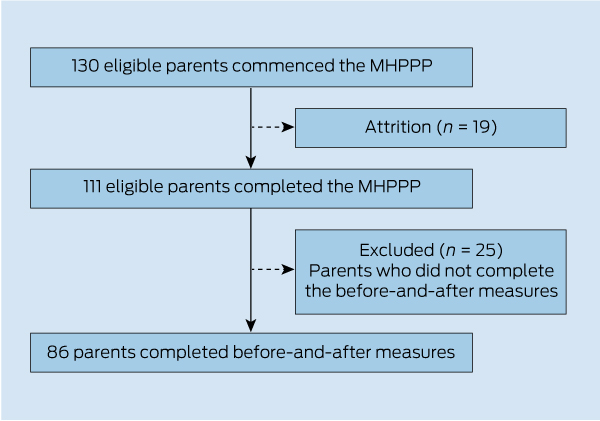 3 Characteristics of parents who completed the before-and-after measures for the Mental Health Positive Parenting Program (study sample), compared with those who did not (excluded sample)