Access to the Commonwealth electoral roll for medical research

The Commonwealth electoral roll (ER) is the best source of representative samples of Australian adults for public health research purposes.1,2 The Commonwealth Electoral Act 1918 provides that ER data may be released for medical research in accordance with national privacy guidelines,3,4 on request and payment of a fee.5 The Australian Electoral Commission (AEC) relies on the Federal Privacy Commissioner’s definition of medical research when making decisions regarding the disclosure of elector information.6

In July 2010, we sought a random sample of 9000 electors from the AEC for a study seeking to establish the views of Australians on privacy and participation in epidemiological research. The study was funded by the National Health and Medical Research Council (NHMRC) and approved by Monash University Human Research Ethics Committee (MUHREC). Over the next year, despite our cooperation in responding to numerous requests, the AEC refused to provide the sample. The AEC expressed two major concerns: that MUHREC did not have the expertise to deal with privacy issues and that our study was not medical research.

Expertise of the university ethics committee

The AEC claimed that MUHREC did not meet the privacy guideline requirements established pursuant to s 95 of the Privacy Act 1988 (Cwlth), as it failed to satisfy the AEC that its members had the qualifications and experience to deal with privacy. The AEC also claimed that MUHREC did not provide evidence that it had weighed the public interest in the study against the public interest in maintaining the privacy of ER data, or explain how and why it reached its conclusions.

Monash University is confident MUHREC functions in accordance with all relevant requirements.7 It is far from clear why it should be necessary to provide the AEC with evidence of the qualifications and expertise of MUHREC members, or the content of deliberations and reasons for decisions. It cannot be the AEC’s role to second-guess the university’s compliance with requirements of a third party. Nonetheless, this evidence was provided to the AEC.

We obtained an informal opinion from the NHMRC, which confirmed that, in its view, the research was medical research.

There is little empirical research about why Australians choose to participate in epidemiological research or how sensitive they are about researchers accessing their health information. Our study aimed to provide reliable evidence on which to base ethical decision making concerning the balance to be struck between protecting privacy and the conduct of epidemiological research. While the research does not investigate illness or treatments, its findings could make a contribution to the conduct of health research and thus to health.

Other researchers have reported similar experiences. The AEC’s interpretation of medical research may have led to decreased numbers of researchers requesting or receiving ER data. In the 2010–11 financial year, the AEC granted nine ER extracts for medical research or health screening purposes. This represents a sharp decline from 45 recipients in 2009–10 and 36 in 2008–09. The Box shows the number of requests granted by the AEC by financial year, derived from the relevant AEC annual reports. The numbers may vary slightly because it is difficult to determine whether multiple requests have been granted for individual studies. The number of requests granted for 2010–11 is out of keeping with the general trend. The number of refusals is not recorded.

The AEC attributes the decline to a decreased number of researchers requesting extracts.2

Personal communications suggest that there may have been an increase in the rate of refusals. Monash University researchers have also been refused access to ER data for research into the safety of domestic greywater because (among other things) the AEC claimed that the study went beyond medical research. Access was refused because the AEC considered that the ER data was to be used “to identify persons who reside in premises with access to greywater” and that information derived from the research might benefit water utilities.

Other universities are experiencing similar problems. Researchers at the University of Melbourne have been refused access to ER data for a project that commenced in the 1990s, for which access was previously granted. An Australian National University researcher stated: “My successful application was finalised on 16 November 2010. Because of the size of the project, we have applied for [electoral] roll data in three separate requests. The first two (both in 2010) were successful. The third was submitted on 8 February 2011 (rejected), 28 February 2011 (rejected), 5 June 2011 (rejected) and last week on 12 December 2011.” A researcher from the University of Newcastle started a project for which access to AEC data had been approved, but has since been refused access. The Australasian Epidemiological Association and the Australasian Faculty of Public Health Medicine have both expressed their concerns to the government.

The AEC is deciding what constitutes medical research, without providing any right of appeal, and it rejects, without further inquiry, the validity of the membership and processes of human research ethics committees (HRECs) and the decisions that they make. Much effort has been expended by researchers in attempting to comply with AEC processes, with little success. Some researchers now rely on less robust sampling methods, which may produce less accurate results.

The primary purpose of the ER is to register the entitlement to vote.2 Under paragraph 1.3 of the NHMRC privacy guidelines,8 the AEC has the discretion to decline to disclose personal information for use in medical research, even when that research has HREC approval consistent with privacy guidelines.9 Nonetheless, the AEC’s interpretation of medical research seems overly restrictive. A more transparent process is desirable.

The release of ER data for medical research should be to applicants whose research is approved by a properly established HREC whose decisions are consistent with the privacy guidelines.8 Neither HRECs nor their approvals need be reinvestigated by the AEC. The AEC is no better placed than an HREC to determine whether medical research meets requisite privacy standards. Additional privacy requirements imposed by the AEC, such as requiring third parties to execute deed polls, are acceptable but should be clearly specified and equitably applied.8

The AEC uses a purposefully narrow definition of medical research, to capture a limited range of research and subject it to enhanced privacy requirements. Concerns about its narrow scope and the need to clarify what medical research means have been discussed since 2003.10 In 2008, the Australian Law Reform Commission recommended that:

In 2009, the Government indicated its support for the Commission’s proposed amendments.12

Prima facie, research should be considered to be medical research if it is funded by the NHMRC or equivalent funding bodies drawn from the Australian Competitive Grants Register. If such research is judged by the AEC not to be medical research, then the AEC should provide its reasons. These reasons should be reviewable first internally and, if necessary, by the Administrative Appeals Tribunal. The addition of a review process will maintain public confidence in the ER by ensuring inappropriate disclosure of elector information is prevented, while more properly reflecting current medical research practice.

It is entirely within the AEC’s discretion whether to release ER information. It is concerning that NHMRC-funded projects that are judged to fulfil ethical requirements are unable to access ER data and proceed as intended. The proposed changes take into account the importance of maintaining the integrity of the ER and preserving individual privacy while also promoting medical research that benefits the health of all Australians.

Number of requests granted by the Australian Electoral Commission, by financial year* 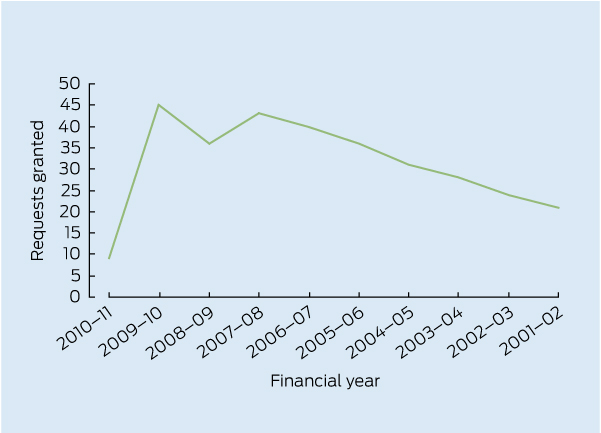