Objectives: To determine whether recruitment of rural students and uptake of extended rural placements are associated with students’ expressed intentions to undertake rural internships and students’ acceptance of rural internships after finishing medical school, and to compare any associations.

Design, setting and participants: Longitudinal study of three successive cohorts (commencing 2005, 2006, 2007) of medical students in the Sydney Medical Program (SMP), University of Sydney, New South Wales, using responses to self-administered questionnaires upon entry to and exit from the Sydney Medical School and data recorded in rolls.

Conclusion: For the three cohorts studied, rural clinical training through extended placements in rural clinical schools had a stronger association than rural background with a preference for, and acceptance of, rural internship.

To encourage the development of a sustainable rural medical workforce, the Australian Government provides incentives for Australian medical schools to recruit students with a rural background and funds rural clinical schools to allow rural exposure via extended placements to students of all backgrounds.

Both recruitment of rural students and uptake of extended rural placements (ERPs) have been shown to be associated with choosing a rural career.1-4 We aimed to compare the apparent association of these two factors on students’ expressed intentions to undertake rural internships and their acceptance of rural internships after finishing medical school.

The Medical Schools Outcomes Database (MSOD) and Longitudinal Tracking Project was established by the Deans of Australian and New Zealand medical schools in 2005.5-6 For the MSOD, all Australian and New Zealand medical students are asked to complete a commencing medical students questionnaire on entry and an exit questionnaire on leaving their university courses. Among other things, the questionnaires cover career aspirations, including the types of setting in which students aspire to practise. The MSOD also follows medical students’ postgraduate trajectories. Our comparison used longitudinal data from three cohorts of students in the Sydney Medical Program (SMP), the 4-year graduate-entry program of the University of Sydney.

We analysed MSOD data5 for the student cohorts that commenced the SMP in 2005, 2006 and 2007 and completed it in 2008, 2009 and 2010, respectively. The variables studied were rural versus urban background, ERP (yes/no), preference for a rural or an urban internship, acceptance of a rural or an urban intern position, and the preferred type of location of future practice.

We used χ2 analysis to assess associations between categorical variables and the McNemar test for repeated data.7 Where cell sizes were too small for valid analysis, the Fisher exact test (FET) P is reported. P < 0.05 was considered significant. Data were analysed using SPSS version 20.0 (SPSS Inc).

An ERP was defined as a 32-week placement in the School of Rural Health (with clinical schools at Dubbo and Orange, in central-west New South Wales) or one of the university’s two Departments of Rural Health (in Lismore, on the NSW North Coast, or Broken Hill, in far-west NSW) over the course of a single 37-week academic year. Students voluntarily applied to undertake an ERP and all students who applied were able to be accommodated. Data on whether individual students had undertaken an ERP were obtained from rolls kept by Sydney Medical School.

Rural or urban background was determined by the item in the commencing questionnaire asking students to nominate the type of location in which they had lived the longest within Australia. Locations were categorised according to the Rural, Remote and Metropolitan Areas (RRMA) classification8 and further grouped as urban or rural (Box 1). We used an answer of yes to “self-perception of rural background” as another measure of rural background.

Future practice location preferences were determined from responses in both the commencing and the exit questionnaires. Locations were mapped to RRMA categories and grouped as urban or rural (Box 1).

Internship first preferences were determined from the exit questionnaire. Students could indicate up to four hospital preferences for their intern year. We used the first preference. Hospital postcodes were categorised using the Australian Standard Geographical Classification — Remoteness Area9 and grouped as urban or rural (Box 1).

Intern positions were determined from MSOD follow-up data and routine enquiries made by clinical schools regarding the locations of the internships taken up by their alumni.

Ethics approval was obtained from the University of Sydney Human Research Ethics Committee (Ref. No. 11436).

Our analysis was confined to students who remained in their original entry cohort throughout the program and completed both the commencing and the exit questionnaires (“respondents”). We excluded students who left their original entry cohort and those who did not complete both questionnaires (Box 2). We followed a total of 448 students from the three cohorts (54.6% of the total number of students enrolling in the 2005, 2006 and 2007 entry cohorts; N = 821). While we did not have access to demographic variables for the cohorts overall, we note that the proportion of respondents who undertook an ERP (98/448; 21.9%) was similar to the proportion overall (156/786; 19.8%).

Of the 448 students followed, 426 (95.1%) responded to the item on self-perception of rural background and 76 of these (17.8%) considered themselves to be from a rural background. The item on the “location of longest residency within Australia” was answered by 415/448 respondents (92.6%), with 73 (17.6%) having lived in a rural location for the longest part of their lives. The difference between classifying rural or urban background based on these two items was not significant (paired data; n = 397; McNemar test χ12 = 0.03; P = 0.86). We based subsequent analyses on location of longest residency within Australia.

The characteristics, experience, preferences and internship locations of the 448 students in the three cohorts are summarised in Box 3. The proportion preferring a rural career dropped by more than one-third between entry into and exit from the program (from 20.7% to 12.5%). ERPs were undertaken by 21.9% (98/448). Ultimately, 8.1% (35/434) of the students accepted a rural internship, although 14.5% (60/415) had indicated in the exit questionnaire that they had a first preference for a rural post.

Our results clearly point to an association between undertaking an ERP and early postgraduate adoption of rural medical practice. Extended rural clinical placements appear to have a stronger association than that of rural background with students’ preference for a rural internship and their acceptance of rural intern posts upon completion of their medical course. We observed that students with rural backgrounds were overrepresented among the students who undertook an ERP, so rural background may have contributed to rural internship preference and uptake in this group. The small numbers of students with a rural background who undertook an extended rural clinical placement preclude a definitive conclusion on whether the two attributes would be additive above the influence of undertaking an extended rural clinical placement. These findings echo the results of cross-sectional studies of student cohorts11,12 and retrospective studies of factors that influenced doctors to enter rural practice in Australia13 and Canada.14

The strength of our conclusions derives from the fact that we used longitudinal follow-up data for three successive cohorts of Australian medical students and obtained information on the end point of taking a rural intern post. By following these cohorts, we were able to compare the apparent influence of an extended rural clinical training experience on students who had a rural background with its influence on those who did not. Our study thus demonstrated the value of the MSOD, which was set up at the time when the first cohort began their medical course. A weakness of our results is that they rely on the experience of the students of only one medical school. Also, the end point of rural internship is an important short-term outcome, but it will be interesting to observe the longer-term career choices of these students through longitudinal MSOD follow-up, or possibly through future linkage with Medical Board of Australia data.

Many possible reasons can be advanced to explain the association between extended rural clinical placements and both the preference for, and the acceptance of, rural internships. These include prior interest in rural medicine among students who choose to take an ERP; appreciation of the educational opportunities that are more likely to be available in rural settings than metropolitan settings, such as interprofessional learning; the smaller numbers of students in rural clinical schools, enabling more direct interaction between teaching staff and students; students’ experience of a closer involvement with the health of rural communities than is possible with metropolitan communities; the broad appeal of the rural environment; and the quality of educational infrastructure that has resulted from consistent funding of rural clinical teaching facilities. The MSOD provides a vehicle for analysis of these possible reasons for the stimulating effect of extended rural placements.

In the meantime, our findings support the Australian Government’s commitment to the funding of rural clinical schools and the provision of financial incentives for medical schools to ensure that at least 25% of each graduating cohort spends one academic year in a rural setting. 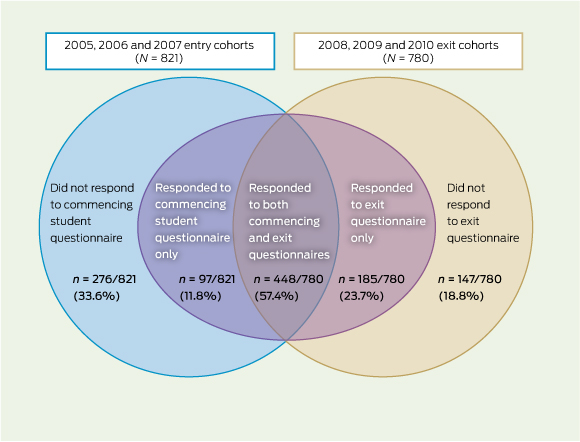 3 Characteristics, experience, preferences and internships of respondents from the 2005, 2006 and 2007 Sydney Medical School entry cohorts (N = 448)

The University of Sydney School of Rural Health, where extended rural placements take place, is funded in part by the Commonwealth’s Rural Clinical Training and Support program.