There is universal agreement that the alcohol-related problems of violence, motor vehicle fatalities and injuries, family disruption and significant ill health are major challenges for the Australian community,1,2 as they are worldwide.3 Concerted action is required to address this.4 In response, Australia’s National Health and Medical Research Council (NHMRC) produced a thoroughly researched document in 2009,5 which updated its 2001 Australian alcohol guidelines.6

The NHMRC guidelines, important as a basis for alcohol policy in Australia, were unbalanced on an important issue: the potential health benefits of one to two standard drinks per day were reported incompletely. In a 118-page report, the potential health benefits of low doses of alcohol were dealt with in less than half a page. It made no comment on the extent of the literature showing that people consuming one to two standard drinks per day have a lower risk of cardiovascular outcomes than abstainers. At the time of the 2009 NHMRC guidelines, there had been over 60 high-quality large-scale studies on alcohol use on over a million subjects and associations with over 94 500 deaths.7,8 This extensive database has widely influenced alcohol policy in many countries and has been the basis of statements on alcohol intake and cardiovascular disease from most national and international health advisory bodies (Box 1).

The NHMRC guidelines appeared to dismiss this extensive evidence base with the statement that “some recent studies have found no significant cardioprotective or all-cause associations” and suggested that any effect may have been overestimated. It relied for this assessment on a single publication that queried the prior research on the apparent cardioprotective effect of low to moderate alcohol intake.9 It has already influenced other Australian bodies in their alcohol policy; it is repeated without any update from recent literature in the 2011 position statement of the Cancer Council of Australia, which highlights the potential for low doses of alcohol to cause cancer.10

The dismissal of the cardiovascular and overall mortality benefits of low to moderate intake of alcohol has the potential to bias the debate about the dangers of alcohol in our community. The recent campaigns to publicise the potential for alcohol to cause cancer11,12 have been launched without providing balancing information that drinking alcohol within the limits set by the NHMRC guidelines may have cardiovascular and overall mortality benefits.

Multiple studies from the late 1970s13 onwards have reached a general consensus: people consuming one to two standard drinks per day appear to have a lower cardiovascular event rate than persons abstaining from alcohol; a relationship described as a J-shaped (or U-shaped) curve.14 Estimates of the risk reduction associated with one to two standard drinks per day compared with those abstaining from alcohol have ranged from 20% to 30%.7 Over many years, there have been criticisms of the interpretation of this association, the two most prominent being the possibilities of misclassification of the reference group and confounding from uncontrolled other lifestyle factors. This brief review makes no comment on the important issue of whether the association can be construed as a causal relationship. This question is unlikely to be resolved without a randomised trial.15 Many feasible biological pathways for a possible mechanism of benefit of alcohol have been proposed,16 and beneficial trends in biomarkers with low to moderate intake of alcohol strengthen the case17 but do not prove causation per se. The main focus of this review is whether misclassification of drinking habits explains the J-shaped relationship between alcohol consumption and cardiovascular disease.

In stating that “some recent studies have found no significant cardioprotective or all-cause associations”, the 2009 NHMRC report relied on a 2006 meta-analysis by Fillmore and colleagues9 and an expansion of their views in a 2007 review.18 Their meta-analysis presented a reinterpretation of previous studies, developing and expanding the “sick quitter” hypothesis first developed in 1988 by Shaper and colleagues.19 This interpretation broadly proposes that misclassification of drinking habits may have resulted in more coronary events in the abstainer reference group because it included ex-drinkers with an increased cardiovascular risk because of ill health or increasing age. The sick quitter hypothesis was criticised in several studies carried out during the 1990s. Fillmore and colleagues re-examined the hypothesis using their own methodology to exclude all studies with misclassification errors in the abstainer reference group. However, they took such a strict approach that they identified only seven studies on total mortality and two on coronary heart disease mortality free of the misclassification errors. In this small number of studies, the evidence base remaining failed to confirm the J-shaped relationship between alcohol consumption and cardiovascular events. The conclusion from their analysis was that “future prospective studies should use far greater precision in their assessment of drinking behavior and abstinence”.18 Recent studies confirm the suspicion that that there is indeed a difference between former drinkers and lifetime abstainers in their pattern of ischaemic heart disease (IHD) incidence and mortality, but no evidence that this differentiation makes a substantive difference to the relationship between lower levels of cardiovascular events with a low to moderate intake of alcohol.20 While it is possible that younger adults with a disability may choose an abstinent lifestyle and suffer a higher mortality in adulthood from their disability and not their abstinence, this accounts for only a very small proportion of non-drinkers and is unlikely to contribute substantially to the J-shaped relationship.21

Three recent meta-analyses on incident cardiovascular disease do not support the misclassification hypothesis. A BMJ meta-analysis published in late 2011 represents the most complete meta-analysis to date.22 It found no differences in the extent of relative risk reduction in cardiovascular disease mortality when classification adjustments were made to address the sick quitter misclassification hypothesis. Of the 4235 studies considered and 84 studies involving over one million people included in the final analysis, the pooled estimates showed a lower risk of all-cause mortality for drinkers compared with non-drinkers (relative risk, 0.87; 95% CI, 0.83–0.92). The meta-analysis did not include a graphic representation of the J-curve, but it did report the dose relationships that can be graphed as shown in Box 2, confirming the J-shaped relationship between alcohol intake and cardiovascular morbidity and mortality. A variety of cardiovascular outcomes were examined. The relative risks were no different when active low to moderate drinkers were compared with all abstainers versus lifetime abstainers. The relative risk of experiencing a cardiovascular outcome among those with a light to moderate intake when the reference group was limited to lifetime abstainers was 0.82 (95% CI, 0.78–0.86). The relative risks for incident coronary heart disease were even lower.

This meta-analysis has been criticised by Fillmore and colleagues for including many of the studies that they had previously ranked as statistically inadequate,23 but two other more recent meta-analyses have specifically addressed the question of misclassification. An analysis comparing lifetime abstainers with former drinkers showed that inclusion of former drinkers in the reference group may influence estimates of IHD morbidity, but not estimates of IHD mortality.20 Another meta-analysis, which completely excluded any studies that may have included former drinkers or sick quitters and restricted itself to lifetime abstainers, assessed 38 627 IHD events (mortality or morbidity) among 957 684 participants.24 This thorough analysis showed differential risk curves for sex and end point, but the overall conclusion was that there was a cardioprotective effect with low to moderate alcohol intake. The trends for men and women at the low to moderate end of the scale of daily consumption presented in this analysis are shown in Box 3. When all levels of consumption were analysed with lifetime abstainers as the reference group, the typical J-shaped pattern emerged (Box 2).

The J-shaped association between alcohol consumption and cardiovascular disease applies to regular low to moderate alcohol intake but not to binge drinking. Two recent meta-analyses have demonstrated a lower risk of cardiovascular disease with a regular daily intake of a low to moderate dose of alcohol and a higher risk with infrequent binge drinking.26,27

This brief review is an update of the evidence on whether a regular low to moderate intake of alcohol is associated statistically with a lower risk of coronary heart disease. It does not comment on whether the lower risk implies that a causal relationship is simply because of lifestyle factors unrelated to alcohol intake. While coronary heart disease is the only disease that shows the J-shaped relationship with alcohol,28 the question of whether a low to moderate intake of alcohol is truly protective is unlikely to be resolved without a randomised controlled trial.15 While many explanations for a possible mechanism of benefit of alcohol in coronary heart disease have been proposed,16 they do not prove a causal relationship per se. Extensive meta-analysis of 21 biomarkers strengthened the case for a causal relationship, concluding that favourable changes in cardiovascular biomarkers “provide indirect pathophysiological support for a protective effect of moderate alcohol use on coronary heart disease”.17 While the observational evidence is inconclusive that a low to moderate intake of alcohol is cardioprotective, much of the data on the adverse health effects of alcohol depend on a similar quality of evidence, including the conclusion that it is a carcinogen.29

The evidence for a J-shaped relationship between alcohol consumption and cardiovascular outcomes is extensive. The possibility that the shape of the curve may be due simply to a misclassification of drinking habits, as suggested in the 2009 NHMRC guidelines, has not been supported by recent studies. The overall impact on community health of a 20%–30% lower rate of coronary disease in light to moderate drinkers is likely to be substantial.30 While the J-shaped curve complicates the formulation of public policy on alcohol,31 it cannot be dismissed. 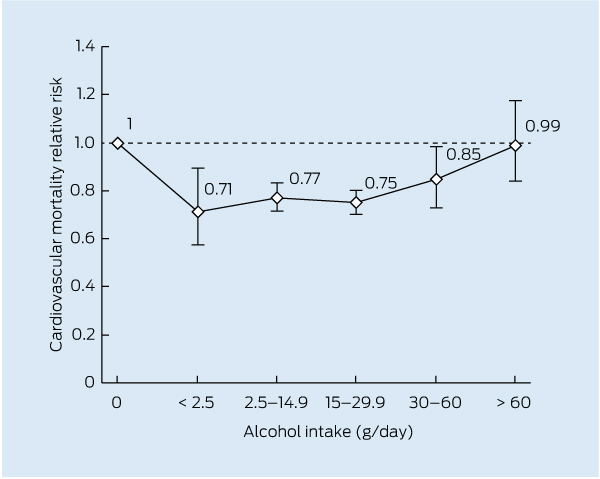 3 Lifetime abstainers compared with occasional and low to moderate consumers of alcohol, showing associations with lower rates of ischaemic heart disease (IHD) morbidity and mortality in men and reduced morbidity in women 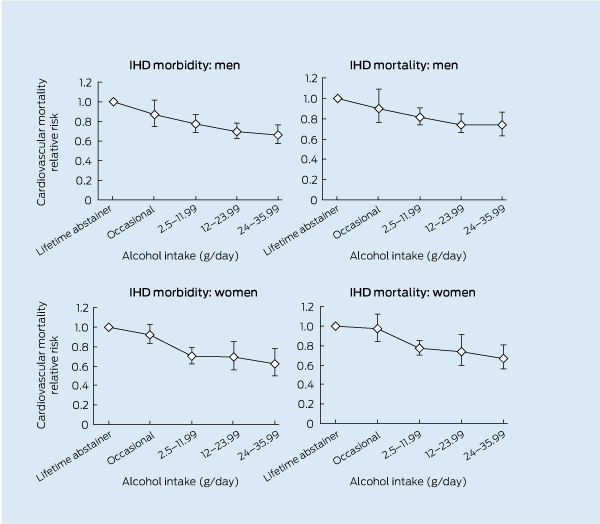 Redrawn from data in Roerecke and Rehm.24

I am owner and director of Thompson Estate vineyard and winery, Margaret River, WA.