Stress-induced takotsubo cardiomyopathy in survivors of the 2011 Queensland floods

We report the first two Australian cases of flood-related takotsubo cardiomyopathy, in patients who were trapped by life-threatening flash floods in and near Toowoomba, Queensland. It is well recognised that events that incite significant physical and emotional stress in individuals can trigger this syndrome, which often mimics acute myocardial infarction.

On 10 January 2011, at about 13:30, the Queensland city of Toowoomba experienced flash flooding caused by intense rainfall over the catchment areas of three creeks that traverse the city.1 When the central business district was hit by “a wave of water”, a 66-year-old female resident became trapped in her flooded and spinning car. She was removed from her car by witnesses. That evening she developed chest pain with associated shortness of breath and palpitations. The pain came and went throughout the night before she attended the local hospital.

On arrival at the hospital she was afebrile, had a regular heart rate (70 beats per minute), a respiratory rate of 20 breaths per minute and blood pressure of 135/80 mmHg. Pulse oximetry indicated her arterial oxygen saturation was 94% at rest. She was overweight. Her jugular venous pressure was 4 cm above the sternal angle. There were two normal heart sounds without extra sounds. Expiratory wheeze and decreased air entry were noted over hyperexpanded lung fields. There was evidence of a minor increase in accessory respiratory muscle use. Examination of other systems was unremarkable. An electrocardiogram (ECG) showed sinus rhythm and normal cardiac axis, PR interval and QRS duration. There was T-wave inversion in leads II, III, aVF and V3–V6. The patient’s serum troponin I level was elevated to 1.3 μg/L (reference interval [RI], < 0.04 μg/L). Results of biochemistry and haematology testing were otherwise unremarkable.

Her respiratory signs improved quickly with administration of inhaled bronchodilators, and she was transferred to our tertiary hospital.

Given the acute stressor event, the elevated cardiac enzyme level, the absence of significant coronary artery stenosis and an apical ballooning pattern of left ventricular dysfunction, we established a diagnosis of takotsubo cardiomyopathy. The patient improved clinically with supportive treatment during her inpatient stay and was discharged on Day 4 with evidence of early recovery of left ventricular systolic function. It was not possible to arrange further follow-up investigations.

Patient 2 was a 68-year-old female resident of the Lockyer Valley, located about 10 kilometres to the east of Toowoomba. At about 14:00 on 10 January 2011, the region experienced extremely rapid flooding of sufficient strength to carry cars.1

The patient and her husband were trapped in their house when flood waters hit, eventually escaping by breaking a window. They held onto a large bird cage until the water receded to avoid being swept away. At about 02:30 the next morning, the patient began to experience chest pain that she described as a “rock in the chest”, associated with shortness of breath. She subsequently presented to the local hospital. The pain did not abate with supplemental oxygen and sublingual glyceryl trinitrate, but resolved spontaneously at 09:00.

The patient was overweight and had a background of treated glaucoma, gastro-oesophageal reflux disease and osteoarthritis. She had no history of coronary artery disease or chest pain syndrome.

On presentation, she was afebrile with a regular heart rate (82 beats per minute), blood pressure of 105/65 mmHg and arterial oxygen saturation measured by pulse oximetry of 99% on room air. Her jugular venous pressure was 3 cm above the sternal angle, and normal first and second heart sounds were present without murmurs or added heart sounds. Adequately ventilated lung fields free of crepitations, rales or crackles were noted. Examination of other systems was unremarkable. An ECG confirmed sinus rhythm (86 beats per minute) and normal cardiac axis and P-wave and QRS-complex morphology. PR and QRS intervals were within normal limits. The corrected QT interval was prolonged (507 ms [RI, < 450 ms]). Chest x-ray showed minor prominence of the pulmonary vasculature without significant signs of heart failure.

The patient was transferred to our tertiary hospital for ongoing assessment and management.

The patient was stable during her inpatient stay. Follow-up clinical and echocardiography assessment established interval improvement in left ventricular systolic function, and her recovery was complete 2 months after presentation. She has remained well at 1 year.

We report the first two Australian cases of flood-related takotsubo (stress-induced) cardiomyopathy, which occurred during the 2011 Queensland floods.

The syndrome was first reported in the Japanese cardiology literature in 1991.2 It is named for the resemblance of left ventricle morphology on ventriculography during the acute phase to that of a Japanese octopus trap and is synonymous with the terms apical ballooning syndrome or ampulla cardiomyopathy. Since the initial description, at least two other accepted ballooning patterns (mid ventricular and basal) have been described.3

Takotsubo cardiomyopathy is colloquially known as “broken heart syndrome” or “stress cardiomyopathy”, acknowledging its frequent association with extreme emotional or physical stressors. The exact mechanism of the acute cardiomyopathy is unclear, but is likely to be secondary to abnormal responses to acute catecholamine surges. Examples of physical stressors include acute respiratory illnesses, administration of exogenous catecholamines (adrenaline, noradrenaline, or dobutamine in patients undergoing stress echocardiography), and acute subarachnoid haemorrhage. Takotsubo cardiomyopathy may occur in patients under general anaesthesia, suggesting an autonomic nervous system mechanism.4 The syndrome most often affects postmenopausal women;3,4 up to 90% have an identifiable stressful trigger event.4 Complete recovery from the syndrome is observed in nearly all cases (96%) within 7 to 37 days.5 Recurrence rates are reported to be between 5% and 10%.6 Mortality rates are low and published cases of death are rare. 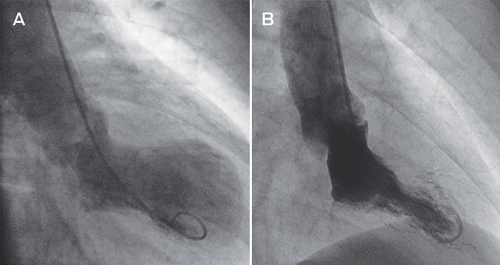