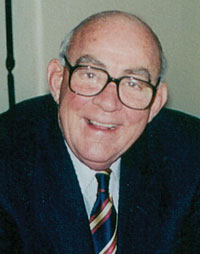 Frank Bell was an outstanding orthopaedic surgeon, known for his strong work ethic, forthright nature and integrity, and excellent teaching and mentoring.

Frank was born on 6 July 1926, the third of five children of Maston and Bessie Bell. He spent his childhood on the family’s 2-acre property in Mount Lawley (now an inner suburb of Perth). His daily chores included helping at the Albany Bell chicken hatchery, chopping wood and milking the cow. He sold lemons to buy himself a horse that he adored; sometimes he rode as far as Scarborough Beach.

Frank gained a scholarship to Perth Modern School in Subiaco, where he appreciated the excellent tutors and mentors, and enjoyed woodworking and metalworking. Despite being told he was not “suitable” for a medical career, he finished with five credits and began his first year of medicine at the University of Western Australia. Along with his cohort, he completed the remaining years at the University of Adelaide, graduating with distinctions and a prize in ophthalmology in 1949.

After working as a registered medical officer at the Royal Adelaide Hospital, he decided to pursue a career in orthopaedics. He returned to Perth to Princess Margaret Hospital for Children and passed the surgical primary exams. In 1953, he travelled to England, where he worked at the Sheffield Children’s Hospital, Sheffield Royal Infirmary and Harlow Wood Orthopaedic Hospital, and obtained Fellowship of the Royal College of Surgeons in 1955.

Frank also worked at the Royal Marsden Hospital in London, where cancer patients with low haemoglobin often required preoperative homologous transfusions. He became interested in the problems and risks of transfusions. Years later, he evaluated the techniques of bloodless surgery that were being developed in the United States, and subsequently helped establish Australia’s first bloodless surgery centre at Kaleeya Hospital in East Fremantle.

On returning to Perth, Frank achieved Fellowship of the Royal Australasian College of Surgeons in 1958, and became a Senior Consultant at Fremantle Hospital. His 33 years at Fremantle Hospital are his major legacy. He developed an outstanding tertiary orthopaedic department and oversaw the teaching of juniors, registrars and nurses, while providing outstanding personal patient service. In 1991, he retired from the hospital and was made an Emeritus Consultant.

He continued his private practice in Fremantle until 2004, and his patients included many post-war migrants, market gardeners and fishermen, who often rewarded his service in kind with deliveries of fresh produce and seafood.

Outside of medicine, Frank enjoyed farming, first at Kalannie and later at his cattle farm in Bullsbrook, where he bred beef calves that frequently topped the market.

Frank died peacefully on 10 September 2012 and is survived by his children Jane, Robert and Kathryn.