Expanding the evidence on cancer screening: the value of scientific, social and ethical perspectives

Experts have called for more attention to the politics, communication and ethics of screening, but there has been limited guidance on how this should be done. In this article, we propose the need for an expanded evidence base for cancer screening policy and practice. This has significant implications for cancer screening research, and for the type of research that could then be considered in evidence reviews and summaries. This approach builds on two ideas previously raised but not yet fully explored in the medical literature.1,2 The first is that we need to better understand why screening happens the way it does, sometimes apparently at odds with evidence of benefits and harms. This requires thinking about screening as a social process involving interest groups, politics, markets, consumers and health professionals. The second is that we need to think more systematically about the ethics of screening. Decades of screening guidelines and research have involved implicit moral judgements, but these have rarely applied formal ethical theory or drawn on empirical ethics research. By applying ethical frameworks and theories to guide research on moral and ethical questions in cancer screening, we will be more able to make ethical judgements on cancer screening policies and practices. We argue that more explicit and systematic investigation of the social and ethical aspects of cancer screening can support better informed and more accountable policy and practice decisions.

While attention to the benefits, harms and costs of cancer screening is essential, it is often insufficient to guide cancer screening policy and practice; for example, on prostate-specific antigen (PSA) screening3 or mammography.4,5 An expanded approach will allow a more comprehensive understanding of the social and ethical implications of cancer screening that would rely on the generation and use of three kinds of evidence:

These three types of evidence, and the knowledge and understanding that they generate, would mutually influence each other, as illustrated in Box 1.

Investigating screening as a social issue

Cancer screening is a complex social process, involving different people, organisations and technologies. Social research is valued in medicine and public health for its ability to answer questions about the way that things happen and what things mean. It generates knowledge about people, their interactions, and the way their actions can be explained in the context of social structures and situations. It examines accounts of individuals’ experiences and perspectives on the world, and observes their actions, how they talk, and the way they use technologies and other material things. It can also examine and explain positions taken and the actions of groups such as social, professional or commercial entities. Interviews, focus groups, direct observations and existing documents (such as policies, websites or newspapers) can all provide data for research to determine how screening is currently occurring, why it is occurring in that way, and what is required to change how it occurs.

Research on how screening programs have developed would explain why implementation is variable, consistent or inconsistent with the evidence base, how screening providers make decisions in the context of uncertainty, and how conflicts have developed. Research on how screening programs are provided can also explain how and why consumers, providers, decisionmakers and commercial interests act in relation to screening. For example, why consumers overestimate screening benefits, how technologies can become entrenched in the absence of evidence, and how financial or institutional interests influence communication about screening. Fletcher has argued that population scientists need “to better communicate with the public if evidence-based recommendations [about screening] are to be heeded by clinicians, patients, and insurers”.2 This can only be achieved through understanding the actions, influences and motivations of all interest groups, and this can be empirically derived and described through systematic and rigorous social research.

Investigating screening as an ethical issue

Ethics is the branch of philosophy focused on moral reasoning and determining right actions; it aims to discover the right thing to do, and to determine why it is right. A number of writers have considered the ethics of screening, but screening research has not routinely considered ethical questions. Formal application of ethical theory in designing screening research could provide frameworks to examine and explain existing moral concerns in screening; expand the scope of what is investigated by introducing concepts and theories to drive new cancer screening research; and make explicit the plurality of values in screening decisions and offer criteria to evaluate whether and how well this plurality has been addressed.

Ethics can provide new tools to address moral concerns that have been troubling screening experts for many decades. For example, Fletcher’s analysis of breast cancer epidemiology,2 the proposal by Harris and colleagues that screening should be evaluated according to the umbrella concept of a “predictor of poor health”,1 or Eddy’s cost-effectiveness analysis decision tables6 all seek to answer a question with moral significance: how can we best maximise the benefits and minimise the harms of intervention? This question is central in utilitarianism, which considers the best actions to be those that generate the greatest utility for the greatest number of people — where utility might be defined as pleasure, happiness or health, or more generically, benefit. The literature about the strengths and weaknesses of utilitarianism can inform how we study the benefits and harms of screening. Traditional approaches to screening have been critiqued as “naively utilitarian”,7 for downplaying the moral significance of harming some to benefit others, and the consequences of service providers failing to disclose the possible harms of screening to recipients. Critiques of utilitarianism might also encourage further study of which benefits and harms count in a decision-making calculus, or the problems and implications of combining qualitatively different benefits and harms into a single metric.8

Other ethical theories emphasise different concerns, such as our moral duty to respect others, and how to balance concerns for individuals with concerns for communities. Such theories encourage explicit examination of the responsibilities of service providers towards screening candidates, empirical evaluation of the moral significance and impact of supporting (or not supporting) the autonomy of those screened, and whether there are any conditions under which mandatory screening might be considered acceptable.

We apply the proposed three-pronged approach to guide cancer screening research to the example of PSA testing (Box 2). This illustrates what types of scientific, social and ethical questions have been investigated to date, although social and ethics research is not often considered as evidence in reviews that guide cancer screening policy and practice. We also suggest questions that could be addressed if the expanded three-dimensional approach to evidence were to be applied to guide new PSA screening research.

The new health technology assessment (HTA) core model for screening technologies developed by the European network for HTA illustrates how an expanded assessment of cancer screening can be operationalised.25 This tool identifies questions for assessing the clinical, economic, ethical and social (which they distinguish from organisational and legal) implications of screening technologies. Although the HTA core model does not explore the interactions between the scientific, social and ethical domains identified in this article, the European approach is significantly broader than that adopted by the American Cancer Society, which focuses on scientific evidence.26 Unfortunately, there are significant gaps in the empirical work required to answer many of the questions posed in the European HTA model, and when appropriate social and ethics research is lacking, answers are sought from brief consultations and expert opinion.25 An expanded social and ethical agenda for cancer screening research would begin to address these gaps in the evidence. This would better support the commencement, provision or discontinuation of screening, inform public communication about screening, and assist citizens’ decisions about screening. As we move towards the second century of cancer screening, we need to ensure accountability to the citizens whose lives are changed, for better and for worse, by cancer screening programs. We believe the approach proposed is necessary to ensure such accountability. 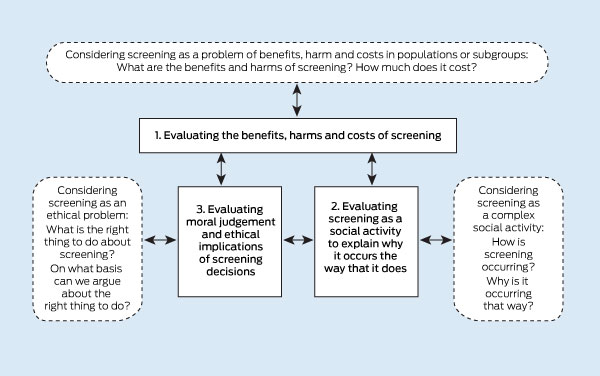 The Screening and Diagnostic Test Evaluation Program is funded by National Health and Medical Research Council (NHMRC) program grants 402764 and 633033. This work was also supported by NHMRC project grant 1023791. Stacy Carter is supported by an NHMRC Career Development Fellowship (1032963).