Design, setting and patients: Retrospective audit of records for patients ≥ 15 years old who had a confirmed diagnosis of type 2 diabetes, received primary health care from DAHS for at least 6 continuous months between 1 July 1999 and 30 June 2009, resided in the Derby area and were not on renal replacement therapy.

Results: Over the 10 years, the proportion of clinical care activities undertaken according to regional protocols increased significantly, with very high levels recorded in the last 3 years (at least 70% of patients had each activity recorded). There were significant improvements in systolic BP, diastolic BP and cholesterol levels over the 10 years (P < 0.001 for all). In the final year, 69% of patients had at least half their BP measurements ≤ 130/80 mmHg and 83% had median annual cholesterol levels of < 5.5 mmol/L. There were small improvements in HbA1c levels that approached statistical significance (P = 0.05). In the final year, 34% of patients had median annual HbA1c levels of ≤ 7.0%.

Conclusions: This study shows that diabetes monitoring and outcomes can be improved and maintained over a 10-year period in a well supported remote Aboriginal community-controlled health service setting.

International and Australian studies show that well structured approaches to diabetes care can improve short-term and intermediate patient outcomes.1,2 While there are several long-term randomised controlled trials aimed at improving intermediate outcomes in people with diabetes,3,4 there is only one published study on the long-term evaluation of a continuous quality improvement (CQI) program in real-world settings of primary health care.5 Ten years after this CQI program was introduced, there was significant improvement in intermediate outcomes and a reduction in microvascular and macrovascular disease in patients with diabetes in Catalonia.5

In Australia, only limited, generally short-term, studies have been published on the effectiveness of real-life service approaches to improving diabetes control. One showed significant improvement in some intermediate outcomes for patients with diabetes in Far North Queensland following the introduction of the “Meriba Zageth for diabetes” plan.6

Derby is a small remote Western Australian town with a harsh seasonal climate, 230 km from the regional centre of Broome and 2350 km from Perth tertiary referral centres. The 2006 census rated the Derby–West Kimberley area as the fifth most disadvantaged in Western Australia.7 Recruitment and retention of skilled professionals in Derby is a constant challenge, with a number of key local services characterised by high staff turnover. Derby Aboriginal Health Service (DAHS) is an Aboriginal community-controlled health service that was established in 1998. Key characteristics of DAHS include whole-of-service involvement in internal CQI processes, use of electronic patient information and recall systems, and regional support and standardisation of care.

We aimed to report on long-term service activity and intermediate clinical outcomes for DAHS Aboriginal and Torres Strait Islander patients with type 2 diabetes.

This study covers 10 audit years, from 1 July 1999 to 30 June 2009. It includes Aboriginal and Torres Strait Islander patients seen at DAHS who had type 2 diabetes mellitus, were ≥ 15 years old, received primary care from DAHS for at least 6 continuous months, lived in or near Derby, and were not on renal replacement therapy.

The final study population was determined by carrying out a comprehensive retrospective review of paper and electronic records. During review of these records, the date of diagnosis of diabetes for each patient was confirmed as far as possible.

In 2007, DAHS staff checked the accuracy of patients’ electronic records against paper records. Results incorrectly recorded or not entered into Project Ferret (Pen Computer Systems), a patient information and recall system, were corrected. From 2007, data entry was monitored more closely. At the end of 2009, data were extracted from Project Ferret and transferred into Excel 2003 (Microsoft). Outliers were identified and data entry errors were corrected. Fewer electronic creatinine results than expected were observed during the audit years 2005–06 and 2006–07 and further corrections, based on paper records, were made. The data were then imported into Stata, version 11 (StataCorp).

The major activities and factors likely to have had a direct impact on the quality of care provided to patients with diabetes at DAHS are listed in Box 1.

After identifying 517 patients with results suggestive of diabetes, 263 were excluded for not meeting the selection criteria (Box 2). Participants who commenced renal replacement therapy, stopped receiving primary care from DAHS or died were not included after these events occurred.

To our knowledge, this is the first published Australian study looking at 10 years of diabetes management in primary care at an individual health service. We showed significant and sustained improvements in health monitoring and intermediate outcomes at DAHS.

Improved care processes, improved control of BP and prevention of complications that result in hospitalisation have previously been demonstrated in Aboriginal community-controlled health services over short periods when adequate clinical support and appropriate management structures have been provided.2,13

The main strength of our study is that we used all recorded results for patients over a 10-year period and analysed clinical outcomes according to clinical targets from current guidelines.11 Comparisons can be made with other studies, but caution is required because of the different methods and clinical targets used. The Australian Primary Care Collaboratives program operates through “waves” of 20–200 practices working together over 18 months,8 while the Audit and Best Practice for Chronic Disease project randomly selected 30 patients with diabetes from each of 62 services and used the most recent value for each patient within 12 months of the audit.9 The currently recommended target for BP is ≤ 130/80 mmHg,11 but previously it was < 130/80 mmHg. In our study, this meant that the proportion of patients with BP complying with target values changed from 53% to 69% in the final year. Similar changes occurred in the Australian National Diabetes Audit and Benchmarking project (54% of patients with BP ≤ 130/80 mmHg in 2009 compared with 38% of patients with BP < 130/80 mmHg in 2006).17,20 The change in HbA1c target (< 7.0% to ≤ 7.0%) made less difference in our study (33% v 34% of patients meeting the respective targets in the final year).

Limitations of this study included underrecording. In the earlier years, this may have contributed to the trend of improvements over time. As part of the CQI processes at DAHS, staff checked the accuracy of the measures reported in this article and updated electronic records, but some bias due to underrecording in the earlier years is likely. Our data on the duration of diabetes may also be biased because of difficulties in determining when diabetes was diagnosed in patients who were diagnosed at other health services. This study was also limited to data that were available; important outcomes, such as hospital admissions and medication usage, were not recorded electronically and more sophisticated measures relating to quality of life were not collected.

Despite the improvements we have shown, there is substantial room for further improvements in clinical outcomes. The focus on preventing or delaying kidney failure in the Kimberley may partly explain why BP control was particularly good in this study. Glycaemic control is considered more difficult to achieve compared with other measures6 and only small improvements in glycaemic control were evident in this study, although even small improvements can be clinically useful. Further investigation is planned to model HbA1c measurements over time for individuals and determine factors that are likely to contribute to individuals attaining and maintaining good glycaemic control.

From 2012, reporting of national key performance indicators (nKPIs) is a requirement for Aboriginal community-controlled health services under the National Indigenous Reform Agreement.21 The nKPIs include the HbA1c and BP measures for patients with diabetes that we included in our study. It is hoped that the use of nKPIs will result in comparable data from Aboriginal health services being produced.

Over the decade covered by our study, a number of policy changes were introduced at a national level which may have had an enabling role for DAHS in chronic disease care for its patients. These include the introduction of Medicare reimbursement for comprehensive Aboriginal and Torres Strait Islander preventive health checks and for chronic disease management planning and follow-up,22 and access to medications at low or no cost for Aboriginal people in remote areas (section 100 of the National Health Act 1953 [Cwlth]).23

DAHS had regular changes in health staff and management, but it also had significant consistency in senior staff over the decade we studied. The service also had improving resources over the study period, although resourcing started from a low base. DAHS maintained its community connections with a consistent board of directors, long-term employment of Aboriginal health workers and nurses, and a focus on genuine comprehensive primary health care for its patients.

Sustainability of chronic disease programs has previously been reported to be a major challenge in remote Aboriginal and Torres Strait Islander health settings.24 This study shows that diabetes monitoring and outcomes can be improved and maintained over a 10-year period in a remote Aboriginal community-controlled health service setting.

1 Major activities and factors likely to have directly affected quality of care provided by DAHS to patients with diabetes, 1999–2009 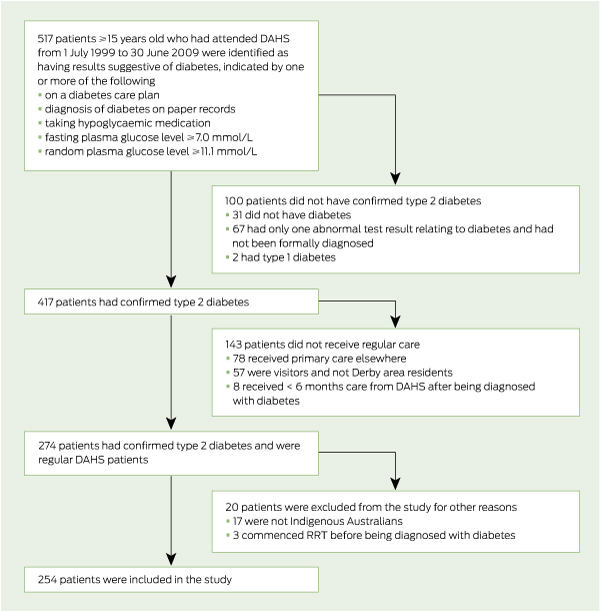 3 Proportions of DAHS study population for whom diabetes management activities were recorded in the electronic patient and information recall system during the 10 audit years, and corresponding values from the final years of other studies

4 Clinical outcome measures of DAHS study population and proportions of those with outcome values that met currently recommended targets during the 10 audit years, and corresponding values from the final years of other studies

This study was initiated and funded by DAHS as part of their CQI program, with in-kind contributions including independent analysis by the Rural Clinical School of WA, at the University of Western Australia, and the Kimberley Aboriginal Medical Services Council. We had full access to all the data (including statistical reports and tables) in the study. We thank staff at DAHS for their efforts in cleaning up the database used in this study. We thank Max Bulsara and Sharon Evans for expert statistical advice and Sophie Couzos and Ian Ring for critical reading of this article.

Carmel Nelson was the Senior Medical Officer (from 1999 to 2005) at DAHS. Vicki O’Donnell is the Chief Executive Officer (from 2002 to present) of DAHS.