Objective: To examine the frequency and causes of snorkelling-related deaths in Australia.

Design, setting and subjects: We conducted a retrospective analysis of snorkelling-related deaths recorded in Australia from 1994 to 2006 inclusive, based on information from the Divers Alert Network Asia–Pacific database, the National Coroners Information System, coronial files from all states and territories, and annual national drowning reports.

Conclusions: In the context of the large population sampled, snorkelling-related deaths are rare. Preventive measures for such deaths could include pre-dive medical assessments for people with a history of cardiac or respiratory disease or with a family history of sudden unexpected death; improved training in how to use snorkelling equipment; better matching of skills to health, fitness and water conditions; better supervision and quality training of supervisors in rescue and resuscitation techniques; and avoidance of hyperventilation before breath-hold diving.

Snorkelling is a popular aquatic activity in Australia. In 2007, there were an estimated 2.2 million snorkelling dives conducted on the Great Barrier Reef alone.1 From the perspective of this exposure denominator, reports of harm from snorkelling are rare, and it can generally be considered a safe activity.

In previous studies in Australia2 and New Zealand,6 most snorkelling-related deaths followed one of two typical scenarios. One scenario was that of a single, sober victim, often a tourist, snorkelling in a small group in relatively calm seas, who was later observed floating, apparently dead. The other involved a relatively young, typically male, spear fisherman who was snorkelling alone or had lost contact with his “buddy” and failed to surface. Some snorkellers died after post-hyperventilation breath-holding. (The practice of taking a series of deep breaths with greater than normal expirations before breath-holding can prolong apnoea by reducing the initial blood carbon dioxide levels, with very little associated increase in oxygenation. This, in turn, delays the stimulus to breathe beyond the point where the diver becomes unconscious from hypoxia.)

The aim of our study was to examine the frequency and causes of snorkelling-related deaths in Australia.

The Divers Alert Network (DAN) Asia–Pacific, based in Melbourne, provides support to injured divers throughout the Asia–Pacific region. It compiles and maintains a database with details of all diving-related deaths in the region.7 These include deaths resulting from snorkelling, scuba and surface-supplied diving activities.

In our analysis, we defined snorkellers as swimmers using a mask and snorkel, whether floating or swimming at the surface, including breath-hold diving.

Historical data were obtained through Project Stickybeak reports compiled by DAN Asia–Pacific between 1996 and 2002.8,9 More recent data (2003–2006) were compiled from the DAN fatality database; information provided by divers, dive operators, police and workplace authorities; newspaper and internet reports; the annual national drowning reports;10 the National Coroners Information System;11 and additional coronial files (for closed cases) from all states and territories of Australia. We began with cases listed in the DAN database, then cross-referenced these with the other information sources.

We reviewed and analysed details of every recorded snorkelling-related death in Australia from 1994 to 2006 inclusive.

Over the 13-year period, we identified 140 snorkelling-related deaths — an average of about 11 per year. Annual frequencies of deaths from 1994 to 2006 are shown in Box 1. In 10 of the 140 cases, forensic pathology details were unavailable, either because the body was never found or there was no autopsy. Characteristics of the remaining 130 victims are summarised in Box 2.

Sixty snorkelling-related deaths were attributed to, or thought likely to be associated with, cardiac causes. Thirty-four of these deaths occurred in people with a known history of cardiac disease or a significant medical history with potential cardiac comorbidity. The remaining 26 victims had no prior cardiac condition or significant medical history, and five of these had no anatomical evidence of cardiac pathology at autopsy. Forensic pathologists experienced in diving cases suggested that the subgroup with no cardiac history and no evidence of cardiac pathology were most likely the victims of dysrhythmias.

The second-highest cause of death after cardiac disease was drowning.

The most common cause of death in snorkellers appears to be cardiac disease. People who die from this cause are typically sober, middle-aged or older males, enjoying the novel experience of supervised group snorkelling. Snorkelling involves potential cardiac stressors, including unaccustomed exertion, the anxiety of a novel experience, autonomic cardiogenic reflexes as part of the diving reflex,12 the effects of cold,13 and pulmonary and cardiac reflexes triggered by inhalation of, or immersion in, water. It is our experience that most novice snorkellers remain on the surface with their masked face immersed and avoid diving. However, most cardiac stresses apply whether a snorkeller is submerged or not.

Intending participants in some tourist snorkelling groups are required to complete a medical declaration that they undertake the risks of snorkelling in the acknowledged context of any pre-existing medical conditions, especially heart disease and asthma. In our study, people who died of cardiac causes were typically well males (median age [males only], 65 years) who were noticed floating silently in the water, often close to others. We call this the “fatal silent snorkelling syndrome”. Cardiac causes of death defined at forensic autopsy include myocardial infarction, valve rupture, previously undiagnosed congenital valvular or coronary artery abnormalities, and unrecognised myocarditis.

Sudden unexpected deaths in healthy young adults are sometimes found to be due to congenital conditions such as prolonged QT syndrome14 and to channelopathies.15 Several studies have indicated that 14%–20% of healthy young adults who die unexpectedly and have no abnormalities detected on autopsy possess genetic mutations causing channelopathies.16 The preventive message here is that, if there is a family history of such deaths, or if there is a personal history of unexplained seizures, it is advisable to consult a medical practitioner before diving in any form. A further message from our research is that, in all such cases of sudden and unexplained death in which no cause is identified at autopsy, the family doctor should consider initiating genetic studies involving first- and second-degree relatives.17

With respect to snorkelling-related deaths in people with no history of cardiac or other medical conditions and no vascular or cardiac pathology at autopsy, we believe that a proportion of such deaths are consistent with dysrhythmias triggered by the diving reflex or tracheal-cardiac vagal reflexes after the inadvertent inhalation of small amounts of sea water. Such dysrhythmias have been known to trigger fatal cardiac-related outcomes in people with pre-existing cardiac disease. Immersion bradycardia (part of the diving reflex) may progress to various types of dysrhythmia, specifically P wave abnormalities and abnormal nodal rhythms.18 We posit that this process may lead to fatal dysrhythmias not only in people who are predisposed by existing coronary disease (eg, coronary artery disease or acute or chronic myopathies), electrical conduction defects or channelopathies, but also in otherwise normal people. Unaccustomed exercise, especially if vigorous, in people in an “at-risk” demographic group for coronary artery disease is a potential trigger for sudden cardiac death, whether due to dysrhythmias or infarction.

Given the enormous denominator of exposure experience in our Australia-wide survey over a 13-year period, we do not wish to overstate the small risk of cardiogenic death while snorkelling, but rather to highlight the increased relative risk of death if pre-existing cardiac disease is known to be present. Some large tourist boats in Queensland carry automated external defibrillators. However, the availability of a defibrillator does not guarantee survival, partly because of the delays in the recognition of a problem and the retrieval of the victim.5 Intending snorkellers with pre-existing cardiac disease or other serious conditions with potential cardiac comorbidity should have a prior medical consultation and be prudent in their physical exertion.

The second major category of deaths was among relatively inexperienced snorkellers who drowned. Many such deaths occur in novices who aspirate water from their snorkel because of a lack of skill. Others are unable to cope with adverse sea conditions (rough or strong currents). These victims are often, but not always, poor swimmers.

However, at least a quarter of the drowning deaths occurred in highly experienced snorkellers. Such deaths often followed hyperventilation before extended breath-holding, with subsequent hypoxic blackout before or immediately after surfacing. Many studies have described these preventable tragedies,2,4,5 in which a misguided diver “blows off” carbon dioxide by hyperventilation. There is then a risk that the normal hypercapnoeic “break point” may occur after the point where hypoxia produces unconsciousness in the submerged diver. If inspiration then occurs while the diver is still submerged, cardiopulmonary reflexes come into play. Hypoxic blackout can also occur without hyperventilation on extended breath-hold dives, especially those involving sustained exercise and ascent.19

Four of the surface drowning deaths occurred in snorkellers with a history of epilepsy. Snorkellers who suffer epileptic seizures are at risk of drowning. Water itself can trigger convulsive seizures, a phenomenon known as “bathing epilepsy”.20 There are two syndromes related to bathing epilepsy: (a) “water immersion epilepsy”, as defined by the International League Against Epilepsy,20 and (b) “hot water epilepsy”. Both syndromes have genetic implications. “Hot water epilepsy” has a particularly strong genetic basis, with recent provisional localisation of the gene concerned (4q24–q28).21 Hyperventilation before swimming underwater may also lead to anoxic seizures after a short (40–90 seconds) and apparently successful underwater swim.22 (The seizures described in this report were anoxic convulsions following hyperventilation coupled with breath-holding.)

Another phenomenon leading to respiratory compromise is that of immersion pulmonary oedema.23 In this potentially fatal syndrome, usually triggered by extreme exertion in the water, pulmonary congestion leads to cough, dyspnoea and haemoptysis. This syndrome, involving surface swimmers, is often associated with extreme exertion, not only in cold but also in warmer waters. Pre-existing diseases such as asthma and diabetes also increase the risk of potentially fatal events during snorkelling and diving.6,24 Most drowning victims identified in our study were either snorkelling alone or had lost contact with a buddy.

Snorkellers who die from trauma often suffer horrific injuries. All three shark attack victims identified in our study were either collecting sea life or close to where sea life was being collected, in areas that sharks were known to frequent. The victim of a crocodile attack was snorkelling in a place known for crocodile activity.

There were some limitations associated with our investigations. It is possible that a few additional fatalities were unreported, and those reported sometimes included incomplete case data. Deaths were sometimes unwitnessed, and reports provided by any witnesses and by police varied in their likely reliability, content and depth, as well as the expertise of the investigators. In addition, autopsy reports are sometimes subject to certain limitations (eg, cardiac arrhythmias may not be detectable on autopsy).

Snorkelling operators should pay careful attention to prescreening participants for apparent health and fitness, anxiety, swimming ability and snorkelling experience to identify those who will need closer supervision. Training in rescue techniques and first aid, including cardiopulmonary resuscitation, is necessary for people who supervise snorkelling activities. Acquiring such skills inspires confidence, sets the delights of snorkelling in perspective and enriches one of life’s pleasurable experiences. 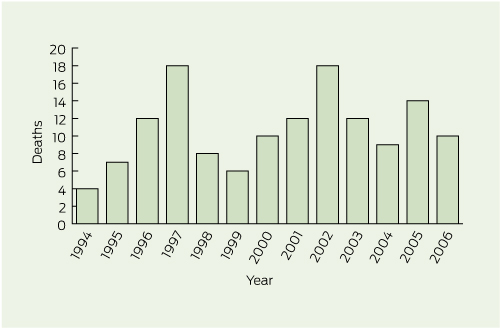 We acknowledge the assistance of the National Coroners Information System and are grateful for access to coronial data from the coroners’ offices of the states and territories. We also acknowledge DAN Asia–Pacific for funding this continued research.