The case for a national intern allocation system in Australia

Completion of a structured internship is a requirement for medical graduates seeking to progress from provisional to general registration in Australia. Despite minor historical variations between states and territories, there is increasing consistency among internship programs across the country. Driving forces behind this include the establishment of a national registration and accreditation scheme,1 the development of an Australian curriculum framework for prevocational training2 and interstate collaborations in education and assessment.3 Further, the Medical Board of Australia has recently moved to develop a national registration standard for granting general registration on completion of internship.4

Work has also commenced on harmonising processes for internship allocation, which vary between jurisdictions in terms of both application and selection procedures. In 2010 and 2011, this was spearheaded by the Confederation of Postgraduate Medical Education Councils with a national audit of internship acceptances.5 The audit process was developed to minimise the number of unfilled vacancies at the start of the internship year resulting from some candidates accepting multiple jobs.

Given that graduate numbers are forecast to increase for several more years,7 competition for internships in popular health services will intensify. It is inevitable that prospective interns will attempt to maximise their chances of securing an internship in a preferred location, and so it follows that the number of candidates applying to multiple jurisdictions is likely to rise.

In this context, the development of a national internship allocation system seems a logical next step. Not only would this obviate the issue of multiple job acceptances, it would be more efficient. A national system would also make the internship application process considerably less cumbersome for graduates applying to several jurisdictions.

It is for these reasons that other countries have adopted various national allocation systems. In the United Kingdom, for instance, graduates apply for entry to prevocational training via the central Foundation Programme Office and nominate their preference of “foundation schools”. Candidates are ranked according to predefined criteria and then offered their highest preference of school with an available place.8 Despite obvious differences in the structure of postgraduate training, the United States also has a national system.9 Operating since 1952, the National Resident Matching Program processed 37 735 applications for 26 158 positions in 2011.10

While there are a number of potential models for a national allocation system, one that protects the autonomy of jurisdictions is likely to be the most acceptable. From the trainee perspective, any national system would need to preserve flexibility and reduce duplication of effort.

A single entry and exit point model meets all of these requirements (Box). This would involve the development of an online “shopfront” portal, managed by a national coordinating body. Applicants would submit one application based on an agreed minimum set of data, and could apply for an internship in as many, or as few, jurisdictions as they wish. Dates and timing of offers would be nationally consistent, but individual jurisdictions would retain responsibility for matching candidates to specific health services. This would require the secure transfer of selected applicant data between national and state-based back-of-house systems. Applicants would receive up to one time-limited offer per jurisdiction, but would be able to accept only a single position nationwide. Subsequent rounds of offers would follow for unmatched candidates.

Notwithstanding the technical barriers to implementation, this model comes with advantages for both prospective interns and health services. For prospective interns, a single entry and exit point would significantly reduce the complexity and confusion associated with applying to multiple states and territories, all of which currently use different systems. This model retains the flexibility to apply to multiple jurisdictions and potentially receive multiple offers.

For jurisdictions and health services, a national system would provide greater certainty about commencing intern numbers (as it would be impossible for a graduate to commit to multiple positions). Job acceptances would be confirmed earlier and there would be no need for annual audits. It would also provide a rich source of data about graduates and their work intentions. This has considerable value at a time when trainee numbers are increasing rapidly.7 Importantly, this particular model avoids the need for jurisdictions to agree on a uniform process for prioritising and selecting candidates.

There are minimal disadvantages with this type of system. For trainees, the capacity to accept multiple positions and delay a final decision would be lost; but from all other perspectives this is probably a desirable outcome. For jurisdictions, there would be establishment costs, particularly in terms of the technical infrastructure required to securely transfer data between local and national systems. There are also concerns that a single entry and exit point model would increase the number of applicants applying to multiple states and territories. The extent to which this will occur is unknown, although it is likely to happen even in the absence of a national allocation system.

On balance, prospective interns would be well served by a national internship allocation system with a single entry and exit point. Although there would be initial costs, the potential benefits present a compelling case for interjurisdictional cooperation. As prevocational training becomes increasingly nationalised, it makes sense to adopt systems that increase efficiency, maximise convenience and ensure certainty for employers. 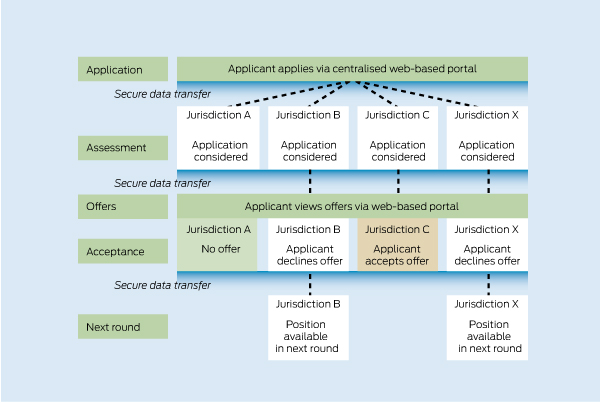 We acknowledge the input of the members and secretariat of the Australian Medical Association Council of Doctors-in-Training (AMACDT) to the development of the AMA Position Statement on National Intern Allocation (available at http://www.ama.com.au/dit).

All authors are former members of AMACDT. Rob Mitchell represents the AMACDT on advisory committees of the Department of Health and Ageing and Health Workforce Australia. Rick Fielke formerly represented the AMACDT on the Confederation of Postgraduate Medical Education Councils National Intern Allocation Working Party. The views expressed in this article are those of the authors.