Trends in reports of child maltreatment in the Northern Territory, 1999–2010

Objective: To examine trends in reports of child maltreatment to the Northern Territory Department of Children and Families among Aboriginal and non-Aboriginal children.

Design, setting and subjects: A historical cohort study using administrative data collections of notifications and substantiated cases of maltreatment among children aged from 0 to 17 years.

Conclusion: There have been considerable increases in both notifications and substantiated cases of child maltreatment, most prominently among Aboriginal children. It is possible that the observed increases reflect increasing incidence of maltreatment; however, they are also consistent with a mix of increased surveillance, improved service access, changes in policy and a shift in public attitudes.

Over the past decade, coroners’ reports and government inquiries have highlighted the extent and tragedy of child maltreatment within Australia.1-3 The high risk among Aboriginal children has attracted particular attention.4-6 An increase in notifications of suspected maltreatment has been both a driver and an outcome of public attention, and by the 2009–10 financial year there were 286 437 notifications involving7 187 314 Australian children. The increase has not been consistent in all jurisdictions, with the Northern Territory showing a threefold increase over 5 years, to 6585 notifications in 2009–10.7

Central to increased community concern for NT children has been the protection of Aboriginal children from sexual abuse. In 2007, the NT report Little children are sacred stated “sexual abuse of Aboriginal children is common, widespread and grossly under-reported”.8 The federal government’s “emergency response” to the release of the report was immediate and controversial,9-11 but the initial emphasis on the identification of sexual abuse was moderated by the recognition that child sexual abuse could neither be identified by a screening test, nor be isolated from the wider risks to children from poverty, unemployment, poor education, poor health, inadequate housing and alcohol misuse. In collaboration with the NT Government, the ongoing response includes programs for housing, income management and improved school participation, and a major expansion in primary health care services.12

After the release of Little children are sacred, the media continued to expose frailties in NT child protection services, which were struggling to cope with the rapid increase in notifications of suspected maltreatment. In 2009, a second inquiry was established, this time to review child protection services. The findings were released in the Growing them strong, together report, which highlighted a service overwhelmed by demand, understaffed, underresourced and demoralised by both actions and inaction.13 The shortcomings of responses by government services to Aboriginal child maltreatment have not been confined to the NT, and inquiries, including those in Western Australia, South Australia and New South Wales, have all drawn attention to the inadequacies of agency responses.4-6

We used NT Government child protection information to examine trends and characteristics of child maltreatment notifications and substantiated cases between 1999 and 2010, in the context of extensive reform and expansion of services.

Administrative information on child protection has been collected in the NT since 1982. The information is used for managing services and is also the source of selected data items that are published annually in national reports.7 A new data record is initiated by a notification to the NT Department of Children and Families of an incident of suspected maltreatment. Each record includes demographic and incident details, and information on any subsequent investigation and substantiation. The type of maltreatment is recorded separately for notifications and any subsequent substantiation as one or more of four standard categories: emotional abuse, physical abuse, sexual abuse and neglect (Box 1). Several types of maltreatment may be recorded for a single notification and any subsequent substantiation. The type of maltreatment considered to be the most immediate risk is recorded as the primary type. If the same incident is reported from more than one source it is recorded as a single notification. Over time, a child may have multiple notifications and substantiations from different incidents.

The sources of notifications were aggregated to seven reporter groups. The relative contribution of each group was calculated for the 4-year time periods, by Indigenous status.

Among non-Aboriginal children, there was also an increase in the notification rate, from 19.7 per 1000 children in 1999 to 41.8 per 1000 in 2010 (10% per year) (Box 3). Again, the greatest proportional increases in notification rates were for emotional abuse and sexual abuse (both 16% per year) (Box 3). Neither the increase over 12 years in the rate of substantiated cases from 4.3 to 6.7 per 1000 nor changes in annual rates for the four types of maltreatment were statistically significant. Physical abuse was the dominant type of substantiated maltreatment among non-Aboriginal children (Box 5).

Number of children reported each year

Notifications by source varied through time (Box 6). For Aboriginal children, reports by police increased 11-fold between 1999–2002 and 2007–2010, and increased as a proportion of all notifications from 12.5% to 27.9%. In contrast, the twofold increase in notifications by community members was less than the general increase and the relative contribution fell from 35.0% to 15.8% of all notifications. There were also shifts in the relative contributions of notification source for non-Aboriginal children. In both populations, the larger increases in notifications by professional groups including police, health professionals and school personnel were in contrast to more modest increases in reporting by community members.

In the most recent period (2007–2010), the leading reporter groups by maltreatment type for Aboriginal children were police for emotional (59.1%) and physical (26.2%) abuse and health professionals for sexual abuse (34.3%) and neglect (27.5%). For non-Aboriginal children, police were again the leading source of notifications for emotional abuse (35.4%), community members for neglect (25.8%) and school personnel for sexual abuse (23.7%) and physical abuse (28.4%).

Our study highlights large increases in both notifications and substantiated cases of child maltreatment in the NT over the 12-year period from 1999 to 2010.

These increases commenced around 2002 when national attention became focused on the maltreatment of Aboriginal children, precipitated by the Gordon Inquiry in WA and reinforced in the following year by Pocock’s report of NT services.4,17 Pocock reported that, despite mandatory obligations, health providers were reluctant to notify child protection agencies of their concerns, for fear of doing greater harm to children.

Other events also provided early momentum for increased NT notifications, including the Bansemer Report in 2003 that recommended increased attention by government services to statutory and moral child protection obligations.18 The recommendation was effected through the Building healthier communities reforms begun in 2004.19

The release of the Little children are sacred report8 in June 2007 precipitated the Australian Government’s Northern Territory National Emergency Response of July 2007. Through this period, there was also legislative reform in the NT that strengthened mandatory reporting obligations in circumstances of both family violence (Domestic and Family Violence Act 2007) and child maltreatment (Care and Protection of Children Act 2007). The new legislation accelerated changes in service response and provided clear guidance for interagency cooperation. The timing of these changes was consistent with the surge in notifications by many of the reporter groups, including health professionals, school personnel and police. The obligations for notification were reinforced during the second NT Inquiry, which during its course called regularly on government services to explain past actions in which children known to services were not protected.

Legislation that underpins mandatory reporting is inconsistent across Australian states and territories, and there are arguments against the rigorous reporting obligations in the NT.20,21 One argument is that it leads to increased reports by the public of less serious incidents and, consequently, a reduction in resources for those children most in need of protection. Another is that mandatory reporting leads to more notifications of the same children. Both of these perceptions are challenged by the results in our study. The greatest increase in notifications was not by the public, but by professional groups (police, health workers, school personnel) and this increase led to more investigations and more cases being identified. The reinforcement of mandatory reporting obligations has contributed to the exposure of a previously unrecorded level of need. This is particularly the case for Aboriginal children, for whom, as described in the Growing them strong, together report, there had been a culture of “normalising the abnormal”.13 The appropriate response to these changes must not be an attempt to reduce identification, but to provide a sufficient and tailored response to meet the varied needs of vulnerable children. In keeping with the social model outlined in the National framework for protecting Australia’s children,22 child protection responses in the NT extend to improved housing, income security and health care access.12

What is also clear from our results is that there were important differences in the patterns of increase across the types of maltreatment. Among Aboriginal children, the increase in emotional abuse was from a low base and is consistent with new obligations for police to report children exposed to family violence. The pattern of substantiated cases of neglect demonstrates a recent surge, which is consistent with a change in reporting practice for conditions such as malnutrition and for children with inadequate parental supervision. Malnu-trition in NT Aboriginal children is not new — “epidemic” levels were documented in the early 1990s23 — however, it is now being recorded as not only a medical condition but also a child protection concern. For physical abuse, the rate of substantiated cases appears to be stabilising, and the rate for sexual abuse in 2010 was the lowest for several years. Notifications have also increased among the non-Aboriginal population, but for all types of maltreatment the ratio of notifications to confirmed cases has been falling, and changes in rates of substantiated cases were not statistically significant.

The analysis of these separate trends in types of maltreatment is important in informing service responses. In the non-Aboriginal population, the stable rate of substantiated cases allows for planning at a more predictable level. By contrast, the rapid increases in both notifications and substantiated cases of maltreatment in the Aboriginal population suggest a need for further expansion of services to address both immediate safety and the wider determinants of maltreatment, while preventing services from being continually overwhelmed.

Child protection data have well recognised limitations. In particular they are not a measure of child maltreatment incidence.24 An analysis is entirely dependent on what is recorded, and as an administrative dataset this will vary between jurisdictions and through time with the policies, practices and resources of the responsible agency. Child maltreatment is loosely defined, and community expectations are changing on what constitutes adequate parenting and the responsibility of government agencies to intervene on a child’s behalf.15 Nonetheless, child protection data are an emerging source for research in Australia, and one that offers the opportunity for a better understanding of the trends and characteristics of maltreatment.25,26 It is information that can assist an understanding of the implications of past policies and services and improve planning for ongoing services for vulnerable children and their families. 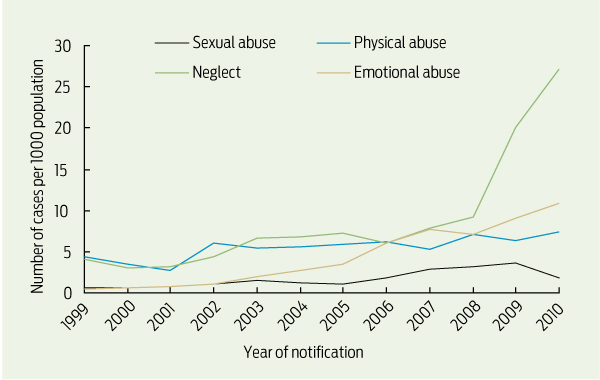 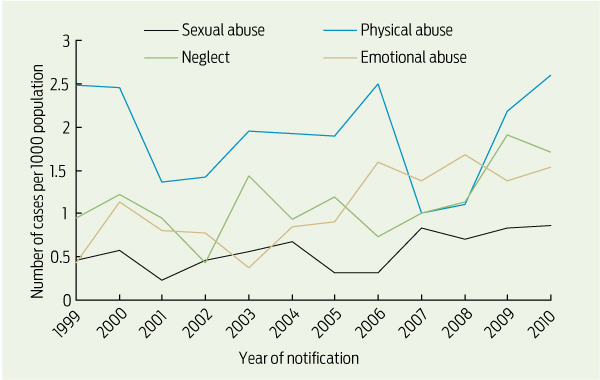 We thank senior managers in the NT Department of Children and Families and Department of Health for their support for this project, and staff for their diligence over many years of recording and maintaining NT child protection information and for the preparation of the research dataset. Steven Guthridge conducted the project during a period of salaried leave from the NT Government. John Lynch is supported by a National Health and Medical Research Council Australia Fellowship.