Objectives: To report the burden and cost of non-melanoma skin cancer (NMSC) treatments in Australia and to project estimates of numbers and costs to 2015.

Design and setting: Retrospective study of data obtained from Medicare Australia for NMSC treated by excision, curettage, laser or cryotherapy between 1 January 1997 and 31 December 2010, by year, sex, age group and state or territory.

Conclusion: NMSC treatments increased by 86% between 1997 and 2010. We anticipate that the number and the total cost without inflation of NMSC treatments will increase by a further 22% between 2010 and 2015. NMSC will remain the most costly cancer and place an increasing burden on the Australian health care system.

Non-melanoma skin cancer (NMSC), which includes basal cell carcinoma (BCC) and squamous cell carcinoma (SCC), is the most common and expensive cancer in Australia1,2 and places a high burden on the population, health care system and government. Australia has the highest incidence of NMSC in the world;3 2% of the Australian population (364 000 people) were treated for NMSC in 2001, with a total expenditure of $264 million making it the most expensive cancer.1 In comparison, colorectal cancer was the second most common cancer in Australia in 2001, with 12 701 new cases and a cost of $235 million.1 The risk of NMSC increases with age, and the ageing of the Australian population may increase the burden of NMSC on the Australian health system.

Unlike other cancers, the two subtypes of NMSC are not reportable to cancer registries in Australia.2 Estimates of the number of treatments and cost of NMSC in Australia have been based on incidence data. The Australian Institute of Health and Welfare (AIHW) used these data to estimate health system expenditures,1 but incidence data count only one instance of NMSC per year for an individual, whereas individuals diagnosed with NMSC tend to have multiple NMSCs.4 Therefore, we were interested in the absolute number of treatments in 1 year and the associated costs.

We aimed to use Medicare data to report the annual numbers of NMSC treatments between 1997 and 2010, calculate the costs associated with these treatments and predict the numbers and costs for the year 2015.

We formatted and analysed the data using Stata version 11.0 (StataCorp).

We calculated age-specific rates of services for each year using population data from the Australian Bureau of Statistics (ABS).6 We fitted separate linear regression models to the age-specific rates of services and extrapolated these rates to 2015. The age-specific rates of services were multiplied by the projected population data (Series B), which were also obtained from the ABS,6 to estimate the number of NMSC treatments for the years 2011 to 2015. We calculated the standard error of the linear predictions (using Stata’s “predict” command) and used these standard errors to calculate the corresponding 95% confidence intervals. Linear extrapolation is the option of choice for short-term predictions of most cancers.7 We assumed that after 1997 no abrupt change in awareness and behaviour among the population occurred, as it did in the 1980s as a result of the start of the Australian Government-funded national skin cancer prevention campaign, “SunSmart”, and that consequently the predictions would be more accurate using data from 1997 onward.8

This study showed a substantial increase in the number of NMSC treatments, the total MBS benefit and total cost of NMSC in Australia between 1997 and 2010, and we predict a further increase between 2010 and 2015.

The increase in the total MBS benefit and total cost of NMSC reflects both population growth and the predicted increase in the total number of services. With 7.20 million residents in 2011, NSW has a larger population than other states in Australia and the highest number of NMSC treatments, and yet Qld, with a total population of 4.56 million in 2011, has a similar MBS benefit cost due to a higher incidence of NMSC.3

Our calculation of the MBS benefit cost is the cost of NMSC to the government and does not include co-payments made by the patient to the treating doctor. Medicare Australia records patient copayments for the purpose of calculating eligibility for benefits through the Extended Medicare Safety Net, a scheme that was introduced in March 2004 to help Australians who were facing substantial out-of-pocket costs for their medical services. These data were not available to us, so we were unable to calculate the total cost to the community of NMSC.

There are three major limitations of our dataset that could result in an underestimation of the disease burden and cost: Medicare Australia does not record data for veterans or patients treated within public hospitals; NMSC cases where treatment was provided by a GP without submission of the specimen for histological examination are not registered; and the extracted data were limited to occasions which were registered by Medicare and, as such, focused on procedures (ie, excision, curettage, laser or cryotherapy). In addition, we have assumed that the intensity of use of different health services (eg, Medicare services associated with NMSC, versus GP visits and hospitalisations) remains constant.

NMSC trends have policy implications with respect to future medical workforce and physical infrastrucure requirements. In addition, continuing support for SunSmart can be evaluated with respect to the divergent NMSC trends between people aged above and below 55 years. In stark contrast to the pre-SunSmart “baby boomers”, the number of NMSC treatments decreased relative to population growth among those aged under 45 years.

Future research will be focused on identifying trends in the incidence of NMSC, the ratio of BCC to SCC, associations between NMSC and other cancers, and the risk of subsequent primary NMSC. 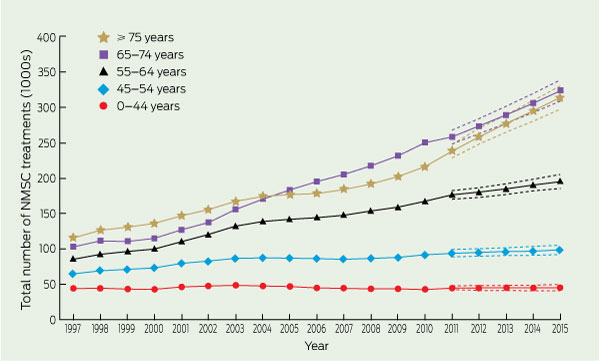 Dotted lines represent the 95% confidence intervals around each of the predictions. 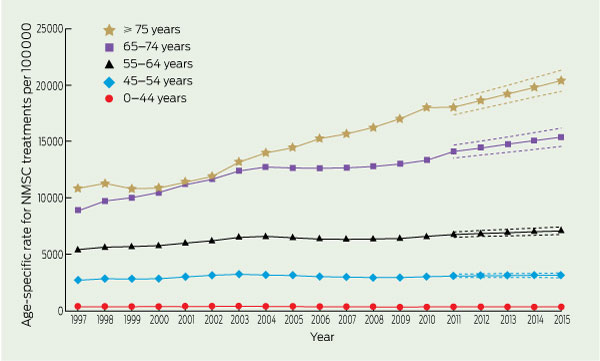 Dotted lines represent the 95% confidence intervals around each of the predictions.

We thank Sean McGuigan, Biostatistician, Epworth HealthCare for critical review of the manuscript. N S thanks the Cancer Council of Victoria for scholarship support. R D S acknowledges salary support from the Skin and Cancer Foundation of Victoria.