The tobacco industry and Aboriginal and Torres Strait Islander people

A systematic search at the source of the smoking problem

While there has been a redoubling of efforts to reduce smoking rates among Indigenous Australians, Indigenous health researchers have paid almost no attention to the tobacco industry — the “vector” of smoking-related diseases. The exceptions are two reports of the use of Aboriginal images to advertise Winfield cigarettes in Europe.1,2 We decided to examine industry documents to look for the inside story of the tobacco industry’s approach to the Indigenous Australian market.

Methods, sources and their limitations

The online Legacy Tobacco Documents Library (LTDL) has more than 70 million pages of tobacco industry documents, of which 98% are full-text and searchable.3 Most of these records relate to the 1998 Master Settlement Agreement (MSA), which continues to require transnational tobacco companies operating in the United States to make publicly available all industry documents disclosed during the pre-trial “discovery” phase of past and future lawsuits. The LTDL does not include all Australian industry documents, but can still be used to investigate the attention paid to Australia by transnational tobacco companies.4,5 The completeness of the collection is further compromised by the industry’s destruction of many documents;4 nevertheless, some consistent themes emerge.

We searched the LTDL for tobacco industry references to Aboriginal and Torres Strait Islander people, guided by standard procedures.6 Initial keyword search terms were “Australia” or “Australian” combined with “Indigenous”, “Aboriginal”, “Aborigine” or “Torres Strait Islander”. Further search terms were from items discussed in the two previously published articles1,2 or from items in the documents retrieved in the primary search. These included “Kata Tjuta”, “Get your own black” and combinations of: “Winfield”, “peace pipe” and “Think Downunder”; “Olgas” and “Australia”; and “Senate”, “Australia” and “Aboriginal”. The document searching was conducted between December 2010 and September 2011. A total of 2295 documents were reviewed. We also investigated newspaper and parliamentary reports referred to in the industry documents. We reviewed all documents to assess whether they included evidence about the industry’s approach to the Indigenous market. Most did not. Those that did were analysed for emergent themes.

Transnational tobacco companies routinely monitor Australian media, parliamentary and scientific reports, including those related to Aboriginal and Torres Strait Islander people.5 They contract monitoring services to summarise these reports, and the summaries are circulated internally, along with copies or extracts of the original reports. Industry documents have included reports of high smoking prevalence among Aboriginal people and historical and ethnographic reports of smoking and use of tobacco by Aboriginal people, especially the use of pituri and native tobaccos. Almost all of these documents include no comment from the tobacco industry on the original report; however, some of the original media reports do include comments from industry spokespeople.

In 1984, the Sydney Morning Herald reported that the National Aboriginal Conference (NAC), an elected Aboriginal organisation, had brought a claim against WD & HO Wills that an advertisement for John Player Special cigarettes was racist. The advertisement included the text “Get your own black” (Box), an allusion to owning black servants, although ostensibly referring to the black branding.7,8 The tobacco company was forced to withdraw the offensive advertisement — a resounding victory for the NAC on behalf of Aboriginal people.

In 1998, the same newspaper described the use of several Australian icons, including Aboriginal imagery, to promote Winfield cigarettes in Europe.1,9 One billboard showed an Aboriginal man playing a didgeridoo and included, in German, the slogan “Australians’ answer to the peace pipe”. The company’s spokesperson said the advertisements were justified, as Winfield was itself an iconic Australian brand. She did not comment on the Aboriginal images, but Aboriginal spokespeople from the National Aboriginal Community Controlled Health Organisation and the Australian Medical Association called them demeaning misrepresentations.

Te Reo Marama, a Maori tobacco-control organisation in New Zealand, has also complained about the use of Indigenous imagery to market cigarettes, and has celebrated the more recent withdrawal of brands in response to its complaints.10

The Australian Government Senate Community Affairs References Committee held an inquiry into “The Tobacco Industry and the Costs of Tobacco-related Illness” in 1994–1995.11 The internal memos and public statements by the industry that were related to this inquiry contain the most detailed evidence available of the industry’s approach to Aboriginal and Torres Strait Islander people. The report’s final chapter included a section about smoking among Indigenous people and three recommendations (out of 39) that called for more attention and funding for tobacco control in Indigenous communities.

The industry seemed little concerned with this focus on Indigenous tobacco control. Companies did not mention Indigenous people in their briefings before and after hearings, or in their press releases that attacked the report.12-14 Philip Morris’s detailed response to the report did not oppose the recommendations regarding Indigenous people.15 It is not clear why the industry chose not to oppose targeted campaigns to reduce smoking among Indigenous people. Was it just strategic spin, to appear reasonable on many issues and just oppose those that would have the greatest impact on profits (those reducing consumption in the entire population)? Was it because the industry believed, as does Chapman,16 that targeted campaigns lead to inefficiencies and fragmentation of limited budgets? Tobacco-control programs targeting Indigenous people were just a vague promise in 1995, but now more than $100 million has been allocated to Indigenous anti-tobacco measures.17 Yet we have seen no industry response to this large new investment.

The Senate inquiry also pointed to possible targeting of Aboriginal people by the tobacco industry. The Northern Territory Department of Health and Community Services’ submission described a Philip Morris promotion that provided a T-shirt with the purchase of two packs of Marlboro cigarettes in Aboriginal communities.11 In some cases, the name of the community was included on the T-shirt in the Marlboro colours and design, but the company insisted this was only with the agreement of the local community. Philip Morris responded that the “promotion was similar to other promotions throughout the country” and denied any “unscrupulous targeting”. This can possibly be believed, as a later internal industry briefing emphasised protecting these types of promotions used in all settings, which the Committee had recommended be banned, more than defending itself against claims of targeting a vulnerable population.11,18

There is no evidence in the industry documents to suggest there was a separate tobacco industry campaign targeting Aboriginal and Torres Strait Islander communities and smokers. The same approach appears to have been used as elsewhere in Australia, perhaps with some nuances that were not identified because of the limitations of these transnational industry documents. In contrast, in the larger American market the industry did mount campaigns targeting the large African-American community.19 The industry may perceive the Indigenous section of the Australian market as too small (< 2% of the population aged 15+)20 to warrant targeting.

These industry stories can be used in discussions about smoking with Aboriginal and Torres Strait Islander people. They can shift discussion from “blaming the victim” to starting to understand the industry that profits from this product that causes so much illness, death and misery — an industry represented by such statements as the notorious comment attributed to an RJ Reynolds Tobacco Company executive: “We don’t smoke the shit, we just sell it. We reserve the right to smoke for the young, the poor, the black and the stupid”.21 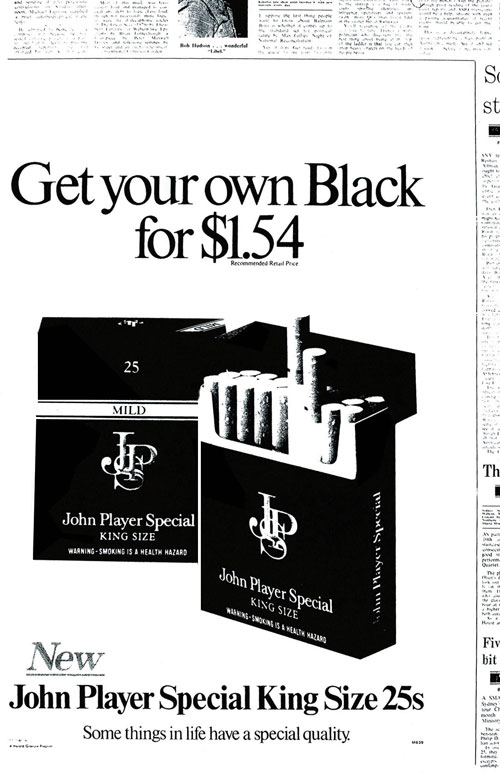 The offensive advertisement for John Player Special Cigarettes, which was withdrawn after successful action by the National Aboriginal Conference (NAC) in 1984.