Prothrombinex-VF use in warfarin reversal and other indications

Objective: To assess the use of Prothrombinex-VF powder for injection (PTX-VF) at Royal Perth Hospital and analyse the efficacy and safety profile of PTX-VF.

Design, setting and patients: A prospective observational audit of PTX-VF use, conducted by reviewing medical records and laboratory and imaging results for all patients prescribed PTX-VF from 1 November 2009 to 1 May 2010.

Results: 334 vials of PTX-VF were administered to 84 patients over 107 prescriptions. Indications were warfarin reversal, intraoperative bleeding and coagulopathy (66, 20 and 21 prescriptions, respectively). PTX-VF with FFP was compared with PTX-VF alone for warfarin reversal and there was a significant decrease in international normalised ratio (INR) that was independent of group (P < 0.001). Lower doses of PTX-VF (< 25 IU/kg) were compared with higher doses (25–50 IU/kg) for warfarin reversal and decrease in INR was significant, independent of group (P = 0.002). PTX-VF was administered for intraoperative bleeding in 18 patients who had not been treated with warfarin. No hypersensitivity reactions, thrombotic complications or worsening of disseminated intravascular coagulation occurred during 7-day follow-up.

Conclusion: For warfarin reversal, lower doses of PTX-VF (< 25 IU/kg) and PTX-VF without FFP were effective. PTX-VF was also used in intraoperative bleeding and non-warfarin coagulopathy. No adverse events were associated with PTX-VF.

Royal Perth Hospital (RPH) is Western Australia’s largest hospital; it has 855 inpatient beds and its medical and surgical specialties include major trauma, burns, heart and lung transplantation, bone marrow allografting and interventional neuroradiology. PTX-VF is stored in the Transfusion Medicine Unit of the Haematology Department and dispensed after request from medical officers.

All patients prescribed PTX-VF at RPH from 1 November 2009 to 1 May 2010 were identified from the ULTRA (GE Medical Systems, Milwaukee, Wis, USA) computer database. A prescription was defined as administration of PTX-VF with blood tests measuring coagulation profile before and after. To enable observation of raw patterns of use, medical officers at RPH were not aware of the audit. Permission for the audit was given by the RPH Human Research Ethics Committee.

We collected data on: patient demographics (age, sex), medical history (weight, indication for PTX-VF, diagnosis and past medical history) and drug history (warfarin, aspirin and/or clopidogrel within 5 days of PTX-VF administration); prescription details (dose of PTX-VF, FFP, vitamin K and other haemostatic agents); results of laboratory investigations (INR, activated partial thromboplastin time [APTT], fibrinogen level and platelet counts before and after PTX-VF administration); and adverse effects (hypersensitivity reactions, thrombosis and disseminated intravascular coagulation). Patients were followed up for 7 days after administration of PTX-VF, or until death if this occurred sooner, by review of medical records and results of laboratory and imaging tests.

Patients with multiple PTX-VF prescriptions could not be compared with those who had a single prescription (because of insufficient patient numbers), so a standard error adjustment for the correlation within the clusters of observations for patients with multiple prescriptions was included in all analyses. For continuous outcomes, bootstrapped linear regression was used; for dichotomous measures of vitamin K and FFP (administered or not), logistic regression was used. Regression models were used to test bivariate relationships to facilitate the standard error adjustment necessary for the clustered observations. Where possible, transformations to geometric mean were applied to produce normally distributed outcomes. Geometric means of PTX-VF doses were obtained by taking the antilog of the mean of the log transformed PTX-VF dose. For the change in INR over time, random-effects regression was performed on the inverse of the INR value, which was normally distributed. Mean INR values are back-transformed means of inverse INR values.

During the 6-month audit period, 334 vials of PTX-VF were prescribed to 84 patients. Sixty-nine patients had a single prescription, 12 patients had two prescriptions, and the three remaining patients had three, four and seven prescriptions respectively, thus totalling 107 prescriptions. Every vial of PTX-VF used during the audit period was accounted for. No patient had a documented history of coagulation factor deficiency. The mean time between PTX-VF administration and INR measurement after treatment was 4.5 hours.

Indications for PTX-VF fell into three groups: warfarin reversal, intraoperative bleeding, and coagulopathy (prolonged INR [greater than 1.5] not due to warfarin). Some patients had overlapping indications and multiple medical teams involved in their care, therefore the predominant indication was used for our analyses (Box 1). The numbers of vials prescribed by specialty and indication are shown in Box 2.

PTX-VF was prescribed 66 times for warfarin reversal because of imminent surgery (33 prescriptions) or clinically significant bleeding (33 prescriptions). The INR decreased to 1.5 or less in 40 of 66 prescriptions in this group, but remained prolonged in the other 26 prescriptions. In 16 of 33 bleeding patients, haemostasis was achieved with PTX-VF and other blood products. Some patients had other factors contributing to bleeding that were also treated, including thrombocytopenia (seven patients), concurrent antiplatelet therapy (nine patients), and prolonged APTT (23 patients).

PTX-VF with and without FFP

Seventy-two vials of PTX-VF were given for intraoperative bleeding over 20 prescriptions (Box 1), mainly during cardiothoracic surgery (Box 2) — most commonly during heart valve replacements and heart transplantation. No patients in this group had been treated with warfarin. The mean PTX-VF dose in this group was 23.0 IU/kg (95% CI, 18.6 to 28.4 IU/kg), and mean INR was unchanged over time (less than 1.5 before and after treatment). Haemostatic agents given concurrently included platelets (15 of 20 prescriptions), FFP (12), protamine (seven), tranexamic acid (six), vitamin K (one) and factor VIIa (one). PTX-VF was prescribed as first-line therapy for intraoperative bleeding for seven prescriptions, as second-line therapy for five prescriptions, and third-line for the remaining prescriptions. Haemostasis was achieved in all cases. Factors contributing to intraoperative bleeding included thrombocytopenia (six cases) and prolonged APTT (seven cases).

Twenty-one prescriptions of PTX-VF were for coagulopathy that was not due to warfarin but was secondary to liver synthetic dysfunction, shock or multiorgan failure — 13 prescriptions for active bleeding and eight for impending procedures. The mean PTX-VF dose was 16.8 IU/kg (95% CI, 12.9 to 21.9 IU/kg) and other haemostatic agents given are shown in Box 1. The mean INR decreased from 2.2 (95% CI, 1.9 to 2.6) to 1.7 (95% CI, 1.4 to 1.9) overall. Haemostasis was achieved with haemostatic agents in 9 of the 13 patients with active bleeding; the others required surgical intervention. Those with an impending procedure were given PTX-VF before the procedure, which reduced INR in all cases.

No hypersensitivity reactions or venous thromboses occurred after PTX-VF was given. Disseminated intravascular coagulation (DIC) is a contraindication to PTX-VF and 16 prescriptions were for patients who had two or more features suggestive of DIC (hypofibrinogenaemia, thrombocytopenia, elevated INR and clinical history of haemorrhage or acute illness), although D-dimer testing was not performed, so this group might be overinclusive. There was no indication that DIC worsened after PTX-VF was given because the INR decreased and fibrinogen level increased in every case, and the five patients who died were already critically unwell (due to septic shock or physical assault).

Interactions with tranexamic acid have been reported, and six patients were given tranexamic acid with PTX-VF (20.0–41.7 IU/kg) during cardiothoracic surgery for haemostasis; five had no complications and the other died from an unrelated cause. Monitoring of factor IX levels was not performed. Fourteen patients died within 7 days of PTX-VF therapy, but these deaths were unrelated to PTX-VF (six patients had organ failure, four had sepsis, three had malignancy and one had multiple trauma).

During the 6-month audit period, 334 vials of PTX-VF were used at RPH, which is consistent with average usage; they were used for warfarin reversal and to treat intraoperative bleeding and coagulopathy. No adverse effects from PTX-VF were identified in our audit.

Warfarin is commonly used for treatment of atrial fibrillation and thromboembolic disease and for stroke prevention, and the number of patients prescribed warfarin in Australia is expected to increase due to the ageing population.6 Safe warfarin reversal is therefore important to permit surgery and treat major bleeding (major bleeding affects about 6.5% of patients anticoagulated with warfarin annually, and about 1% of such bleeds are fatal).7

We found that PTX-VF is effective for warfarin reversal without FFP, which is consistent with results of previous studies.3,5-7 FFP and some four-factor PCCs1,2,8 contain large amounts of factor VII, while PTX-VF and other three-factor PCCs contain little to no factor VII. We therefore believe that factor VII is not important for warfarin reversal, as this can be achieved with PTX-VF and other three-factor PCCs.4-6,9 Recent guidelines from the British Committee for Standards in Haematology recommend that FFP should only be used for major bleeding when PCCs are not available.3 Advantages of PTX-VF (and other PCCs) over FFP include immediate onset of action, easier storage, easier reconstitution without time needed to thaw, less risk of disease transmission, and no risk of transfusion-related lung injury, fluid overload or blood group incompatibility.4-7,9 Also, reintroduction of warfarin after surgery to return to a stable anticoagulated state has been successfully shown in patients given PTX-VF.9

Lower doses of PTX-VF (< 25 IU/kg) are effective for warfarin reversal. We found significant INR reduction independent of lower-dose or higher-dose group with similar doses of vitamin K and FFP. Ex-vivo testing of reduction of INR values greater than 4 with one dose (500 IU) of PCC has been found to normalise INR.2 However, we cannot recommend that this finding be extrapolated to patients who have an INR value greater than 4 because there were few such patients in our study — most had a pretreatment INR between 2.0 and 3.0.

Adherence to guidelines4 was poor in our audit. There were large variations in dose (in IU/kg) and PTX-VF usage in bleeding patients who had normal coagulation profiles before administration of PTX-VF and other blood products. Despite divergence from the warfarin reversal consensus guidelines, the INR reduction to 1.5 or less in most (40 of 66) prescriptions and cessation of bleeding in most cases supports lowering the recommended PTX-VF dose in future revisions of guidelines. When INR did not reduce to 1.5 or less, haemodynamic instability or sepsis was present in most cases.

When PTX-VF was used to treat coagulopathy in non-warfarinised patients, it was effective at decreasing INR and resulted in haemostasis in nine of 13 bleeding patients. However, major studies of PTX-VF use in such patients (for whom its use is not licensed) are lacking.

Our audit showed that lower doses of PTX-VF (< 25 IU/kg) and PTX-VF without FFP are effective for warfarin reversal. Administering PTX-VF in this manner can simplify warfarin reversal and lead to cost savings and potentially fewer complications. Improved prescribing practices, such as consistency with dosing and measurement of factor IX levels before and after dose, are desirable, and these principles can be applied to other PCCs. 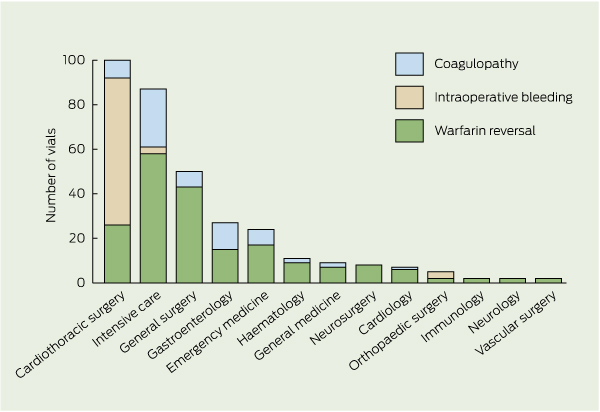 3 Prescriptions of PTX-VF, with and without fresh frozen plasma, for warfarin reversal

We thank Sally Burrows (Biostatistician, School of Medicine and Pharmacology, University of Western Australia and RPH) for performing the data analysis.