Melioidosis at Royal Darwin Hospital in the big 2009–2010 wet season: comparison with the preceding 20 years

Objective: To compare the unprecedented 91 cases of melioidosis in the Top End of the Northern Territory of Australia from 1 October 2009 to 30 September 2010 with the 540 cases in the preceding 20 years and postulate reasons for this year of very high melioidosis incidence.

Conclusions: In 2009–2010, the Top End had the highest annual incidence of melioidosis documented from anywhere to date. The prominent increase in cases in Darwin was associated with above average rainfall in Darwin during December 2009 to February 2010. The increase in the proportion of Indigenous Australians who acquired melioidosis in Darwin may reflect movement of some Indigenous people into Darwin from remote communities.

Melioidosis is an infection caused by the soil and water bacterium Burkholderia pseudomallei, and was first documented in Australia in 1949 in Winton, Queensland, where sheep were infected.1 It was first reported in the Northern Territory in 1960.2 Since then, melioidosis has been increasingly recognised as an important cause of sepsis in northern Australia,3-6 with the vast majority of cases occurring during the monsoonal rainy season during October to April.

The Darwin Prospective Melioidosis Study commenced on 1 October 1989.7 Over the 20 years until 30 September 2009, 540 culture-confirmed cases of melioidosis were documented from the Top End of the NT.6 This represented a median of 27 (range, 6–48) cases per year. From 1 October 2009 until 30 September 2010, an unprecedented 91 patients with culture-confirmed cases of melioidosis were managed by Royal Darwin Hospital (RDH). In this study, we compare these 91 cases from that most recent 12-month period with the 540 cases from the preceding 20 years.

The Top End of the NT has an estimated population of 177 500 people, with 124 500 living in Darwin.8 Indigenous Australians account for 26% of the Top End population, and this proportion includes most of the people living in remote communities. All patients in the Top End with culture-confirmed melioidosis are managed by, or in consultation with, the infectious diseases department at RDH.

The Darwin Prospective Melioidosis Study records clinical and laboratory data for all patients with melioidosis, and defines risk factors and septic shock as has been described previously.6,7 We follow all patients until death or completion of treatment.

For the purposes of the study, the Darwin urban region includes the city limits of Darwin and Palmerston; and the Darwin rural region extends from outside Palmerston to include the rural blocks accessed along the Stuart and Arnhem highways as far as Adelaide River, 115 km south of Darwin.

Patient details were analysed using Stata, version 10 (StataCorp, College Station, Tex, USA). Cases of melioidosis from 1 October 2009 until 30 September 2010 (12 months) were compared with cases from 1 October 1989 until 30 September 2009 (20 years). The χ2 test was used to compare intergroup differences in categorical demographic and clinical parameters, with P < 0.05 considered significant. Odds ratios and 95% CIs were then calculated. We calculated population-based incidence rates for melioidosis in the Top End for 2009–2010 using the 2009 estimated population.8

This study was approved by the Human Research Ethics Committee of the NT Department of Health and Menzies School of Health Research (approval no. 02/38).

Box 6 shows the monthly Top End cases of melioidosis for 2009–2010 in comparison to rainfall recorded at Darwin airport. In the Darwin urban area, there was substantially above average rainfall in December 2009 and January 2010.10 Total Darwin rainfall for the period 1 October 2009 to 30 September 2010 was 2122.4 mm, compared with the mean yearly rainfall of 1712.7 mm.

The year beginning with the wet season of 2009–2010 had the highest recorded number of cases of melioidosis in the Top End for the past 21 years. Over these 12 months, our estimated population-based annual incidence of 50.2 cases per 100 000 is the highest recorded anywhere in the melioidosis-endemic region of South-East Asia and northern Australia. The previous highest annual incidence in the Top End was 41.7 cases per 100 000 population in the calendar year of 1998, which included case clusters following Tropical Cyclone Les, which flooded the town of Katherine, and Tropical Cyclone Thelma, which passed over the north-west end of the Tiwi Islands.9 The prior highest recorded annual incidence anywhere else was 42.7 per 100 000 in the Torres Strait Islands during 1995–2000.11

The association between melioidosis and rainfall and severe weather events is well recognised in Australia3,5,6 and South-East Asia.12,13 The 2009–2010 rainfall pattern is considered the major contributor to the increase in cases. There was consistently heavy rainfall in the Darwin area in December 2009 and January 2010, with two severe weather events leading to intense rainfall in December and February. Other Top End locations had variable rainfall patterns which were generally less intense than in Darwin.

In 2009–2010, the incidence of melioidosis of 102.4 cases per 100 000 for Indigenous Australians was three times higher than that for non-Indigenous Australians. Even though the overall proportion of Indigenous cases remained the same, there was a significant reversal of the previous predominance of infected Indigenous patients being from remote communities to most being from urban Darwin in 2009–2010. The proportion of urban Darwin cases that was Indigenous increased from 38% to 53%. That four out of five of the Indigenous people from Darwin who died from melioidosis in 2009–2010 were homeless, previously from remote communities and with excessive alcohol intake as their major risk factor, supports concerns that the Northern Territory Emergency Response initiated in 2007 may have had possible unintended consequences resulting from displacement of drinkers from remote communities to urban centres such as Darwin, where alcohol is available.14-16

In conclusion, the dramatic increase in the number of cases of melioidosis in the Top End in 2009–2010 represented an estimated population-based annual incidence that is the highest on record. One in every 1000 Indigenous people living in the Top End had culture-confirmed melioidosis over that 12-month period. The increase in cases was most prominent in the Darwin urban area, and was associated with increased rainfall. There was also an increased proportion of Indigenous Australians who acquired melioidosis in Darwin compared with the preceding 20 years, which may reflect movement of some Indigenous people into Darwin from remote communities. 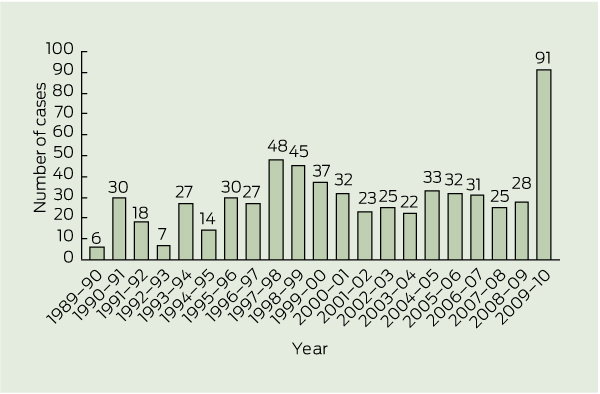 5 Clinical presentations of melioidosis during 2009–2010 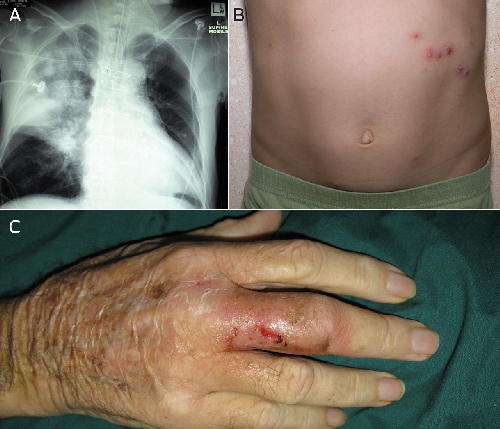 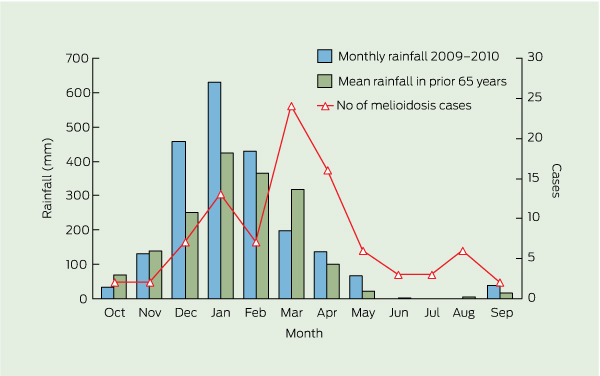 We thank our colleagues in the RDH infectious diseases and microbiology departments and intensive care unit, and from the NT Centre for Disease Control, for their expertise and assistance with diagnosing and managing the patients with melioidosis. This study is supported by grants from the Australian National Health and Medical Research Council (Project Grant 605820) and the United States National Institutes of Health (UO1 A1075568-01).