We report the first human case of babesiosis in Australia, thought to be locally acquired

A 56-year-old man with serious hepatic, renal and bony injuries was transferred to Canberra Hospital in mid November 2010 following a motor vehicle accident. His medical history included type 1 diabetes mellitus, excessive alcohol and prescription medicine use, depression, hypertension and hypercholesterolaemia. He had no history of injecting drug use. He had been living on the south coast of New South Wales with his son.

During the first 4 months of his admission he required surgery, prolonged broad-spectrum antibiotic therapy and total parenteral nutrition. He developed worsening cholestatic liver function, moderate-to-severe thrombocytopenia and fluctuating anaemia. By late March 2011, he was pancytopenic with worsening anaemia due to intravascular haemolysis, lymphopenia and severe thrombocytopenia, and required ongoing blood product transfusions. The result of an HIV test was negative.

In early April, the patient was transferred to the intensive care unit because of respiratory and haemodynamic deterioration. On 10 April, intraerythrocytic parasites were incidentally identified during routine examination of blood films taken that morning. Ring-form parasites, initially thought to be a Plasmodium species, were confirmed on thick and thin films. Results of immunochromatographic tests were negative for Plasmodium falciparum; however, intravenous artesunate and primaquine therapy for presumed severe malaria was commenced. Broad-spectrum antibiotic therapy was continued. After 48 hours without clinical improvement, the parasitaemia level had increased from 1.7% to 2.6% infected red blood cells. Re-examination of the blood films and recognition that the organisms did not produce hemozoin led to the presumptive diagnosis of babesiosis infection. This was confirmed by Australian and overseas experts who viewed electronic files of the slides. The patient was then given intravenous quinine (600 mg 8-hourly) and clindamycin (600 mg 6-hourly) for babesiosis. Azithromycin and tigecycline were also added to provide additonal broad-spectrum antimicrobial cover, but clinical deterioration continued, and the levels of parasitaemia, anaemia and thrombocytopenia did not improve. He developed multiorgan failure and required haemodialysis. The parasitaemia peaked at 5.1% infected red blood cells despite ongoing blood transfusions (including 18 units of packed red cells over 8 days). As his condition was too unstable for him to undergo total red cell exchange, an exchange of 500 mL of blood was performed on 16 April. He did not recover from the multiorgan failure, and severe thrombocytopenia contributed to acute gastrointestinal bleeding. On 18 April — 5 days after commencing specific antibabesiosis therapy — he suffered a fatal asystolic arrest.

Following the patient’s death, a retrospective study of the blood films taken during his hospital admission was undertaken. Ring-form parasites were detected in very low numbers back to the end of the first week of March 2011, coinciding with the development of severe thrombocytopenia.

Initially, the multiple blood products that the patient received during his admission were thought to be the likely cause of his babesiosis. But blood films stored by his local pathology service and taken between September and November 2010 (ie, before his hospital admission) revealed pre-existence of the intraerythrocytic parasite and hyposplenic features. As the patient had not received blood products before his hospital admission in November 2010, the parasitaemia could not have been transfusion related. He had reported being bitten by ticks, but had been too sick to qualify this further. Due to general ill health, he had not worked or left the local area for many years. His only overseas travel had been to New Zealand almost 40 years earlier, a country with no known human babesiosis. It thus seemed unlikely that the babesiosis was acquired from overseas.

To identify the organism and further elucidate its source, blood samples and films from the patient were examined at the Centers for Disease Control and Prevention (CDC) in Atlanta, United States, and at the School of Veterinary and Biomedical Sciences, Murdoch University, Western Australia. Both laboratories agreed that the morphological characteristics of the parasites in the blood films were consistent with a small Babesia. Intraerythrocytic organisms were mostly single and measured 1.5–2.5 m in size but were highly polymorphic; pyriform and ovoid forms predominated, bizarre amoeboid forms were also common, and an occasional tetrad (Maltese cross form) was noted (Box 1). Immunofluorescent antibody testing for Babesia microti was performed by the CDC on serum samples from the patient (positive result, with titre of 1 : 256) and his son (negative result).

Complete sequencing of the 18S ribosomal RNA gene (18S rDNA) and partial sequencing of the β-tubulin gene (both amplified by polymerase chain reaction) confirmed that the organism in the patient’s blood was B. microti. At the CDC, a nested PCR that specifically amplifies a 154-base-pair fragment from the B. microti 18S rDNA was initially used to confirm the presence of B. microti in the patient’s blood. In addition, sequencing of a 1767-base-pair fragment amplified with primers Crypto FL (5'-AACCTGGTTGATCCTGCCAGTAGTCAT-3') and Crypto RN (5'-GAATGATCCTTCCGCAGGTTCACCTAC-3'), was performed to strengthen the PCR findings.1 The 18S rDNA sequence obtained was 100% similar to the GenBank entry AY693840 obtained from a B. microti isolate 18S rDNA gene. At Murdoch University, two nested sets of universal piroplasm 18S rDNA primers were used, one of which has been published.2 The patient’s son’s blood was used as a negative control. The consensus sequence was 100% homologous to known human-derived Babesia species isolates. In addition, five novel primer sets designed during this study were used to obtain a partial β-tubulin gene fragment (791 base pairs), which confirmed the presence of B. microti in the patient’s blood and showed 100% homology with North American isolates (eg, GenBank entries AB083377 and AY144722). A phylogenetic tree for this locus (produced using the maximum likelihood method) revealed clustering with isolates of B. microti obtained from the tick species Ixodes scapularis (formerly known as Ixodes dammini), humans and voles in North America.

To our knowledge, this is the first report of a human case of babesiosis in Australia, which we believe was locally acquired.

Since B. microti has never been detected in Australia before, its discovery as the cause of infection in this patient, who had no significant history of travel, raises intriguing questions about its natural hosts and epidemiology on this continent. Traditionally, B. microti is considered to have a Holarctic distribution, associated with a variety of small mammalian hosts (rodents, including voles, and shrews), and is transmitted by several Ixodes tick species present throughout the northern hemisphere, with humans becoming infected as accidental hosts. Recent phylogenetic analyses based on complete sequences of the genes encoding 18S ribosomal RNA, β-tubulin and the η subunit of the chaperonin-containing t-complex polypeptide 1 suggest that B. microti represents a genetically diverse species complex that comprises several geographically distinct clusters located in North America, Eurasia and Japan, and is closely related to “Babesia microti-like” species isolated from an ever-expanding range of feral and domesticated mammal hosts.9

In Australia, babesiosis is a well documented disease of cattle (Babesia bigemina and Babesia bovis) and dogs (Babesia canis, Babesia vogeli and Babesia gibsoni), and babesiosis tick vectors have been imported to the continent since European settlement.10,11 Australia also has a diverse variety of native Ixodes ticks, including Ixodes holocyclus (responsible for tick paralysis), and a few Babesia and Theileria species have been described morphologically in native marsupial hosts (but not B. microti).12 Unfortunately, a paucity of molecular studies means that the taxonomy and phylogenetic relationships of the endemic piroplasms (intraerythrocytic tick parasites, including Babesia and Theileria) are not well understood.

Based on phylogenetic analysis, the isolate from this patient was most closely related to North American strains of B. microti, so it is unlikely that the piroplasm described here originated from a native Australian mammal, but not impossible. In the absence of transfusion or injecting drug history, the patient must have become infected following a tick bite. Two scenarios seem probable. The patient might have been bitten by an imported tick (contained within clothing or luggage that had recently arrived from an endemic country), but no history suggested such contact. Alternatively, a local tick might have transmitted an autochthonous infection, presumably originating from one or more species of introduced rodent.

The natural history of this patient’s infection is notable. Babesia ring forms were detectable on routine blood films taken while he was an outpatient — 7 months before he died. At that time, he was asymptomatic and neither anaemic nor thrombocytopenic, but 6 months later the babesiosis became symptomatic and severe. The parasitaemia of 5.1% around the time of his death was likely to have been an underestimate of the true figure as it would have been diluted by the multiple blood products that he was receiving at the time. Asymptomatic parasitaemia is well described in babesiosis, both in the setting of primary infection and following treatment of symptomatic infection.4 It is unclear what transformed this patient’s chronic asymptomatic infection into a severe symptomatic infection that probably contributed to his death. He did have risk factors for severe babesiosis: hyposplenism, liver impairment and his age;4 however, these were present when the infection was asymptomatic months earlier. It is possible that his chronic hospitalisation, and general deconditioning from the long admission, resulted in significant immunosuppression.

Severe babesiosis from B. microti is a serious condition with a case fatality rate of 5%–10%.13 Indeed, this patient’s condition did not improve despite his receiving recommended therapy once the diagnosis of babesiosis was made. Even the artesunate that he received for suspected malaria (immediately before the diagnosis) has been shown to have activity against B. microti in animal models.14

Although the animal host for B. microti is yet to be identified in Australia, the proximity of ticks, other wildlife and human populations along Australia’s eastern seaboard means that further cases may be encountered. Clinicians working in Australia should therefore be aware of the signs and symptoms of babesiosis and how to diagnose it (Box 2). Further investigation into the piroplasms of native mammals, introduced rodents and their ticks is necessary to identify the source of this infection. As transfusion-related babesiosis is well recognised in other countries,15 this case may have future implications for the screening of blood products in Australia. 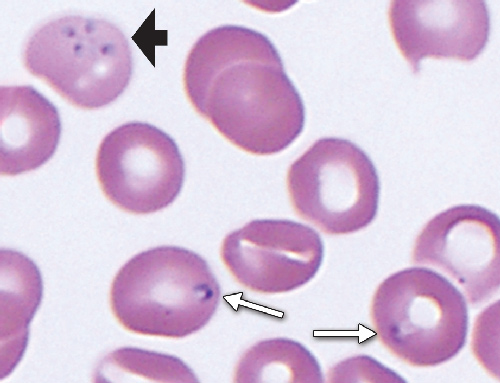 When to suspect babesiosis

Clinicians should suspect babesiosis in patients in Australia who have haemolytic anaemia, thrombocytopenia, fever, an influenza-like illness and a history of at least one of the following:

How to proceed with the diagnosis