Lessons from practice - Meningitis and pneumonitis caused by pet rodents

In 2011, a previously well 26-year-old office worker presented to a large Australian metropolitan hospital with a severe headache. Her illness had begun 3 days earlier with fever and a sore throat, after which she developed a severe, unrelenting occipital headache that was associated with nausea, vomiting, photophobia and neck stiffness. She had no respiratory symptoms such as cough or dyspnoea.

On Day 2, the patient continued to be febrile and two sets of blood cultures were performed. Further tests showed a raised C-reactive protein level (380 mg/L; RI, < 8.0 mg/L) and a mild coagulopathy (international normalised ratio, 1.4; RI, 0.8–1.2) with thrombocytopenia (platelet count, 123 × 109/L; RI, 150–400 × 109/L) suggesting early disseminated intravascular coagulation. That evening, the patient developed respiratory distress and hypoxaemia, with an arterial partial pressure of oxygen of 66 mmHg despite receiving a fraction of inspired oxygen (Fio2) of 80%. She was transferred to the intensive care unit, where she received non-invasive ventilation. A chest x-ray revealed bilateral patchy infiltrates consistent with a pneumonic process (Box 1). Antibiotic treatment with ceftriaxone and azithromycin was initiated.

On Day 3, growth was detected in the aerobic bottle from one set of blood cultures after 20 hours of incubation (BACTEC Plus, BD Diagnostics, Sparks, Md, USA), and antibiotic treatment was changed to piperacillin–tazobactam and ciprofloxacin. An initial Gram stain showed a thin gram-negative rod with no distinguishing features. After 24 hours of incubation, light growth of an organism was noted on blood and chocolate agars (Oxoid Australia, Thebarton, SA) which had been incubated anaerobically and in supplemental carbon dioxide. Gram stain of these colonies showed irregular, bulbous gram-negative organisms typical of Streptobacillus moniliformis (Box 2).

Antibiotic susceptibility was performed by Etest (bioMérieux, Marcy l’Etoile, France). The organism’s minimum inhibitory concentration to penicillin was 0.016 mg/L and to ceftriaxone was 0.008 mg/L. The organism was definitively identified by 16S rRNA sequencing. This showed a 100% base-pair match with S. moniliformis. The next closest match was a Leptotrichia species with a 94% base-pair match.

On Day 5, a blanching macular rash involving all limbs, including palms and soles, became apparent (Box 3). Histological examination of a biopsy sample of a macule from the patient’s hand showed a neutrophilic inflammation of the small dermal vessels consistent with leukocytoclastic vasculitis. By this time, the patient’s respiratory function had improved markedly and she was transferred to a medical ward.

Further history-taking revealed that the patient owned two pet rats. Although the animals had never bitten her, she had had close contact with her pets, including cuddling and kissing them.

On Day 9, lumbar puncture was repeated to ensure normalisation of pressures; the CSF opening pressure was normal (14 cmH2O), but the CSF showed a pleocytosis with two polymorpho- nucleocytes, 59 monocytes and 75 red cells. There was no growth of bacteria on standard cultures of CSF. Antibiotic therapy was changed to intravenous ceftriaxone (2 g twice daily) for a further 7 days to ensure treatment of possible meningitis.

Results of further investigations, including transthoracic echocardiogram, whole-body bone scan and CT pulmonary angiogram, were negative. The patient was discharged home after 17 days in hospital and made a full recovery with no relapse.

This case highlights the importance of history-taking and the need to perform blood cultures in patients presenting with fever. The differential diagnoses considered were wide and included bacterial sepsis, viral infection and autoimmune disease. Bacterial sepsis from streptococcal, meningococcal or staphylococcal infection was considered most likely in this patient. Definitive diagnosis was helped by the isolation of S. moniliformis from blood culture, which allowed targeted therapy and improved prognosis.

It is possible that our patient was co-infected with an arenavirus such as lymphocytic choriomeningitis virus (LCMV). Although LCMV is rare, it can be acquired by handling pet rodents or their excreta and can cause a flu-like illness with aseptic meningitis.1 Diagnosis of LCMV infection would require molecular testing of blood or CSF in a reference laboratory.

S. moniliformis, a causative agent of rat bite fever, is part of the commensal flora of the rat’s oropharynx.2 Another form of rat bite fever — known as “sodoku” — is caused by Spirillum minus, a spirochaete-like organism.2 Sodoku generally differs from S. moniliformis infection by causing induration at the site of the rodent bite and having an incubation period of more than 10 days. The incubation period for S. moniliformis infection is typically fewer than 7 days.2

Rat bite fever, as the name suggests, is usually acquired through a rat bite. However, the disease can result from handling and exposure to excreta or saliva of rodents such as rats or guinea pigs.2,3 S. moniliformis infection can also be caused by ingestion of contaminated milk; in such cases it is known as Haverhill fever, as the first known outbreak (in 1926) occurred in Haverhill, Massachusetts.2

Clinical manifestations of S. moniliformis infection include fever, headache, rash and polyarthritis. The rash typically involves the extremities, including the palms and soles, with a leukocytoclastic vasculitis seen on histology.4 The disease is often mild or self-limiting. However, infection is potentially lethal and can cause rapid death in previously healthy adults.2,5 The overall mortality rate is estimated to be 13%.2 Although less frequently reported than fever, headache, rash and polyarthritis, pneumonitis and endocarditis are common autopsy findings in those who succumb to the disease.5-7 Meningitis due to S. moniliformis is rare, but it has been described in Dutch and Portuguese literature.8,9

Classically, this organism has been described as slow and difficult to grow in the laboratory. This was not the experience in our laboratory as growth occurred within 24 hours, although enriched media and incubation with supplemental carbon dioxide was required. The initial Gram stain was not distinctive, but with subculture the bacteria became irregular and formed bulbar swellings, a feature highly suggestive of S. moniliformis.

The standard recommended therapy is penicillin, but S. moniliformis is susceptible to a number of other antibiotics including cephalosporins and macrolides. In cases where the organism has been isolated, in-vitro antibiotic susceptibility testing should be done for any antibiotic being considered for clinical use.2

Systemic illness following rat bite has been recognised for thousands of years. Historically, the disease was associated with squalor and slum-dwelling. However, victims in recent years have included laboratory workers, pet shop employees and, increasingly, owners of pet rats.2,4,5,10 As this case demonstrates, a bite is not necessary for infection — close contact with rodents may be sufficient. As rodents become more popular as household pets, more cases of S. moniliformis infection due to affectionate contact are likely to occur. 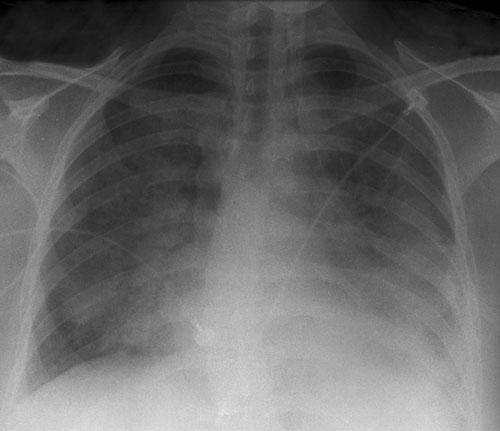 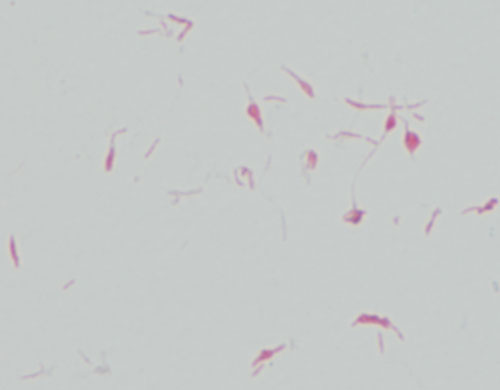 3 Characteristic rash on the patient’s palms 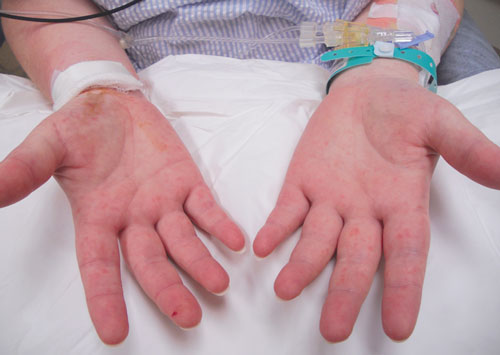