An 81-year-old non-English-speaking Filipino woman with type 2 diabetes mellitus presented with left knee pain and swelling of 18 months’ duration. Her mobility was restricted to less than 2 m because of pain. Synovial fluid obtained by needle aspiration during a recent visit to the Philippines had yielded a white cell count of 12 200 cells/μL (55% polymorphonucleocytes; reference interval [RI] not available) and no bacterial organisms. On her return to Australia, she was referred to an orthopaedic surgeon. Physical examination revealed chronically discharging wounds at previous aspiration sites of the medial and lateral aspects of the knee, which was swollen and tender but with good range of movement. The patient did not have a fever, and her C-reactive protein level was 18 mg/L (RI, < 10 mg/L)]. Magnetic resonance imaging demonstrated florid erosive synovitis, considered most consistent with rheumatoid or seronegative arthritis, although bone oedema was noted, suggesting osteomyelitis (Box 1). Culture of material from the sinuses for bacteria was negative.

Expert opinion on management of exposed laboratory staff3 indicated that the risk in this situation was low (colonies were immature and exposure minimal), but warranted prophylaxis. Laboratory staff exposed to the fungus were monitored for symptoms, prescribed 6 weeks of itraconazole 200 mg twice daily for prophylaxis,3 and had immunodiffusion serology performed (in-house) before and after prophylaxis. All returned negative results.

Subsequently, the patient’s travel history revealed a period of residence in Las Vegas, USA, prior to moving to the Philippines. Immediately after leaving the US, she had symptoms of a respiratory illness. The illness was followed by knee pain and swelling. Serology was not performed at any time.

Liposomal amphotericin 4 mg/kg daily was commenced and was replaced with oral itraconazole 200 mg twice daily when whole-body bone scanning and chest imaging revealed no other foci of infection. The second stage of the joint replacement (removal of spacer and insertion of a prosthetic joint) was undertaken 4 weeks later.

Imported pathogens are increasingly recognised as potential biosecurity concerns, but may be overlooked when the clinical syndrome and causative organism are unexpected. This case highlights the need to consider an infectious aetiology in an older migrant with a chronic inflammatory monoarthritis. It emphasises the need for good communication between laboratory disciplines, and demonstrates preliminary success with a combined surgical–medical–pathology–pharmacological approach.

Coccidioidomycosis (“pseudotuberculosis”) is an invasive fungal infection caused by Coccidioides species (C. immitis and C. posadasii). It is not autochthonously acquired in Australia, being endemic to western-hemisphere deserts, primarily in the south-west of the United States, and Mexico. After respiratory inoculation, arthroconidia (hyphal forms) transform into multinucleated spherules, which rupture, propagating new spherules.5 Crucial diagnostic information obtained through the histopathological detection of spherules in this patient (Box 2) was rapidly relayed to the microbiology laboratory.

Coccidioides spp are classified as Risk Group 3 pathogens in Australia (as is Bacillus anthracis).6 Analytical work performed on these pathogens must be carried out in a biological safety cabinet in a physical containment level 3 sealed laboratory with negative air pressure.6 As one of the ten most common laboratory-acquired infections,7 with laboratory attack rates exceeding those of natural exposure,8 travel history to an endemic area is crucial information for laboratory staff.3,9 Suspected C. immitis colonies take up to 5 days to manifest with “typical” morphological characteristics. Further, risk to laboratory staff may be longstanding if hardy arthroconidia disseminate. Extensive and costly cleaning measures are then required.

In our patient, it is highly likely that infection was acquired in the south-west US about 18 months earlier, accounting for her pneumonic illness, which occurs in 40% of infected immunocompetent patients.10 A thorough history including travel should be obtained; for non-English-speaking patients, this should be through a professional interpreter. The history of residence in the US might have raised suspicion of coccidioidomycosis sooner. Our patient’s ethnicity and age might have facilitated subsequent osteoarticular spread.10 Although less than 5% of infected patients develop dissemination, it is significantly more likely in Filipino people, possibly related to the HLA class II DRB1*1301 allele, or blood group.10 Diabetes mellitus is not a recognised risk factor for dissemination.

Common extrapulmonary sites of infection are bone, joint, skin and brain. The knee is the most common osteoarticular site of infection.8,10 Failure to grow the organism from initial knee aspirates may have been because of sequestered organisms in the synovium or bone, or the failure to request fungal cultures. Prolonged diagnostic delay led to advanced chronic arthritis. The presence of multiple discharging sinuses, relatively low C-reactive protein level and negative bacterial cultures in a native knee, combined with this patient’s ethnicity and age, should have raised suspicion of an atypical infective process (eg, mycobacterial, fungal). Differential diagnoses include non-infective erosive arthritides (rheumatoid, seronegative, gout). Preoperative diagnosis could have permitted earlier adjunctive antifungal therapy.

Aggressive debridement and removal of infected synovium is recommended for optimal outcomes.8 In this case, a modified two-stage replacement arthroplasty was undertaken. As incomplete surgical debridement was suspected, long-term suppressive antifungal therapy was continued.

Itraconazole was used because of its efficacy against C. immitis11 and its superiority over fluconazole in skeletal infection.8 As this case shows, the pharmacokinetics of itraconazole are complex, and therapeutic drug monitoring is recommended to optimise dosing.4,8,11 Toxicity requiring discontinuation is rare (4%); nausea or vomiting is the most common adverse event (10%), and hypokalaemia occurs in about 6% of patients.12 In our patient, toxicity developed after subtherapeutic steady-state trough levels prompted a dose increase. Variable absorption and the long half-life (20–30 hours) may also have contributed to dosing difficulties.

Fluconazole, voriconazole or posaconazole are second-line options.11 Amphotericin formulations are used for serious infections such as meningitis.11 Susceptibility testing is not routinely performed, to limit handling of the organism5 and because susceptibility is predictable.

We emphasise the importance of travel history to all clinicians, from the bedside to the laboratory, in this uncommon cause of inflammatory monoarthritis. Knowledge of prior residence in a coccidioidal-endemic area, if included on the specimen request form, would have mitigated laboratory exposure, although it may not have led to preoperative diagnosis. Multidisciplinary input contributed to a satisfactory early outcome. 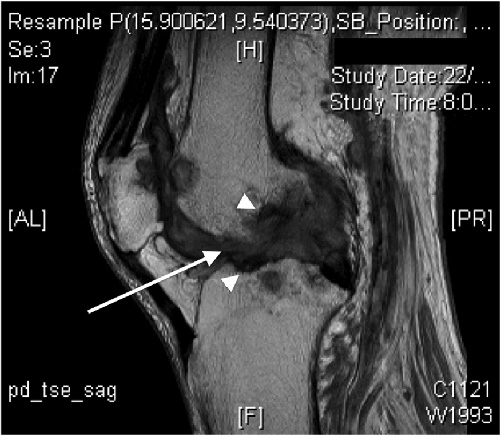