Hepatitis C virus (HCV) infection progresses to chronic HCV in around 75% of cases,1 with the resultant risk of progressive liver fibrosis, cirrhosis and hepatocellular carcinoma. Around 20%–30% of people with chronic HCV will develop cirrhosis, generally following at least 20–30 years of infection.2 The large pool of chronic HCV in Australia (220 000)3 and the “ageing cohort” effect of this population related to high incidence of injecting drug use-acquired infection in the 1980s and 1990s means that the already escalating rates of HCV-related cirrhosis, liver failure and hepatocellular carcinoma are projected to further increase over the next two decades.4

Fortunately, a revolution in HCV treatment is fast approaching, with the advent of direct-acting antiviral (DAA) therapy and the move towards interferon-free regimens.6 Before the end of this decade, simple (single daily dosing oral regimens), tolerable, short-duration (6–24 weeks) therapy with extremely high efficacy (cure rates above 90%) should be the norm for the HCV-infected population. The broad implementation of such therapeutic regimens has the potential to produce one of the major turnarounds in disease burden seen in public health and clinical medicine.

This review will cover major recent developments in DAA therapy for chronic HCV, present challenges that will be evident in the initial clinical use of HCV protease inhibitors, and provide an opinion on how the many DAA agents currently in development may be used in future therapeutic strategies.

As the HCV viral life cycle has been more fully elucidated (Box 1),7 rational drug design has been used to identify small molecule inhibitors of various HCV proteins involved in HCV replication: (i) NS3/4A protease, which is involved in post-translation processing of HCV polyproteins; (ii) NS5B RNA-dependant RNA polymerase that is required for copying the HCV RNA genome and transcribing mRNA; and (iii) NS5A enzyme, which like the two previous target enzymes is involved in HCV viral replication, although its functions are somewhat less clear.

Employing drug development strategies similar to those used for HIV antiretroviral therapy, many inhibitors of these three target enzymes are in Phase 2 and 3 clinical development, and two HCV protease inhibitors have been licensed (Box 2).

Over the past 12 months, several major milestones have been reached in the clinical development of DAA therapy for chronic HCV infection. Findings from Phase 3 trials in treatment-naive and treatment-experienced patient populations with genotype 1 (55% of the chronic HCV population in Australia8) have been published for two HCV protease inhibitors, telaprevir and boceprevir.9-13 In treatment-naive populations, telaprevir or boceprevir, when added to PEG-IFN/RBV (triple therapy), improve SVR (undetectable HCV RNA 24 weeks post-treatment) from 38%–44% to 66%–75%, and enable treatment duration to be shortened from 48 weeks to 24–28 weeks for around half of patients.9,11 In treatment-experienced populations, telaprevir and boceprevir both provided considerably enhanced SVR when combined with PEG-IFN/RBV (from 17%–21% to 64%–66%), although treatment response varied from around 30% for those patients with a prior “null response” (< 2 log decline in HCV RNA with PEG-IFN/RBV through Week 12), to around 55% for those with a prior “partial response” (> 2 log decline HCV RNA at Week 12, but no on-treatment undetectable HCV RNA), to 75%–85% for those with prior relapse (end-of-treatment undetectable HCV RNA with post-treatment viral rebound).10,12 Telaprevir and boceprevir were licensed by the United States Food and Drug Administration in May 2011. However, several concerns regarding these two agents remain, including:

Telaprevir and boceprevir also have more limited potency against non-1 HCV genotypes, with particularly poor activity against genotype 3,14,15 and have therefore only been licensed for genotype 1.

In Australia, telaprevir and boceprevir were registered by the Therapeutic Goods Administration in early 2012, and could potentially receive Pharmaceutical Benefits Advisory Committee (PBAC) listing in late 2012. Early access schemes through Janssen (telaprevir) and Merck Sharp and Dome (boceprevir) are providing preregistration access to patients with chronic HCV genotype 1 infection; however, numbers are limited and restricted to major clinics.

Assuming these two initial HCV protease inhibitors receive PBAC listing, appropriate selection of patients for PEG-IFN/RBV/telaprevir and PEG-IFN/RBV/boceprevir regimens will be crucial. In the HCV-treatment-naive population, many of the pretreatment factors that are predictive of PEG-IFN/RBV response remain predictive for response to protease inhibitor-containing triple therapy, in particular fibrosis stage.9,11 Host genetic polymorphisms in the IL28B region, recently associated with PEG-IFN/RBV response in chronic HCV genotype 1 infection,16-18 also remain predictive of triple therapy response19 albeit less so due to the overall higher response rates.

Factors that are specific to DAA therapy response should also be helpful in patient selection. HCV genotypes 1a and 1b are not associated with PEG-IFN/RBV treatment response, but in protease inhibitor-containing triple therapy, patients with genotype 1a have a higher rate of treatment failure, which is related to the lower genetic barrier to viral resistance compared with genotype 1b.20

Individualised treatment decision making is crucial, with informative discussion between patients and clinicians, taking into account social, family and clinical factors. The potential advantages and disadvantages of initial DAA-based therapy should be covered. However, it is expected that many patients with early liver disease (F0–1) and those with prior PEG-IFN/RBV null response will be recommended to wait for further developments in DAA therapeutic strategies.

Triple therapy with PEG-IFN/RBV/protease inhibitor (telaprevir or boceprevir) should be the standard of care for patients with chronic HCV genotype 1 infection for the next 2–3 years. However, the rapid clinical development of numerous DAA agents across several classes provides the opportunity for both improved triple therapy regimens and additional therapeutic strategies. HCV protease inhibitors with preliminary evidence of enhanced efficacy, minimal toxicity, and improved dosing schedules (daily dosing)21,22 are in Phase 3 evaluation in combination with PEG-IFN/RBV (TMC435, BI 201335).

IFN-free HCV therapy was initially evaluated in the INFORM-1 study undertaken in Australia and New Zealand, which demonstrated that mericitabine/danoprevir (nucleoside analogue/protease inhibitor) combination produced potent viral suppression with no viral breakthrough during 14 days of dual dosing.24 Following this proof of concept, a study explored the curative potential of IFN-free dual DAA therapy. In patients with chronic HCV genotype 1 and prior PEG-IFN/RBV null response, four of 11 treated with BMS-650032 (protease inhibitor) and BMS-790052 (NS5A inhibitor) for 24 weeks achieved an SVR.23 Of particular interest, both genotype 1b patients were cured compared with two of nine genotype 1a patients. A subsequent study involving Japanese chronic HCV genotype 1b-only patients treated with the same regimen provided a 100% SVR rate (all 10 patients).25

Important data have also been presented on IFN-free therapy for chronic HCV genotype 2 and 3a. A Phase 2 study undertaken in New Zealand evaluated the nucleotide analogue PSI-7977 in combination with RBV for 12 weeks, with a 100% SVR rate (all 10 patients).26 The high genetic barrier to resistance, cross-genotype activity, and preliminary evidence of limited toxicity, make PSI-7977 (now known as GS-7977) a very attractive agent for use with other DAA agents and/or RBV. Further patient cohorts are evaluating the GS-7977/RBV regimen for chronic HCV genotype 1. Phase 3 data will be required to confirm preliminary efficacy and, more importantly, to evaluate safety in larger study populations.

Several other interferon-free combination DAA regimens are under clinical evaluation.27 A combination of a nucleos(t)ide analogue with an NS5A inhibitor may be an ideal therapeutic strategy as both classes have cross-genotype activity and lack the CYP3A4 interactions seen with the HCV protease inhibitor class.

Although time lines for future HCV therapeutic strategies are not completely clear, initial Phase 3 studies of IFN-free therapy will commence in 2012. Thus, it is possible that the period of triple therapy with PEG-IFN/RBV and protease inhibitor therapy will be relatively short-lived, to be replaced by IFN-free therapy for the vast majority of patients with HCV (Box 3). Initial concerns with telaprevir- and boceprevir-containing triple therapy, as outlined above, will increase the overall complexity of HCV clinical management. However, the likely switch to IFN-free regimens with markedly reduced toxicity, shortened treatment durations, and simplified dosing and monitoring schedules should lead to a rapid decline in complexity (Box 3). Clearly, significant toxicity or suboptimal efficacy revealed in Phase 3 evaluation with various IFN-free regimens will delay this relatively optimistic time line. Broad availability within the Australian context will also be dependent on the PBAC approval process.

The initial phase of DAA-based therapy will provide enhanced efficacy, but challenges to their clinical utility will be evident. There are several priorities for the next 3–5 years as we move towards IFN-free simplified combination DAA regimens. Chronic HCV should continue to be treated primarily as a chronic liver disease with enhanced capacity for staging of fibrosis. Non-invasive methods of liver disease staging, in particular hepatic elastography (Fibroscan), will be central to this strategy. The recent development of portable Fibroscan technology should further improve access to disease staging in non-tertiary clinic settings. Those patients with at least moderate fibrosis (estimated 54 000)3 should be targeted for therapeutic intervention, given their significant risk of progression to advanced liver disease complications. Once the era of IFN-free combination DAA therapy arrives, the overall strategy should switch to treatment of HCV as predominantly an infectious disease involving therapeutic intervention for all stages of disease (including acute HCV). Patients with advanced liver disease will continue to require specific liver disease management, while the utility of IFN-free therapy in the setting of HCV-related liver failure (including potential hepatic function restorative capacity) remains unknown. A major increase in HCV treatment uptake will require expanded access through community-based and primary care practices, opiate pharmacotherapy clinics, and prisons. Furthermore, enhanced public HCV awareness and targeted screening campaigns will be required. The potential for HCV treatment as a prevention tool, a remote possibility in the IFN-based therapy era, may also become a feasible public health strategy. 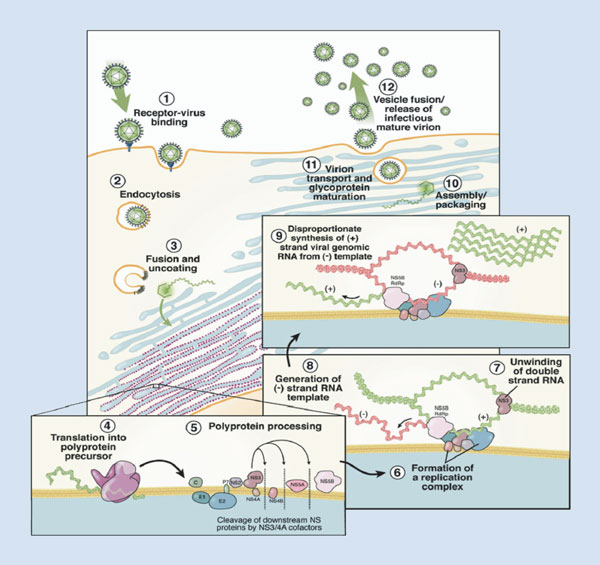 *Reprinted from Pawlotsky et al,7 with permission from Elsevier. 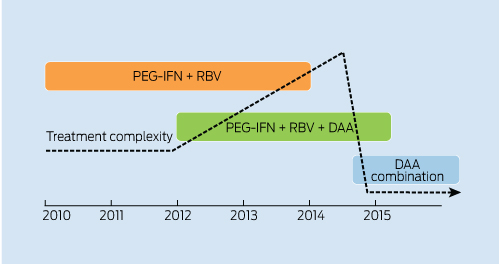 I am a member of the Roche, Bristol-Myers Squibb, Merck Sharp and Dohme, Gilead, and Janssen advisory boards, and have received payment for travel scholarships, speakers’ bureaus and research grants from these companies.