Objective: To determine the risk of stroke associated with non-steroidal anti-inflammatory drug (NSAID) use.

Results: The absolute risk of stroke was low: 7.1/1000 people/year. Incident use of NSAIDs was associated with a 1.88 times increased risk (95% CI, 1.70–2.08) of hospitalisation for stroke (ischaemic or haemorrhagic) following first ever dispensing of an NSAID. This equates to an increased absolute risk of 13.4 strokes/1000 people/year. Significant positive associations between starting an NSAID and having a hospitalisation for stroke were found for most NSAIDs, with adjusted sequence ratios ranging from 1.44 (95% CI, 1.16–1.80) for indomethacin to 1.80 (95% CI, 1.59–2.04) for rofecoxib.

Conclusions: Incident use of NSAIDs was associated with an increased risk of stroke. Increased awareness of the potential for serious adverse cardiovascular events, together with individual assessment of cardiovascular risk, careful deliberation of the balance between risk and benefits and appropriate supervision, is required when initiating NSAID therapy.

Cyclooxygenase (COX)-2-selective non-steroidal anti-inflammatory drugs (NSAIDs) were developed to reduce the risk of gastrointestinal toxicity, an adverse event commonly associated with “traditional” non-selective NSAIDs.1 However, randomised clinical trials reported an increased risk of cardiovascular events and death for the COX-2-selective NSAID rofecoxib, leading to its worldwide withdrawal from the market.1-3 The results have been confirmed in several large-scale observational studies.4 Subsequent meta-analyses of randomised clinical trials and observational studies have included several traditional NSAIDs, and these have also been associated with an increased risk of cardiovascular events,4-6 with risk varying across individual non-selective and COX-2-selective NSAIDs.7,8 Most of the studies to date have focused on a combined cardiovascular end point,4-6 and few have examined the association between NSAID use and risk of stroke.9-13

NSAIDs inhibit the synthesis of the COX-1-derived platelet thromboxane, a potent prothrombotic agent and vasoconstrictor, as well as inhibiting the synthesis by endothelial cells of prostacyclin, a potent, predominantly COX-2-derived antithrombotic agent and vasodilator.8 The balance of activities of these mediators is essential to maintain vascular homeostasis. Selective inhibition of COX-2 inhibits synthesis of prostacyclin, with little or no effect on thromboxane,14 leading to a prothrombotic state and the potential for increased cardiovascular events. Further, inhibition of COX-2 within the kidney can lead to sodium and water retention and elevation of blood pressure.15 A recent meta-analysis reported an increase in systolic blood pressure of about 3 mmHg with use of COX-2 inhibitors.15 Clinically, even a small increase in blood pressure can have implications for increased cardiovascular risk, with reports of 67% increased risk of stroke with a similar increase in blood pressure.16

We undertook an analysis of the Department of Veterans’ Affairs (DVA) administrative claims database to determine if the risk of stroke was evident in incident NSAID users in the Australian veteran population. Additionally, since the selectivity for COX-2 over COX-1 inhibition varies between individual NSAIDs across classes,17,18 we examined the risk of stroke by COX-2 selectivity.

Data were sourced from the DVA administrative claims database that contains details of all prescription medicines, and medical and allied health services and hospitalisations subsidised by the DVA for a treatment population of 300 000 veterans, war widows and widowers. Over 70% of the population are aged 70 years or older, 54% are men, and 9.8% live in residential aged care and within a year are dispensed an average of 11 unique medicines.19 Medicines are coded according to the World Health Organization (WHO) anatomical and therapeutic chemical (ATC) classification20 and the Schedule of Pharmaceutical Benefits item codes.21 Hospitalisations are coded according to the WHO International classification of diseases, 10th revision, Australian modification (ICD-10-AM).22

Prescription event sequence symmetry analysis examines asymmetry in the distribution of an incident event (eg, hospitalisation) before and after initiation of a specific treatment within a specified time period. Asymmetry may indicate an association of the specific medicine of interest with the event. The ratio of the number of people with the event after the prescription versus the number of people with the event before the prescription is described as the crude sequence ratio. The sequence ratio is robust towards confounders that are stable over time because of the within-person design, but is sensitive to prescribing or event trends over time. For example, if a medicine is prescribed with increasing incidence, a non-specific excess of patients with that medicine prescribed second would be expected.23 To adjust for such temporal trends, a null-effect sequence ratio is calculated, which estimates the sequence ratio one would expect in the absence of a causal association, given the incident medicine use and events in the background population. A description of the formula used for this calculation is provided elsewhere.23 An adjusted sequence ratio (ASR) is obtained by dividing the crude sequence ratio by the null-effect ratio and calculating 95% confidence intervals.23,24 The ASR can then be interpreted as the incident rate ratio of stroke in NSAID exposed versus non-exposed person-time.23 Prescription event sequence symmetry analyses were restricted to sequences of incident NSAIDs and stroke hospitalisations within 12 months of each other, to limit the effect of age and other potential time-varying covariates on the probability of exposure and outcome.

The database was searched for all incident prescriptions of NSAIDs (ATC, M01A) (Box 1) and incident hospitalisations for stroke (ICD-10-AM, I60–I64). For patients who had incident NSAID prescription and stroke hospitalisation within a 12-month period, we ascertained the prescription event sequence, determined the sequence and adjusted sequence ratios, and calculated 95% confidence intervals.

A sensitivity analysis was also conducted to confirm the robustness of our primary findings. The analysis was limited to those patients who were incident users of an NSAID within a 12-month period — that is, those who had no previous dispensing of any NSAID for at least 12 months before incident NSAID dispensing. Additionally, patients were only included in the analysis if they did not switch NSAIDs in the 12 months after incident NSAID dispensing.

The absolute risk of stroke in our study was low: 7.1 strokes/1000 people/year, derived from those who had a stroke in the 12 months before incident NSAID use. However, analysis showed a 1.88 times (95% CI, 1.70–2.08) increased risk of hospitalisation for stroke (ischaemic or haemorrhagic) following incident dispensing of an NSAID (Box 1), with a strong temporal association observed (Box 2). This equates to an increased absolute risk of 13.4 strokes/1000 people/year. Significant positive associations between starting an NSAID and having a hospitalisation for stroke were found for all NSAIDs except ibuprofen, with ASRs ranging from 1.44 (95% CI, 1.16–1.80) for indomethacin to 1.80 (95% CI, 1.59–2.04) for rofecoxib (Box 1).

The results from this Australian population-based study demonstrate that initiation of NSAIDs is associated with an increased risk of incident stroke, including ischaemic and haemorrhagic, in the older veteran population. However, the absolute risk of stroke is low and the increased risk is thus small. Nevertheless, small increases in risk may be particularly important for older people, who commonly have comorbidities that are associated with increased risk of stroke. At least a third of the older population will have cardiovascular disease (CVD) and 20% will have comorbid arthritis and CVD,27 meaning that NSAIDs will commonly be used by patients who are at risk of future cerebrovascular events.

An increased risk of stroke was also observed in our study with the commonly used NSAID diclofenac, which has similar selectivity for COX-2 as celecoxib, but is available without a prescription. We observed that diclofenac was associated with a similar increase in risk of stroke (including ischaemic and haemorrhagic) to that of rofecoxib, which was withdrawn from the market in 2004 because of concerns about its cardiovascular safety. In general, the non-selective NSAID naproxen and, to a lesser degree, ibuprofen (particularly low-dose) have been reported as having better cardiovascular safety than other NSAIDs.10,11 These NSAIDs are similar in terms of their lack of selectivity for COX-2. However, in our study, the evidence for risk of stroke with these non-selective NSAIDs is less clear.

While the majority of studies to date have reported an increased risk of stroke with NSAID use, there are some conflicting results.5,31 One study in the veteran population reported no significant association between NSAID use and ischaemic stroke.31 However, its authors acknowledge that they did not differentiate between incident and prevalent NSAID users (the inclusion of prevalent users would reduce the effect of NSAID exposure towards the null, as a result of potential survivor bias).

Increased risk of cardiovascular events associated with NSAID use has been reported in high-risk patients with established CVD,6,32 highlighting the importance of considering individual patient characteristics when determining which NSAID should be prescribed. Current guidelines advocate the use of paracetamol as first-line therapy for pain management, and if an NSAID is deemed to be required, the lowest dose should be prescribed for the shortest duration.33 Non-NSAID analgesic strategies might also be considered for such patients.

The association of increasing COX-2 selectivity with increasing risk of stroke is less evident in our study, and it is likely that a number of factors contribute to the overall cardiovascular safety of NSAIDs. Variations in the pharmacodynamics of different NSAIDs have been reported to be independent predictors of cardiovascular risk, with slow-release formulations posing a greater risk of myocardial infarction, presumably as a direct consequence of prolonged drug exposure.34 Increasing dose and length of exposure to NSAIDs have also been reported to raise the risk of stroke.11,13,34 Effects of NSAIDs on blood pressure, volume retention and other renal effects will further contribute to cardiovascular risk.15

We were unable to examine the use of over-the-counter, non-prescription NSAIDs. However, the veteran population has access to prescription medicines at a subsidised cost, and there is little incentive to purchase their medicine elsewhere. Our results are likely to be applicable to the Australian population. Age-specific comparisons between DVA gold card holders with no service-related disability and the wider Australian population have shown similar rates of general practitioner visits, use of prescriptions and hospitalisations.35

Prescription event sequence symmetry analysis provides a method for rapid assessment and uses the individual patients as their own controls, thereby minimising any potential bias caused by individual variations.23 Further, the sensitivity analysis included only incident users who did not switch NSAIDs, potentially reducing bias where developing the outcome can increase with time. However, the analysis is associative only and does not prove causality. This type of analysis has been proposed as an important tool for post-marketing surveillance and monitoring of adverse drug events which have relatively short latency, using population-based data.23 Undertaking this same analysis using the national data would further strengthen the evidence of association.

In conclusion, we report that incident use of NSAIDs is associated with an increased risk of stroke. Although rofecoxib has been withdrawn from the market, meloxicam, diclofenac and celecoxib accounted for almost two-thirds of all NSAID dispensings in 2008 in Australia,26 and all were shown to be significantly associated with increased stroke risk. Individual assessment of cardiovascular risk, careful deliberation of the balance between risk and benefits and appropriate supervision is required when initiating NSAID therapy. Enhanced patient awareness of the potential for serious adverse cardiovascular events with all NSAIDs may also attenuate risk.

1 Risk of first stroke after and before initiation of non-steroidal anti-inflammatory drug (NSAID) use, by incident stroke type and NSAID* 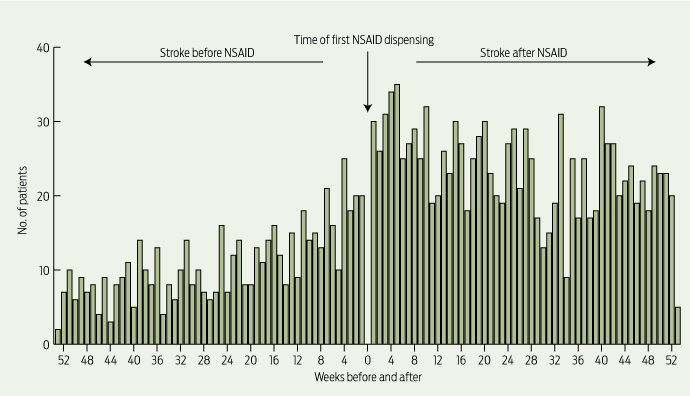 Acknowledgements: Elizabeth Roughead was supported by an Australian Research Council Future Fellowship. We thank the Australian Department of Veterans’ Affairs for providing the data used in this study.