Design and setting: Content and framing analysis of a structured sample of print news items about psychiatric genetics published in Australian newspapers between 1996 and 2009.

Results: We analysed 406 eligible items about the genetics of psychiatric disorders. News coverage of psychiatric genetics has steadily increased since 1996. Items attributing the aetiology of psychiatric disorders to gene–environment interactions (51%) outnumbered items attributing only genetic (30%) or only environmental factors (20%). Of items that referred to heritability of mental illness, frames of genetic determinism (78%) occurred more frequently than probabilistic frames (22%). Of frames related to genetic prophesy, genetic optimism frames (78%) were used more frequently than frames of genetic pessimism (22%). Psychosocial and ethical implications of psychiatric genetics received comparatively relatively little coverage (23%). The analysis identified 22 predictions about psychiatric genetic discoveries and the availability of molecular-based interventions in psychiatry, most of which (20/22, 91%) failed to manifest by the predicted year.

The mass media are a key source of health and science information for the lay public.1,2 Medical genetics has received substantial coverage in the international media over the past few decades, with greater intensity of coverage appearing to coincide with announcements of discoveries of new susceptibility genes.1 Media discourse about genetics and mental illness has been negligible.

Medical issues are placed higher on the public and political agenda when they receive intense coverage in the media.3 Journalists’ choice of news angle and scientists’ selective emphasis of certain aspects of their research contribute to framing and help push an issue higher up the news agenda. Analysing news frames thus offers a way to systematically examine the likely influence of media agendas on public thinking.4

The present study aimed to qualitatively analyse news articles about the role of genes in depression, bipolar disorder and schizophrenia in the Australian print media by mapping the use of the frames of genetic determinism, genetic optimism and genetic pessimism. We hypothesised that (i) probabilistic framing (eg, susceptibility genes) would be more prevalent than deterministic framing, and (ii) that the frame of genetic optimism would be used more frequently than that of genetic pessimism.

Relevant newspaper articles were systematically identified on the Factiva database (Dow Jones, http://www.factiva.com) via date-limited keyword searches from 1 January 1996 to 31 Dec 2006 and later updated to 31 Dec 2009, using a keyword formula: (depression or bipolar or (manic depression) or schizophrenia) and (gene or genes or genet* or DNA).

News stories were examined using content12,13 and frame analysis.4 After removal of duplicates, off-topic articles and articles only briefly mentioning psychiatric genetics, items were judged to be eligible for analysis and studied for relevant content.

Ten per cent of the sample was informally recoded (B M) to identify any discrepancies in the interpretation of codes. The coding instrument was then refined by merging, deleting, or inserting codes, and revising coding descriptions until the informal assessment suggested an adequate level of agreement by consensus.15

Ten per cent of the sample was double-coded (C B) to allow for a formal intercoder reliability assessment. This coding was performed independently and without consultation or guidance. Cohen’s kappa was used to calculate interrater reliability15,16 and yielded a kappa coefficient of 0.68 (SD, 0.25), which represents good agreement beyond chance for a 23-item coding tree.17

Coded articles were subsequently analysed for existing and emergent frames using QSR N6 software (QSR International, Melbourne, Vic),18 according to the methods described by Miles and Huberman.19 This facilitated comparisons between articles from different publications and years as well as other aspects of the analysis. The conceptual approaches of Entman4 and Scheufele12 were used to guide the framing analysis.

The systematic database search retrieved 3623 news items. Exclusion of ineligible articles resulted in a final sample of 406 news items across 14 Australian news publications from 1996 to 2009.

We found that the number of items about psychiatric genetics increased steadily over the 14-year period, with more than 50% appearing since 2005.

Peaks in coverage coincided with the publication of the Human Genome Project in 2001 and the upsurge of direct-to-consumer genetic tests for risk of mental disorders during 2007–2008.

In relation to genetics and mental illness, depression featured the most frequently in the sample (199/406 items, 49%), followed by schizophrenia (181/406 items, 45%) and bipolar disorder or “manic depression” (83/406 items, 20%). Some items included more than one of the three target disorders.

The dominant discourse about aetiology of depression, bipolar disorder and schizophrenia focused on interaction between genetic and environmental risk factors (179/354 items, 51%). Gene–environment interactions tended to be framed as a genetic predisposition with environmental factors acting as triggers: “If you want to know if you have a genetic disposition to schizophrenia or other mental illness, indulge in cannabis because it will trigger it.’’20

Portrayal of genetic aetiology of mental illness (105/354, 30%) focused on one or more genes, genetic variants or gene expression: “The mystery of schizophrenia is being unravelled, with a breakthrough identifying a number of genes that may cause the disorder.”21

Of items that attributed the aetiology of mental illness to environmental factors alone (70/354, 20%), stressful life events (17/70, 24%) were presented as the dominant factor: “The biggest ... cause [of depression] is probably a life experience such as the death of a loved one, loss of a job or repeated bullying.”22

Ninety-one of 406 items (22%) carried messages about the role of genes in the development of mental illness (Box 2). Of these, genetic determinism was the dominant frame (78%): “In a world first, researchers from NSW have discovered the gene responsible for depression.”23

Twenty of the 91 items (22%) framed the role of genes as probabilistic rather than deterministic: “[Dr Tiller said] having a genetic predisposition to [depression] did not mean it was expressed.”24

Common optimistic discourse used the terms “hope”, “world first” and “breakthrough”, and often alluded to the perceived positive impact of genetic discoveries on future treatment options: “For the first time, researchers have hard evidence that genetic mutations in the immune system are linked to schizophrenia ... the findings provide hope of better treatment for the devastating psychiatric disorder ...”25

Pessimistic discourse about genes and mental illness focused on negative impact of labelling, negative political agenda, and increase of stigma and/or risk of eugenics: “Genetic testing [for a mental illness] seems certain to allow doctors to predict which diseases patients are likely to develop years before they show symptoms — raising the prospect of a ‘genetic underclass’ ...”26

Discourse about ethical and social implications of psychiatric genetic testing occurred in 95 of 406 items (23%). These implications included stigma, threat to privacy of genetic information, equity of access to genetic services, eugenics, genetic discrimination by employers and insurance companies, the right to know or not to know one’s genetic information, impact on relatives and risk of distress.

One hundred and seventy-five items (43%) reported six potential clinical outcomes of genetic research in psychiatry: preventive interventions (50/175, 29%); pharmacogenetics (49/175, 28%); predictive genetic testing (44/175, 25%); gene therapy (13/175, 7%); improved treatments and technology (11/175, 6%) and personalised medicine (8/175, 5%). As noted above, potential clinical outcomes were predominantly framed in terms of genetic optimism: “If people know that they have a genetic susceptibility it may become possible to avoid episodes of mania or depression by monitoring and treating early changes in brain chemistry, or by trying to reduce environmental triggers, such as stress ...”27

Most predictions (20/22 , 91%) failed to occur by 2011.28 Two items accurately predicted in 1998 and 2001, respectively, that genetic tests or genome sequencing involving psychiatric disorders would be available by 2010. Such tests became available by about 2007 via unregulated commercial direct-to-consumer services, although many have since been withdrawn.30

This is the first systematic analysis of Australian news depictions of psychiatric genetics. The rapid rise in the quantity of media coverage about genetic advances in psychiatry since 1996 suggests that the subject is gaining importance on public and political agendas. The finding that peaks in media coverage of genetic advances coincided with significant scientific announcements is consistent with previous observations.1

Deterministic framing was more frequent than probabilistic framing, in contrast to our first hypothesis. The need for editorial brevity can pressure journalists to transform complex concepts about genetic penetrance in multifactorial disorders into shorter more accessible deterministic statements, with the risk of distorting meanings. The predominance of portrayals of the contribution of both genetic and environmental factors to psychiatric disorders contradicts earlier research, which found that the influence of non-genetic factors and/or gene–environment interactions was rarely mentioned.31 However, in the present study, messages about the power of the genetic component were primarily deterministic, which suggests that the public may be misinformed about the complexities of the genetic underpinnings of mental illness and their interaction with the environment.

The genetic optimism frame predominantly described utopian expectations of molecular-based future treatment for psychiatric disorders; in particular, preventive interventions, pharmacogenetics and genetic testing. It has been proposed31 that it is not only editors and journalists who set the agenda underpinning positive images about the clinical benefits resulting from genetic research. Scientists’ commercial interests are emerging as a source of positive bias in medical reporting,32,33 although this was not investigated in our study. Negative images of genetic research, such as reports of regular failures to replicate genetic associations with certain diseases,1 and items with negative messages about eugenics, were less frequent than optimistic messages. This finding supports our second hypothesis that the frame of genetic optimism would be used more frequently than that of genetic pessimism.

The high prevalence of overpromising of clinical benefits from psychiatric genetic research is consistent with the results of previous research.1,31 This is likely to reflect journalists’ inclinations to cover news from high-impact journals, which tend not to publish negative studies.1 Because the news media are a major source of public knowledge of genetics, optimistic framing may distort public understanding of the influence of genes in multifactorial disease and future options for preventing, treating and managing mental illness.

The low frequency of items about social and ethical issues, such as the potential for genetic discrimination by employers or insurance companies, suggests that the social and ethical implications of psychiatric genetics research are a low priority on the public and political agenda.3 This could potentially have negative consequences for individuals affected by depression, bipolar disorder or schizophrenia.

Before drawing any conclusions about the full spectrum of media representation of psychiatric genetics, portrayals in other media formats should be investigated. Contrary to recommendations,13 our formal coder was not blind to the purpose of the study and the research question guiding the investigation. This was unavoidable, given the complexity of the coding tree and the necessity that the coder should fully understand the variables and their descriptors. Systematic analysis of how frames vary with article quality would help to further determine whether there is a mismatch between scientific understanding and medical reporting.

Our study has shown that there is a lack of balance between the perceived positive outcomes of psychiatric genetic research and critical commentaries about potential ethical and social implications. Optimistic predictions about the use of genetic information in psychiatry could encourage unrealistic public expectations about how future mental health problems might be solved.

Media framing: the way in which journalists’ choice of angle, sources and quotes highlights some issues and sidelines others, thus defining problems, assigning causes and attributing responsibility.4

Causal attributions for mental illness: genetic and/or environmental factors or gene–environment interactions perceived as contributing to the development of mental illness. 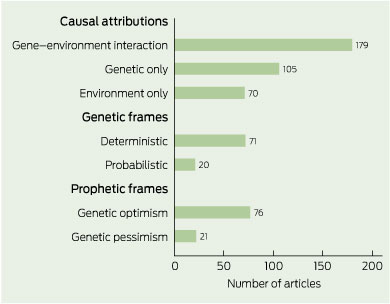 We thank Nadine Kasparian for training in the use of QSR N6 software and Dusan Hadzi-Pavlovic for training in calculating interrater reliability. This study was supported by a National Health and Medical Research Council (NHMRC) Public Health PhD Scholarship (455414), an NHMRC Career Development Award (350989) and an NHMRC Program Grant (510135).