A 62-year-old woman was referred to our hospital after a left-sided uveitis failed to respond to both topical and systemic steroids.

She was known to have systemic lupus erythematosus (SLE) with severe arthritic changes, but had not received immunosuppressive therapy. She had right temporal lobe surgery in 1995 for a benign brain tumour. In 2005, she had Legionella pneumonia that had resulted in an intensive care unit admission with multiorgan failure and acute respiratory distress syndrome. As part of the diagnostic work-up during her previous admission, she was diagnosed as having herpes simplex virus (HSV) type 1 and was treated with aciclovir. She had no known history of genital or oral herpetic lesions. She had no significant ophthalmic history.

When she was first reviewed at our hospital, she had been symptomatic for 3 weeks. She had been diagnosed as having an SLE-related panuveitis and had been treated with topical, regional and systemic steroids for 2 weeks with no response; on presentation, she was taking oral prednisolone, 1 mg/kg/day. She described a loss of appetite for 6 weeks but had no headache, fever, rash, pleuritic chest pain or shortness of breath suggestive of a lupus flare.

Her initial visual acuity was 6/9 in her right eye and “hand movements” in her left eye. There was a relative afferent pupil defect in her left eye. Her anterior chamber had large mutton-fat keratic precipitates, fibrin and posterior synechiae — all indicative of a granulomatous uveitis. There was no fundal view of the left eye. An ultrasound scan of the left eye showed vitreous debris and a retinal detachment. Fundal examination of the right eye showed one or two small scattered intraretinal haemorrhages (Box 1, A).

Fluorescein angiography (Box 1, B) of the right eye showed mild leakage from the disc and vessels in keeping with an early vasculitis. There was no view of the left fundus.

An anterior chamber tap and vitreous biopsy were taken from the left eye. Bacterial and fungal microscopy and culture were negative; results of cytological analysis were normal. There was insufficient specimen for viral polymerase chain reaction (PCR). (This is a common occurrence for aqueous and vitreous samples, in which the amount taken averages 0.4 mL.) Blood sampling showed an antinuclear antigen positive to a titre of 1 : 2560 (> 1 : 160 considered positive for probable autoimmune disease), an erythrocyte sedimentation rate of 38 mm/hour (reference range, < 20 mm/hour for women aged > 50 years), and anti-DNA antibodies > 100 IU/mL (reference range, < 6 IU/mL); a white cell count and serum angiotensin-converting enzyme levels were normal, and human leukocyte antigen (HLA)-B27 was not detected. Serological testing was negative for syphilis and HIV. Blood culture was negative. An echocardiogram and chest x-ray were non-contributory.

At this stage, the differential diagnosis included a masquerade syndrome (intraocular lymphoma), active lupus, or an endogenous, infective endophthalmitis. The patient was referred for a surgical vitreous biopsy. She continued to take oral prednisolone 1 mg/kg/day.

Two days later, there was a marked deterioration in the patient’s vision. Her visual acuity was recorded as “no perception of light” in both eyes. She had no headache, but she was febrile. Her right eye now had anterior chamber and vitreous cells and widespread retinal haemorrhages (Box 1, C).

Magnetic resonance imaging (MRI) of the patient’s brain showed an area of encephalomalacia in keeping with her previous surgery. Inflammatory changes and a retinal detachment were noted in the left globe. The optic nerves appeared normal. No orbital masses were noted, and no cavernous sinus pathological features were observed (Box 2, A). A surgical vitreous biopsy was performed on her left eye.

The next day, she was found to have a deteriorating neurological status. She was delirious and seemed unable to hear and follow commands. She remained febrile. A lumbar puncture was performed. PCR of cerebrospinal fluid and vitreous fluid samples were positive for HSV type 1. In addition, the cerebrospinal fluid had 75 lymphocytes/mm3 and normal cytological features.

She was commenced on intravenous aciclovir. A repeat MRI scan 8 days after the initial scan showed increased signal on flair involving the thalamus, occipital, temporal lobes and brainstem in keeping with an encephalitis (Box 2, B).

She failed to improve clinically and died 3 weeks later. An autopsy was refused by the family, but the cause of death was pressumed to be herpes simplex encephalitis (HSE).

Acute retinal necrosis (ARN) associated with HSE has been well described. Most published reports describe the ocular findings following the encephalitis with a variable time course; the mean interval is 6 months but it can range between 10 days and 20 years.1-6 To our knowledge, there has been only one report published of HSE following ARN.7

When ARN follows HSE, it is assumed that a reactivated latent virus is axonally transmitted from the brain to the retina. A retrospective study published in 2008 examined the causative virus among 52 patients with ARN.8 It found that 14% had a history of previous HSE. There were no cases in which ARN preceded the encephalitis.

In one case report, the authors noted that there have been 20 cases of ARN following HSE published in the past 20 years, and only one case of HSE following 3 weeks after ARN.9

HSE remains a serious illness with significant risk of morbidity and death. A high index of suspicion is required to diagnose HSE. Neurons undergo lysis associated with haemorrhage — a process similar to that seen in the eye with ARN. The exact mechanism of cell death is postulated to be a combination of direct virus-mediated and indirect immune-mediated processes.8,10 Without treatment, the brain undergoes severe inflammation and necrosis.

Our patient had a history of HSV years before the current presentation. There was, however, no history of preceding encephalitis. We hypothesise that the unguarded use of steroids may have caused reactivation of the virus and subsequent spread to the brain via retrograde axonal transport from the eye or from a generalised viraemia.

This case highlights the importance of considering a viral aetiology in cases of atypical uveitis. ARN may herald systemic or cortical disease. Viral PCR should be performed before commencing systemic steroids. Herpetic disease may remain latent for many years before presenting in a previously uninvolved tissue. Intraocular inflammation remains a diagnostic challenge frequently encountered in ophthalmic practice. It remains imperative that all patients presenting with a possible uveitis be referred to an ophthalmologist.

1 Photographs of the patient’s right fundus

2 Magnetic resonance imaging of the patient’s brain and orbits 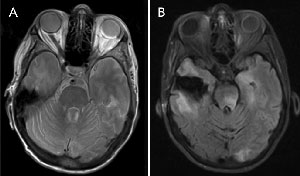 A. Old area of encephalomalacia on the right, and inflammatory changes in the left globe. B. Repeat scan showing increased signal on flair settings.

None relevant to this article declared (ICMJE disclosure forms completed).