Objectives: To examine the circumstances of animal exposure in a case series of Australian travellers who required rabies postexposure prophylaxis, and to assess the appropriateness of current guidelines for rabies pre-exposure vaccination.

Results: Animal bites and scratches occurred most commonly among travellers aged 20–29 years. Most injuries occurred in Bali, Indonesia (30 [46%]) and Thailand (21 [32%]), and the most common animals responsible for the injuries to the 65 travellers were monkeys (29 travellers [45%]) and dogs (27 [42%]). Thirty-nine of the travellers (60%) initiated contact with the animal. Forty travellers (62%) were able to commence rabies vaccination overseas, but only nine (14%) were able to obtain rabies immunoglobulin overseas.

Conclusions: Most travellers had difficulty obtaining rabies postexposure prophylaxis overseas, resulting in significant delays in appropriate treatment. We recommend that current National Health and Medical Research Council guidelines for at-risk persons be broadened, and that the risk of rabies and the option of pre-exposure vaccination be discussed with all travellers to rabies-endemic areas.

Rabies poses a threat to over 3.3 billion people worldwide, and causes an estimated 55 000 deaths each year.1 The disease is endemic in Asia, Africa, Europe and the Americas, and is maintained by a wide range of animals. The vast majority of deaths occur in Asia and Africa and, annually, more than 15 million people receive postexposure prophylaxis (PEP) for rabies.1 Australia is free of rabies, but Australian bat lyssavirus causes a rabies-like illness.2

Australians make 6.8 million short-term international departures each year, with over 3 million of these to Asia.3 Many travellers are therefore exposed to the risk of rabies. The emergence of rabies in Bali, Indonesia, since 2008 has resulted in over 100 human deaths,4 and returned travellers from Bali now account for a significant proportion of those seeking rabies PEP in Australia.5

Travellers can be protected from rabies by either vaccination before exposure, or PEP. The World Health Organization (WHO) recommendations for PEP include prompt wound cleaning, administration of rabies immunoglobulin (RIG) into or around the wound, followed by a course of rabies vaccines.1 Ideally, PEP should be commenced as soon as possible after any potential exposure to rabies. Although it is possible for travellers to seek PEP overseas, it can be difficult for them to obtain treatment promptly, and RIG is often unavailable.1 Vaccination against rabies before exposure eliminates the need for RIG, reduces the number of vaccine doses after a potential exposure, and reduces the urgency of starting PEP.

In this article, we pose the question: Are the current Australian guidelines for rabies pre-exposure vaccination appropriate, given the common circumstances in which travellers are exposed to animal bites? To examine this question, we report a case series of travellers who were bitten or scratched by animals in rabies-endemic areas and sought PEP on their return to Australia. We describe the circumstances of their exposure and their experience with obtaining PEP overseas, and we consider these findings in the context of the current NHMRC guidelines for rabies vaccination.

We collected data on travellers who were bitten or scratched by animals in rabies-endemic areas, and who presented to three travel medicine clinics in Queensland (Brisbane, Gold Coast, and Maroochydore) and one in Western Australia (Perth) between 1 April 2009 and 31 July 2010. All returned travellers who presented for PEP were included, and the treating doctor used a questionnaire to collect the data.

The questionnaire used by doctors at each clinic sought routine information on:

Fifty-one travellers (78%) reported bites, and 11 (17%) reported scratches. The most common body parts injured were the hand (including thumb or fingers), followed by the leg and the arm (Box 2).

Box 3 shows that the most common destinations where travellers were injured were Bali, Indonesia (30 travellers [46%]), and Thailand (21 [32%]). Currently, 9.6% of Australian short-term resident departures are made to Indonesia, and 6.4% to Thailand.3

Injuries in our series occurred with equal frequency in urban (23 travellers [35%]) and rural (22 [34%]) areas; 10 travellers (15%) were injured at an animal park or zoo. Of the 30 travellers injured in Bali, 18 (60%) were bitten or scratched by monkeys, and 13 travellers (43%) were injured while feeding or interacting with the animals at a “monkey forest” or “monkey temple”.

Travellers were injured a mean of 15.3 days after their departure from Australia (range, 0–95 days), and 51 out of 58 (88%) were injured within 30 days. The timing of exposure was unknown for the other seven travellers.

In our case series, most injuries occurred less than 30 days after arriving in rabies-endemic areas, and none of the travellers were working with animals. Many travellers also did not fall into other categories that are traditionally considered “high-risk” (eg, prolonged travel, travelling to rural areas, participating in outdoor adventures, working with animals, or planned activities involving animals). The most common sites for animal bites were hands and fingers, which are high-risk areas for rabies transmission because of rich nerve supplies.

Most travellers were injured while engaging in common tourist activities. More than a third did not initiate contact with animals, which indicates that advising travellers to avoid animals does not guarantee that they will not be bitten.

Our study highlights Indonesia (Bali) and Thailand as particularly high-risk destinations. Considering the recent emergence of rabies in Bali since 2008,7 and the disproportionate number of travellers who were injured while feeding or interacting with monkeys at a monkey temple or monkey forest, we recommend that all travellers to Bali should be warned against these high-risk activities. Travellers aged between 20 and 29 years are at particular risk, and special consideration should be given to this age group when recommending rabies pre-exposure vaccination.

There are potential sources of bias in the study, because it only included travellers who presented to travel clinics on return to Australia, and only clinics in Queensland and Western Australia. Potential exposures are also likely to be underreported, and some travellers might not seek PEP after injuries. Travellers who present to travel clinics are potentially better informed about the risk of rabies, and more motivated to seek PEP.

Our findings confirm the difficulties of obtaining adequate PEP and RIG in developing countries.5,8-10 As a result, there were delays in starting PEP, and only half of our travellers were able to comply with WHO recommendations. With the current worldwide shortage of human RIG,1 difficulties of access are likely to continue. Delays in starting or failure to complete timely PEP may result in vaccine failure and the risk of fatal rabies infection.11 Pre-exposure vaccination against rabies will also reduce the cost of PEP to the health care system, but additional evidence would be required to inform a formal cost–benefit analysis.

Rabies vaccination is safe and effective, and provides long-term protection.1 Pre-exposure vaccination using the intradermal route has been proven to be safe and effective for immunocompetent people when performed at a travel medicine clinic with adequately trained nurses, and can be completed at a third of the cost of intramuscular injections.1,12 However, postvaccination serological testing is recommended 2–3 weeks after an intradermal course to confirm immunity,2 and some travellers will not have sufficient time to complete this before departure.

Based on our findings, we recommend that all travellers to rabies-endemic areas should be counselled about the risk of animal bites, warned about high-risk behaviours, and given the option of pre-exposure vaccination. They should be advised about PEP in case of exposure, the difficulties of obtaining PEP in some parts of the world, and should be allowed to make an informed decision about whether pre-exposure vaccination is appropriate for their circumstances. 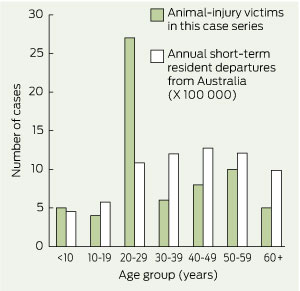 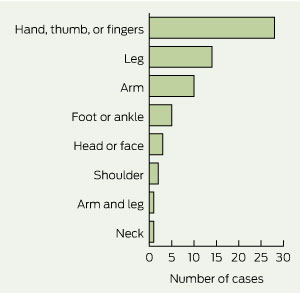 3 Countries where injuries occurred, and the type of animal involved 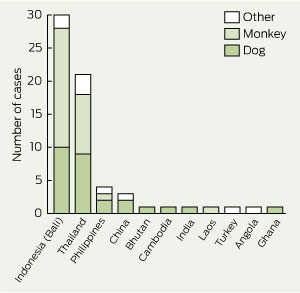 We thank the staff at the Travel Medicine Alliance clinics in Queensland and Western Australia for collecting the data for our study.