To the Editor: MELAS (mitochondrial myopathy, encephalopathy, lactic acidosis and stroke-like episodes) syndrome has not been reported previously in the Aboriginal Australian population. Here, we describe a patient with MELAS syndrome in this population.

A 29-year-old Aboriginal Australian woman presented with a 3-day history of seizures and confusion and a background of cognitive impairment, sensorineural deafness, epilepsy and short stature. On admission, she weighed 29.9 kg and was 1.46 m tall (body mass index, 14 kg/m2). She had myopathic facies, generalised mild motor weakness (4/5) and brisk reflexes (3+). These neurological findings represented a stepwise deterioration from previous assessments.

Magnetic resonance imaging of the patient’s brain demonstrated increased T2 signal involving grey and white matter throughout both cerebral hemispheres, most confluent in the right temporal and parietal lobes (Box 1, A). An electroencephalogram displayed a slow rhythm with epileptic activity in the temporal and centroparietal regions.

Histological examination of a biopsy of the gastrocnemius muscle was consistent with MELAS syndrome (Box 1, B). Electron microscopy of a muscle biopsy sample revealed mitochondria with abnormally arranged cristae and abnormal electron densities. Mitochondrial respiratory chain enzyme studies on muscle samples were within normal limits, but the common m.3243A>G mutation in the MTTL1 gene was detected in about 70% of the mitochondrial DNA (mtDNA) in muscle tissue and in 10% of the mtDNA of the peripheral blood.

MELAS syndrome is a maternally inherited multisystem disorder resulting from mutations in mtDNA.1 Mitochondrial dysfunction leads to the clinical phenotype and lactic acidosis. Cerebral ischaemia unrelated to vascular territories is suggestive of the diagnosis,2 which is confirmed by genetic studies, enzyme assays and histological examination of affected tissue.3

The patient’s family was of Aboriginal Australian descent and she was not aware of any European ancestry. Further inquiry revealed a family history of deafness, diabetes and epilepsy (Box 2). Consequently, the family were offered genetic counselling. A literature review prompted initiation of arginine and coenzyme Q10 therapy.3 Twelve months later, she had good seizure control and had not been re-hospitalised.

The disproportionate differences in health between Indigenous and non-Indigenous Australians are often appropriately ascribed to environmental factors. However, potentially treatable causes should always be considered.

2 Pedigree of the family of the patient (arrow) 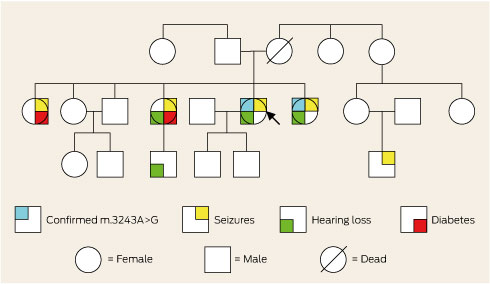