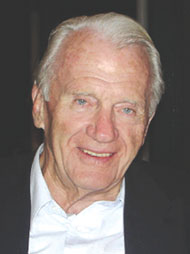 Jim Macken was born in Sydney on 24 January 1924, the eldest child of Irish immigrants. He grew up in Greenwich, Sydney, and was educated at St Aloysius’ College, Milson’s Point. In his final year there he was a prefect and a member of the first XV (rugby) and first XI (cricket). After school, he joined the Commonwealth Bank, while successfully studying for his economics degree part-time.

He switched careers in 1953, commencing his medical studies at the University of Sydney at the age of 29. At university, he was often referred to as “Senator” Macken, as he was a mature-aged undergraduate representative on the university senate.

Jim was a medical student at Royal North Shore Hospital. After graduating in 1959, he undertook his residency at the Mater Hospital, Sydney, before entering general practice at North Bondi. This was a dedicated community practice, with the doctors doing house calls, nursing home visits and obstetrics. Jim remained there for almost 40 years. As a visiting GP Obstetrician at St Margaret’s Hospital, Darlinghurst, Jim delivered many babies over the years, and gained his Diploma of Obstetrics from the Royal College of Obstetricians and Gynaecologists in 1980. He became a Fellow of the Royal Australian College of General Practitioners in 1981 and was an examiner at the College exams for a number of years.

His wide-ranging interest in history, politics, sport, cards and literature enabled him to discuss virtually any subject with his patients, whether young or old. Jim was always immaculately groomed and had a great sense of humour and charming bedside manner. He was a lifetime member of the Balmoral Beach Club and swam in the inaugural Jack Cox Memorial 1500 m swim in 1946. He enjoyed playing golf at the Royal Sydney Golf Club.

For 50 years, Jim was married to Marie, who died from ovarian cancer 4 months before Jim died from cardiac and renal failure on 19 January 2010. Jim is survived by his children Philip, Peter, John, Marea, James and Rosie.