Carl Wood was an outstanding Australian gynaecologist who pioneered in-vitro fertilisation (IVF) and is often referred to as “the father of IVF”. 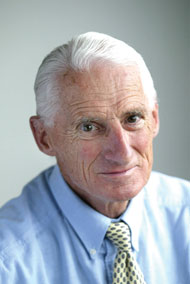 The son of Melbourne gynaecologist Carlyle Wood and his wife Ruth, Carl was born on 28 May 1929. He attended Wesley College, and studied medicine at Melbourne University before specialising in obstetrics and gynaecology. He spent time in London and the United States, pioneering the technique of intrapartum fetal monitoring to predict fetal distress, thus preventing the death of or damage to many babies during labour. In 1964, he was appointed foundation Professor of Obstetrics and Gynaecology at Monash University, a post that he held until 1992.

During the 1970s and 1980s, he led the Monash IVF team, which became the world leader in IVF technology and made a number of significant innovations that changed an experimental process seemingly ruled by chance into a proven treatment for many infertile couples.

Carl also made many other contributions to medicine. He advocated psychosomatic gynaecology, to encourage a holistic approach to women’s physical and psychological health. He was an important contributor to the abortion debate, a cofounder of the Family Planning Association of Victoria, and he introduced sexual counselling into the Monash medical course. He was pivotal in the development of minimally invasive endoscopic surgery for gynaecology, with improved operative outcomes and comfort for women.

As a colleague, he was an excellent clinician, whose surgical skills had to be admired. He quietly solved whatever unexpected challenge he encountered without throwing instruments, having tantrums or blaming the assistant. Even after he stopped obstetric clinical practice, he was consulted by colleagues faced with a challenging patient — testament to the respect he commanded from his peers.

He had many endearing features. He very generously shared the credit for his achievements with his team, was inclusive of colleagues who had skills to offer, and could ignore someone’s negative characteristics while encouraging their positive contribution. He successfully managed the egos of the IVF team, and kept us working together for the common good. But most of all, he was fun to work with. Carl often entertained us with his anecdotes, and was very open and analytical when speaking about himself.

Carl was recognised for his achievements with a Commander of the British Empire in 1982 and a Companion of the Order of Australia in 1995.

After being diagnosed with Alzheimer disease in 2004, Carl endured a long battle until his death on 23 September 2011. He married twice, and his first wife Judy came back into his life as his primary carer and medical guardian during his lengthy illness. He is survived by Judy, and his children Gavin, Simon and Caroline.