Ken was born on 1 August 1939 in Moss Vale, New South Wales. He grew up in Armidale, where he attended The Armidale School and finished as dux of his year.

He studied medicine at the University of Sydney, living at St Paul’s College and graduating with honours in 1963. He then worked at Royal Prince Alfred Hospital (RPAH) and, 2 years later, became a registrar at the associated King George V Memorial Hospital for Mothers and Babies (KGV). In his second year there, he sat the membership examination for the Royal College of Obstetricians and Gynaecologists (RCOG) and received the top mark in Australia.

In 1968, he was appointed clinical superintendent at KGV. He single-handedly altered the whole ethos of the hospital — introducing formal resident training and running regular seminars incorporating interaction with other clinical specialities. 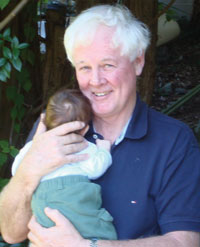 In 1970, Ken was awarded a Joseph Foreman Fellowship. This took him to Massachusetts General Hospital in Boston, where he was surgical resident to Howard Ulfelder, one of the greatest gynaecological surgeons of the time.

In 1971, he returned to Sydney and was appointed visiting medical officer in obstetrics and gynaecology at KGV and then, from 1974, at Ryde Hospital, Poplars Private Hospital and Sydney Adventist Hospital.

After he gave up obstetrics in the mid 1990s, Ken concentrated on gynaecological cancer surgery. He handled most of the gynaecological cancer surgery on Sydney’s upper north shore, and was on call at RPAH for surgical emergencies. He never complained about being called in at any time of the day or night; he did it all with good humour and no one equalled him “when the chips were down”.

He died on 25 November 2010 from complications after a myocardial infarction. He is survived by his wife Susan, and children Tracey, Josephine and Bill.