Frank Fenner was one of Australia’s greatest scientists, internationally recognised for his research into viral diseases and for his achievements in the eradication of smallpox and the control of Australia’s rabbit plague.

He was born in Ballarat on 21 December 1914, the second son of Emma and Charles Fenner. After schooling in Adelaide, he studied medicine at the University of Adelaide, graduating in 1938. As a university student, he gained his Blue in hockey, presaging a lifetime of participation in sport and a love of tennis.

In 1940, he joined the Australian Army Medical Corps, serving in the Middle East, New Guinea and Borneo. His Army service was predominantly as a malariologist, reflecting his studies in tropical medicine. At Hughenden Hospital in Queensland, he treated servicemen and women returning from Papua New Guinea with malaria, and it was there that he met and married Bobbie Roberts in 1943. Fenner’s extensive achievements in controlling malaria were recognised in 1944 when he was made a Member of the Order of the British Empire. 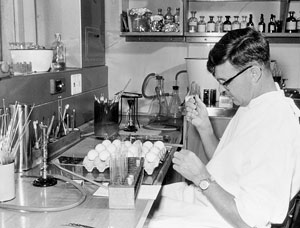 Fenner joined the Walter and Eliza Hall Institute in Melbourne in 1946, working with Sir Frank Macfarlane Burnet. A landmark achievement was their publication of The production of antibodies (2nd edition. Melbourne: MacMillan, 1949), in which they proposed that the exposure of a young, immature animal to foreign cells or tissues would confuse the animal’s immune system into regarding other foreign transplants from the same source as “self”. Fenner’s laboratory research at the Institute focused on mousepox. This work would lead to his commitment to ridding the world of smallpox a quarter of a century later.

In 1949, he was appointed Foundation Professor of Microbiology at the John Curtin School of Medical Research (JCSMR) at the Australian National University (ANU) in Canberra. His first major research there was on using myxomatosis to biologically control the rabbit plague that was wreaking havoc on Australian farming land. The introduction of the myxoma virus into the rabbit population coincided with an outbreak of encephalitis in the Murray–Darling basin. Perceptions that the two events were associated gained currency and, in one of the legendary episodes in the history of Australian epidemics, Fenner and two colleagues inoculated themselves with the myxoma virus to successfully refute that association. The relevance of Fenner’s work on myxomatosis has increased over time, with the emergence of diseases such as AIDS, variant Creutzfeldt–Jakob disease and severe acute respiratory syndrome, which are caused by agents that have crossed from other species rather than coevolving with human hosts. Fenner’s research progressed to another pox virus, vaccinia or cowpox, which was used clinically in vaccination against smallpox.

His growing reputation in the 1950s was reflected in his election as a Fellow of both the Australian Academy of Science and the Royal Society. Further recognition of his scientific standing came in the 1960s with a Leeuwenhoek lectureship of the Royal Society and a Britannica Australia award.

In 1967, he left bench for books to become the first Director of the JCSMR. His most notable publications were The biology of animal viruses (New York: Academic Press, 1968) and Medical virology (New York: Academic Press, 1974). His experience with pox viruses led to an invitation to join an international scientific project to eliminate smallpox and, in 1977, to his appointment as Chairman of the Global Commission for Certification of Smallpox Eradication. He later nominated 8 May 1980, when he announced the eradication to the World Health Assembly, as the proudest day of his life.

Fenner’s environmental interests underpinned his appointment as founding Director of the Centre for Resource and Environmental Studies at the ANU in 1973. They also found expression in his roles as Vice President of the Australian Conservation Foundation (1971–1973) and as a member of the Senior Scientific Advisory Board of the United Nations Environment Programme. During this period, recognition of his achievements included being made a Companion of the Order of St Michael and St George in 1976, followed in 1977 by election as a foreign associate of the United States National Academy of Sciences.

On retirement in 1979, he returned to the JCSMR to work with undiminished intensity. Perhaps the most visible aspect of his retirement was the succession of awards he received. Among these were the 1980 Anzac Peace Prize, the 1988 Japan Prize, being made a Companion of the Order of Australia in 1989, the Copley Medal of the Royal Society in 1995 and the Prime Minister’s Prize for Science in 2002. He wrote a number of books dealing with historical aspects of science and was coauthor of the encyclopaedic Smallpox and its eradication (Geneva: World Health Organization, 1988). In an instructive illustration of the durability of scientific knowledge, more than 20 years after his nominal retirement he was advising national expert groups on the potential for pox viruses in bioterrorism.

As well as his more widely publicised achievements in retirement, his philanthropy and his unstinting accessibility to academics and students were notable. As a Visiting Fellow at the JCSMR, he represented a repository of information on virology. If he did not have the required information at his fingertips, he could invariably tell one exactly where it could be found.

Frank Fenner died on 22 November 2010 after being admitted to hospital with septicaemia. He is survived by his daughter Marilyn.