In clinical settings, cognition is assessed using standardised tasks, and performance of these tasks typically declines with age.1 In older people, disorders of the central nervous system (CNS) often present with impairment in cognitive function. In degenerative diseases, such as Alzheimer’s disease (AD), cognitive impairment is a requirement for diagnosis. However, subtle cognitive impairment can provide the earliest preclinical indicator of the disease process. Therefore, one important challenge for clinicians is to separate expected age-related changes in performance from performance impairments that suggest some CNS disease process. This task usually falls to clinical neuropsychologists, who use well validated tests with sound psychometric properties and normative standards.

The availability of demographically appropriate, normative performance ranges is crucial to this endeavour. However, for many neuropsychological tests, such normative ranges are based on small samples with demographic characteristics quite different from those in the Australian context. Comparing performance on neuropsychological tests with normative data ranges based on small or non-representative samples can diminish the accuracy of decisions made about an individual’s cognitive functioning.

The recruitment of large samples for establishing normative data ranges can be expensive and time consuming. Therefore, it is important that, when such resources have been committed, the results are made available to the broader community of scientists and clinicians managing CNS diseases in older Australians. Advances in information technology now make it possible to disseminate this information widely to the community and even provide tools promoting ease of access to such databases.

A collaborative project between the AIBL clinical research team and the Australian e-Health Research Centre led to the development of a web-based tool to access databases of normal subjects based on the AIBL sample. This tool allows immediate comparison of patients’ results with the normative dataset. Here, we introduce the AIBL normative data tool and consider its usefulness in both research and clinical settings.

Development of the normative data tool
Selection of subjects

Of the AIBL study’s baseline cohort of 1112 participants, 211 had AD, 133 had mild cognitive impairment, and the remaining 768 were healthy control subjects.2

To select a healthy normal subset, the following procedures were performed on the data from the 768 control subjects. All participants were classified using a variation of a random forests classifier.4 Individuals in the healthy control group “most” misclassified as having either mild cognitive impairment or AD were removed from the dataset, and the model was run again. This was repeated until no healthy control subjects were misclassified. In addition, those individuals with scores over 0.5 on the clinical dementia rating scale (a five-point scale used to characterise six domains of cognitive and functional performance) were also excluded from the analysis.

This led to the exclusion of 41 individuals, leaving a sample of 727 healthy subjects. Box 1 provides a summary of the characteristics of the normative dataset. For constructing the normative tables, age was divided into five intervals, and level of education into fewer than 12 years and 12 or more years of education.

To select which demographic variables were significant predictors of the neuropsychological measures, the following procedures were employed.

Some variables were prone to ceiling effects in performance (eg, a normal score on the Short Form Boston Naming Test is close to the maximum value of 30). In such cases, a Tobit regression model7 was fitted to the data. For variables in which no model seemed to be appropriate, quantiles were produced.

To assist with the translation of this research into clinical practice, the Cognitive Performance Calculator (CPC) was developed, which simplifies the clinical use of the normative data. The CPC generates a summary report comparing the neuropsychological measures supplied by the user with the statistical models fitted to the normative dataset. To generate the report, all of the mandatory demographic variables and at least one neuropsychological measure must be entered into the CPC’s data entry page (Box 2).

Box 3 shows an example report generated for a 78-year-old woman with fewer than 12 years’ education, who scored 8 on the Rey Complex Figure Test (30-minute delayed recall).8 The result of this test equates to a z score of − 0.80; that is, slightly below the value predicted by the model.

The report summarises the relationship between the normative dataset and the input variables, and can be downloaded in text or PDF formats.

We have described the development of a novel, Australian-specific web tool to compare a patient’s cognition with a representative Australian dataset. This is the first such normative guide, and it is augmented by a user-friendly web interface.

The data produced are in formats commonly used by specialist neuropsychologists and other psychologists, who are trained in interpreting patterns of performance on psychometric tests of cognition. The ability to quickly and accurately compare patients’ scores with the expected scores for their age, education and demographic characteristics will allow improved classification, standardised results and greater efficiency. The web tool also provides a pictorial representation, allowing a quick examination of a number of test scores compared with the normative population. This can give an overall view of a patient’s performance.

Increased efficiency is a key element of this tool. Clinicians can enter a few values into the CPC and will be provided with a report giving both a pictorial snapshot of performance (compared with the average), as well as values that can be imported into commonly used computer programs. This is particularly useful if the data form part of a clinical trial or other research study.

After release to qualified users in the near future, this tool, and the normative data on which it is based, will continue to be refined as new data become available. This will allow for greater specificity in distinguishing cognitive decline associated with mild cognitive impairment from normal age-related cognitive change in the “worried well”.

Analysis of data from the AIBL Flagship Study of Ageing has provided normative values for older Australians for commonly used cognitive tasks. These data can be used in preference to currently available norms based on smaller samples from international cohorts. A web-based application automates the calculation of normed data. Time is a key resource in clinical and research settings, and this tool will improve both the accuracy and efficiency of interpreting neurocognitive results. 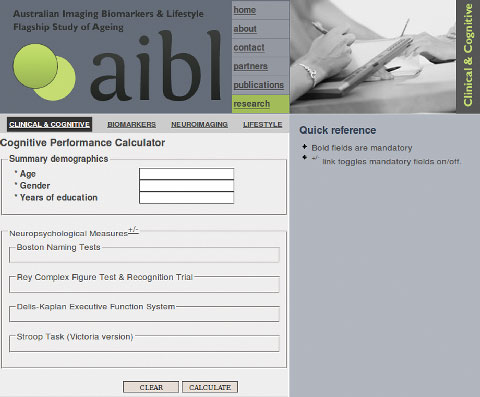 The data entry page has been designed to make data entry as fast and easy as possible. The cursor is automatically placed in the “Age” field and the “Tab” (forward) and “Shift-Tab” (backward) keys are used for field navigation. On the last field, “Tab” moves the cursor to the “Calculate” button. The “Clear” button clears all values in all fields. The “Calculate” button is not enabled until the minimum amount of data for a valid calculation has been entered. All demographic variables and at least one score for a neuropsychological measure are required. 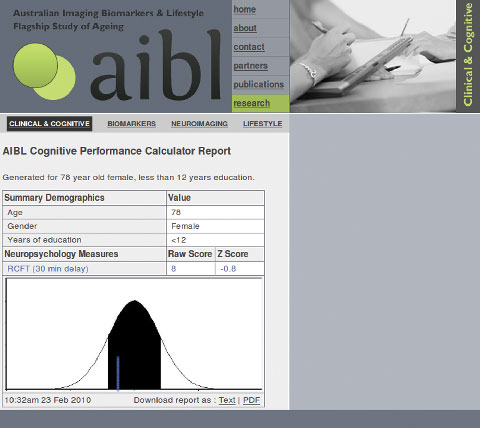 Report for a 78-year-old woman with fewer than 12 years’ education, who scored 8 on the Rey Complex Figure Test (30-minute delayed recall).

For a list of members of the AIBL Research Group, see