Doctors writing outside the square

Three doctors from Victoria who wrote “outside the square” of their professional lives were Dr Graeme Robertson, Sir Clive Fitts and Professor Richard Lovell. They were near contemporaries on the staff of the Royal Melbourne Hospital in the years after the Second World War. They lived in changing times, and this is captured in their written works. Here, I give a brief outline of some of what they wrote and how they came to write it. Because of the skill and artistry of the authors and the subjects they chose, these writings remain of interest today. 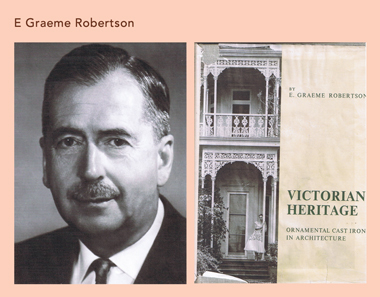 Graeme Robertson was one of the founders of the specialty of neurology in Australia. A gentle and cultivated man, he was an outstanding clinician and teacher and attained international eminence for his research on neuroradiology. His medical publications included a monograph on Pneumoencephalography.1 As well as his publications on neurology, he wrote Victorian heritage, the first of a series of books on cast iron decoration of 19th century buildings in Melbourne.2 In the foreword to this book, he wrote:

While in Melbourne, my friend, Mr William Pain, Life Magazine correspondent, with his usual perceptiveness remarked, “Melbourne is a Victorian Museum”. This crystallized what had been in my mind since I commenced this book. As the photographs were taken it seemed that a different and largely unpictured Melbourne was emerging — Melbourne seen, as it were, from the point of view of, and through, cast iron ornamentation.

Victorian heritage is based on a magnificent collection of black and white photographs, all taken by Robertson himself. The focus is on the interior and exterior of buildings erected between the 1840s and the turn of the century. They are brought to life by a skilful balance of light and shadow. On occasion we find someone on the balcony, often Robertson’s daughter Joan, or a group of people in front of the house — two vagrants, a boy and a nun in medieval habit in a picture titled simply “Conversation piece”. Another shows a cabman and his cab in front of a house with a striking balcony, titled “The last cab in Melbourne”. Robertson reflected:

How the cabman keeps his horse so well fed, so long after he has served a useful purpose, is a major mystery. What a bond, stronger than harness, must exist between the cabman, his horse and cab!

Aside from more than 200 photographs, Victorian heritage contains detailed descriptions of the local manufacture of cast iron, the history of its use, and details of the patterns employed and how these changed with time. The book includes pictures of cast iron facades in London, Paris, New Orleans and Thailand.

Robertson took cast iron decoration as a window through which we can view an aspect of the development of the city of Melbourne in a time of great change: its early settlement, with imported prefabricated cast iron houses arriving without instructions on how to assemble them; the gold rush, and the sudden increase in population and wealth that resulted from it; and the land boom, with the disastrous economic depression of the 1890s that followed it. This depression, according to Robertson, spelt the end of the era of ornamental cast iron use in architecture in Victoria. He went on to comment that, as fashions changed, in the 1920s cast iron came to be regarded as old-fashioned or worse. It was to counter this view and because of his resolve to record the beauty of decorative cast iron that he wrote Victorian heritage. 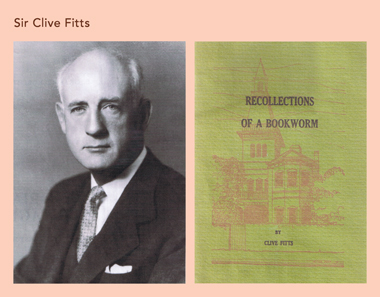 Clive Fitts was a chest physician and cardiologist. By his own account — and much of what he wrote was autobiographical — he was interested in books from a young age and became a keen book collector. He entered a medical course and, after a tussle with his examinations and failing a year, he graduated. “Perhaps”, he later remarked, “I was the first to demonstrate that the course needed lengthening”. Fitts later travelled to England, where he spent several years engaged in postgraduate study. After his return to Australia, he wrote about his years in England and his subsequent life as a physician in The house of medicine3 and Recollections of a bookworm.4 In the first, he stated:

I could not escape from the fact that I would have to speak about myself, as I know too little of any life but my own.

His writing was a means of examining people, events and ideas. His longest publication, Lines of communication, was, like much of what he wrote, delivered as an oration.5 In it he presented the history of the Stephen family, a number of whose recent members were Australians, as a means of examining the inheritance of intelligence. The book was loosely based on Hereditary genius (1869), by Charles Darwin’s cousin Francis Galton. Fitts’ point of entry to the family was Leslie Stephen, father of Virginia Woolf and the founding editor of the Dictionary of national biography (1885). Stephen, a pioneer of alpine climbing, also wrote The playground of Europe,6 in which he described some of his early climbs in Switzerland. Fitts came upon this book during a long English winter and found, to his delight, a description of the first ascent of the Zinalrothorn, a peak Fitts himself had climbed the previous summer. In Lines of Communication, Fitts wrote:

From this book [The playground of Europe] in which a man of letters described his leisure hours, there emerged the figure of one of the cultured and imaginative Englishmen who invented the sport of mountaineering. They were the first rebels against over organized games and holidays and against the restrictions that were being imposed on the spirit of adventure.

The history and literature of alpine climbing were continuing interests for Fitts, and he would occasionally quote the final words in Edward Whymper’s book Scrambles amongst the Alps.7 In its final chapter, Whymper recounts the first ascent of the Matterhorn and the disaster that occurred during the descent, when four of the seven climbers fell to their deaths. After noting the great joys of climbing, Whymper concludes his narrative with the words:

Do nothing in haste; look well to each step; and from the beginning think what may be the end. 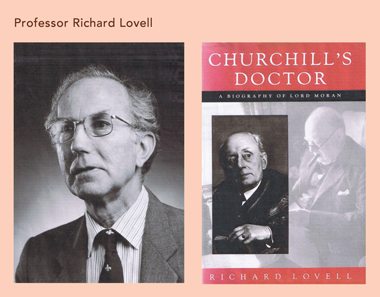 Richard Lovell was appointed the inaugural professor of medicine at the University of Melbourne in 1956. A graduate of London University, he trained at St Mary’s Hospital in London where he met two men who were to have an enduring influence on his life. The first, George Pickering, was head of the Professorial Medical Unit when Lovell rejoined St Mary’s after 5 years of service in the Royal Navy during the Second World War. Pickering became his lifelong friend and mentor. In Pickering’s unit, Lovell developed an interest in epidemiology, and this became a central aspect of his research. In Melbourne, Lovell established one of the best academic medical units in the country and made a considerable contribution to the advancement of Australian medicine. He wrote over a hundred papers on a wide range of medical topics, on many of which he was the sole author. He wrote with elegance, wit and precision. This was not surprising, as Fowler’s modern English usage and Brewer’s dictionary of phrase and fable were constant sources of reference for him.

Recurring themes in Lovell’s more general writing were those of leadership, how leaders are selected, the influence of medical incapacity on political leaders and the ethical responsibilities of their medical advisers. Leadership as a theme in Lovell’s writing stemmed in part from his naval service and in part from the second doctor who had influenced him at St Mary’s Hospital. This was Charles McMoran Wilson, later Lord Moran, who was indeed a remarkable man. In 1943, Wilson wrote The anatomy of courage, an account of his experience as a medical officer in the First World War.8 In it, Wilson described the effect over time of the appalling conditions on the Western Front on the men under his medical care. It is of interest that, as Lovell was later to report, Winston Churchill refused to write a preface for it on the grounds that the book would interfere with recruiting and, besides, he had “no patience with all that damned psychological nonsense”. After the First World War, Wilson, as Clinical Dean of St Mary’s Hospital, was responsible for reviving a flagging medical school, which he did with outstanding success. After the Second World War, by now President of the Royal College of Physicians of London and the leading medical politician of the day, Wilson played a key role in obtaining acceptance of the National Health Service by the medical profession in England. However, it was for his role as Churchill’s personal doctor during the greater part of the Second World War and his publication Winston Churchill: the struggle for survival, in 1966, that he is best remembered today.9 This book caused considerable controversy when it was first published, as Moran included details of Churchill’s health and illnesses during the time he was Moran’s patient.

It was a biography of Moran that Lovell chose to write after he retired from his Chair in Melbourne. Churchill’s doctor10 is one of the finest medical biographies of recent times. It lays out in meticulously researched detail the life of an able, courageous and complicated man, who undoubtedly had a great influence on many matters of high importance. In the preface, Lovell gave some background to his writing of the book.

When an octogenarian precipitates a controversy of the kind and size that Lord Moran did in 1966, all that went before may be dismissed if not forgotten. I set out to explore and record what went before, because much of it seemed still to have relevance for education, the design of health services and for notions of leadership. I wondered too what light this exploration might throw on the affair of the Churchill book. Lord Moran taught me, as a medical student, that you cannot really understand people until you have unravelled what we doctors call, in the context of our patients, the past history.

Lovell’s account, as one might expect of a skilled physician, is based on facts carefully marshalled and presented as far as possible in an objective manner. Like Victorian heritage, Churchill’s doctor serves as a window on a period in the previous century, but it deals with men and events rather than the beauty of our surroundings.

These three physicians wrote with insight and skill. Although publications related to their professional work were well known, what they wrote outside the medical field was probably more widely read and may well be better remembered. Graeme Robertson recorded with skill and artistry an aspect of the architecture of a past era that is an integral part of our heritage. He drew our attention to a beauty and balance in buildings we often see but do not notice. Clive Fitts, with grace and wit, wrote about a full life and about the people and events that influenced him. Richard Lovell drew attention to notions of leadership and to a leading doctor’s role in the changes that occurred in the teaching and practice of medicine during a period spanning two world wars.

The writings of these three doctors about matters outside the square of their professional work remain of interest today because of the light they shed on times of great change.

And not by eastern windows only,

When daylight comes, comes in the light ...

Portraits of the doctors were kindly provided by the Department of Medical Illustration at the Royal Melbourne Hospital. Dr N J McCarthy and Dr I R Mackay provided helpful comments in the preparation of this article. However, any errors it may contain are mine.