Liver abscess due to Klebsiella pneumoniae infection has been widely reported in Asia, but rarely reported in Australia until now. We describe four previously well Asian-born patients who presented across Australia with community-acquired K. pneumoniae liver abscesses. With prompt recognition, appropriate antibiotics and early drainage, outcome is significantly improved, although vigilance for metastatic complications is essential.

During 2008 and 2009, four patients (two men, two women) presented around Australia with community-acquired Klebsiella pneumoniae liver abscesses (KPLAs). All four patients were previously well and did not have diabetes. Patients 1, 2 and 3 were Australian residents who were born in Asia and had recently visited there; Patient 4 was visiting from China.

All patients presented to hospital after several days of gastrointestinal and other symptoms. Liver abscess was shown on computed tomography scans, and K. pneumoniae infection was diagnosed following culture of abscess fluid or blood. Patients were treated with appropriate antibiotics and pigtail catheters for drainage; Patients 3 and 4 required surgical treatment.

Patients 1, 2 and 3 were well at follow-up; Patient 4 returned to China and was lost to follow-up. Patient 3 suffered a recurrence about 10 months after her first presentation, but this was too remote to be clearly attributable to her short course of antibiotics (only 10 days).

Box 1 summarises the clinical and microbiological details of the four patients.

A community-acquired Klebsiella pneumoniae primary invasive liver abscess syndrome has been recognised in Asia for more than 20 years, with almost 1000 reported presentations published by 2008; it has been reported less frequently in other regions.1 K. pneumoniae infection accounted for over 80% of primary liver abscesses reported from Taiwan in the 1990s.2 Increasingly, cases have been seen outside Asia, primarily among patients of Asian ethnicity, including in the United States.1,3 It has only rarely been reported in Australia until now.4,5

Of interest are an absence of prior hepatobiliary disease, an association with diabetes, and a risk of metastatic spread.6 Community-acquired KPLA has been associated with severe metastatic complications, including endophthalmitis.

The reasons for the changing epidemiology away from Escherichia coli as the leading cause of pyogenic liver abscess are unclear, although selective pressure for Klebsiella through widespread amoxicillin use, to which it is almost universally resistant, has been postulated.7 A genetic predisposition is possible, given the disease is seen almost exclusively in patients of Asian ethnicity, even outside Asia, and very rarely in those of Caucasian origin.8,9

K. pneumoniae is frequently found as part of normal faecal flora, and spread to the liver is thought to occur from the intestines via the portal system.1 Ordinarily, any bacteria reaching the liver would then be phagocytosed and killed, and failure of this defence is presumed to lead to the formation of liver abscesses.1 Diabetes was present in about 50%–70% of patients reported from Taiwan,6 presumably conferring susceptibility by impairing neutrophil-mediated defence,10 and this also appears to be a risk factor for metastatic complications.6 It is interesting to note that none of the patients in our small sample had diabetes.

Bacterial virulence is also of major importance, as the condition often affects previously healthy individuals. The presence of capsular polysaccharides of K. pneumoniae serotype K1 or K2 has been strongly associated with virulence through resistance to phagocytosis;10,11 our patients were all infected with one of these two serotypes.

Commonly, K. pneumoniae strains causing liver abscess are hypermucoviscous, as defined by an unusual, highly mucoid colony appearance on culture, a feature strongly associated with the K1 or K2 serotype.11 This stickiness is the basis of the “string test”, which can be performed easily in the laboratory. The string test is a quick, useful investigation in this setting (Box 3).7 A colony that stretches more than 5 mm using a standard inoculation loop tests positive for hypermucovisosity.3

The geographical distribution of KPLA may be explained by the finding that K. pneumoniae isolates from Taiwan were far more likely to have a hypermucoviscous phenotype and to belong to K1 or K2 serotypes than those in other countries except South Africa, where invasive disease is also seen.12 Indeed, of the many K. pneumoniae capsular serotypes isolated from patients in an Australian tertiary hospital inpatient setting, K1 and K2 accounted for only 10 of 293 (3.5%) presentations.13

All our patients had recently been in Asia, which raises the possibility of exposure to these virulent strains of the organism. However, case reports from the US have involved emigrants from Vietnam and Korea who had not travelled home for some years.1

A third-generation cephalosporin such as ceftriaxone is usually an effective treatment, with good penetration of vitreous fluid and cerebrospinal fluid, allowing it to reach metastatic lesions in these locations.12 In the case of endophthalmitis, systemic antibiotics should be combined with intravitreal injections. Treatment is required until clinical state, biochemistry and radiology indicate resolution, often requiring antibiotics for 4 to 6 weeks.

Another mainstay of therapy is computed tomography- or ultrasound-guided percutaneous abscess drainage. Surgical drainage may be necessary when percutaneous techniques have failed, as was seen in our Patients 3 and 4.

Metastatic spread not uncommonly complicates KPLA; reports from Taiwan estimate the frequency of this at between 3.5% and 20%.12,14 Endophthalmitis, lung abscesses and meningitis are the more common complications. Ophthalmological and other organ review is therefore indicated when KPLA is diagnosed. Visual recovery in patients with endophthalmitis is often poor; a high index of suspicion and early intervention before visual changes are noted may improve outcome.

Response to antibiotics and drainage is generally good. In contrast with patients with underlying biliary tract disease, long-term recurrence rates in patients with spontaneously occurring liver abscess appear to be low.15

Given the emerging global trend of K. pneumoniae liver abscesses, Australian clinicians should be mindful of this condition, particularly, but not exclusively, in patients of Asian origin with abdominal infection or whose cultures reveal this organism. In this setting, a hypermucoviscous isolate of K. pneumoniae may belong to serotype K1 or K2, and be associated with metastatic infection, particularly endophthalmitis, lung abscess and meningitis. 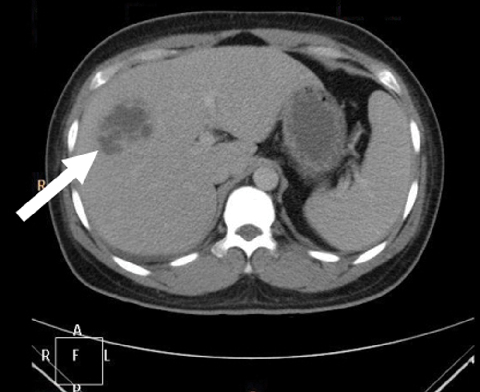 We thank Kerrie Stevens of the Microbiological Diagnostic Unit Public Health Laboratory, University of Melbourne, for performing serotyping of the above four isolates.