Main outcome measures: The amount, by number and weight, of unsolicited mail items, and the proportion of each document read, in total and by category.

Results: 196 items of unsolicited mail, weighing 19.85 kg, were received over a period of 7 months. The category with the largest number of mail items was pharmaceutical company correspondence (70; 36%), closely followed by medical tabloids and free journals (67; 34%). Medical tabloids and free journals made up the largest proportion of unsolicited mail by weight (15.49 kg; 78%). Of all 196 items, only 10 (5%) had more than half of their content read.

Conclusions: Although small in size, this study suggests that a reduction in unsolicited mail to general practitioners in Australia would have benefits for GPs in terms of time management, environmental benefits, and reduction in frustration levels.

Reduction of unsolicited mail has been suggested as a way of improving the contribution of general practice in Australia to environmental sustainability.2

We have experienced frustration associated with unsolicited mail: A T through receiving it; R P through hearing A T complain about it; and D B-G through having to carry the mail to the recycling bin.

We aimed to assess the types of unsolicited mail received by one Australian general practice registrar, in terms of both total quantity and the proportion read.

The study participant was a female general practice registrar employed to work five sessions each week in a private general practice located in Charters Towers, north Queensland. At the time of the study, she was also undertaking an academic general practice post as part of her training, and from March to May 2010 studied for fellowship examinations.

The study participant collected all mail addressed directly to her that was received at her practice address over the 7-month period from 1 March to 30 September 2010. Any solicited mail (eg, journals for which the participant had initiated a subscription) was excluded from the study.

Collection of unsolicited mail had initially commenced on 1 February 2010, but we identified that the collection process was compromised. Practice administration staff had been discarding some unsolicited mail, rather than delivering all mail to the participant’s in-tray, with the aim of reducing her workload. Administration staff were subsequently advised to place all directly addressed mail in the participant’s in-tray, and a sign reminding staff to do this was placed on the in-tray.

As the participant cleared her in-tray, she marked on each item of mail the action taken with it as:

She then placed all eligible mail in a cardboard box in her office.

At the completion of the collection period, each piece of mail was read by at least one of us, and we developed a coding schema using a simplified inductive thematic qualitative method.3 We then re-read and categorised each document. Data on the initial action taken with each piece of mail were compiled and analysed using simple descriptive statistics. 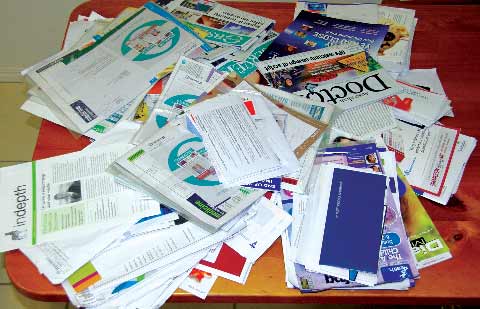 After initial qualitative analysis of the mail items, we agreed on the following coding groups:

In our study, the participant considered only a small proportion of pharmaceutical company correspondence, such as safety updates or information regarding new products, to be important for her clinical practice. It is concerning that, with the large amount of mail received, practitioners may not read important communications such as changes to safety warnings for pharmaceutical products.

Our results suggest that Australian GPs receive significantly fewer unsolicited mail items than some practitioners in the US. Assuming that a similar amount of mail arrives each month, we estimate that our participant would receive 34 kg over a 12-month period, compared with the 122 kg received by an emergency medicine physician in San Francisco in 1999.1

Our study had several limitations. Its small sample size of one participant may limit the generalisability of our results. Practitioners may value different information, and the proportion of mail read might therefore differ substantially between practitioners. Further, practitioners may receive differing amounts of mail. Also, the participant was studying for fellowship examinations for the first 3 months of the study and it is possible that her well honed procrastination skills may have resulted in a larger-than-usual amount of unsolicited mail being read (and might even have been the stimulus for commencing the study).

We believe that A T’s level of frustration with mail would be significantly reduced if a reduction in unsolicited mail occurred.

Categories of unsolicited mail, by number of items, weight and action taken