Since the first successful application of the heart–lung machine in 1953, extracorporeal technology has continued to evolve.1 Using extracorporeal membrane oxygenation (ECMO), it is now possible to support patients for days to months while injured tissues recover. ECMO involves the oxygenation of blood outside the body and can provide complete or partial support of the heart and/or lungs as a therapy for patients whose condition is refractory to other management (Box 1). A basic ECMO circuit consists of vascular cannulae to access and return blood, circuit tubing, a pump, a gas-exchange device (oxygenator), and a heater or heater–cooler that maintains blood temperature via the oxygenator (Box 2). An international registry maintained by the Extracorporeal Life Support Organization (ELSO) recorded 2321 cases of ECMO support during 2008, and a total of 40 195 patients supported with ECMO to July 2009.2

In the past, the provision of ECMO was limited by a lack of adequately qualified medical, nursing and perfusion staff, the availability of ancillary services such as echocardiography, and concerns regarding safety and efficacy.3 However, training enabling intensive care staff to incorporate ECMO into their scope of practice has now been established in Australia. The therapy is currently offered in most Australian states and in New Zealand, and is internationally accepted as being useful in severe but potentially reversible respiratory or cardiac failure.

Here, we review the major ECMO modalities, the indications of each, the evidence that supports the use of ECMO, and safety issues associated with ECMO.

The manner in which an ECMO circuit interacts with the patient’s circulation defines its modality as venoarterial (VA) or venovenous (VV).

VA ECMO involves the oxygenation of blood drawn from the venous system and its return into the arterial circulation, providing complete or partial cardiac support in addition to gas exchange. Cannulation for VA ECMO can be established centrally during cardiothoracic surgery, or peripherally by using a surgical cut-down or percutaneous dilatational (modified Seldinger) technique; there are several differences between these two options (see Box 3). With central cannulation, blood is drained directly from the right atrium and returned to the proximal ascending thoracic aorta. With peripheral cannulation, blood is drained from the proximal great veins (via a femoral or jugular vein) and returned to the aorta via cannulation of a carotid, axillary or femoral artery (Box 4). Femoral cannulation is most commonly employed in adults as the compressible site assists in haemorrhage control; however, these vessels are typically too small for cannulation in neonates. Twin drainage cannulae (jugular and femoral) may be inserted to augment circuit drainage when a high ECMO flow rate is required.

In VV ECMO, drainage and return cannulae are positioned in the venae cavae. This technique can provide either complete or partial support of the lungs when cardiac output is sufficient. Vascular cannulae are introduced peripherally via the jugular or femoral vessels (Box 4), and additional drainage can be obtained by using a second cannula to draw from both venae cavae. VV ECMO can also be delivered using a single double-lumen cannula inserted via the internal jugular vein into the right atrium, although cannula size constraints have previously restricted this technique to infants.4 Larger percutaneous double-lumen cannulae are currently being considered for clinical use in adults (Avalon Laboratories, Los Angeles, Calif, USA).

Until the early 1980s, VA ECMO was predominantly used in respiratory failure. However, VV ECMO is now the preferred modality for isolated respiratory disease because it provides oxygenated pulmonary blood flow, maintains systemic pulsatile flow, and avoids the risks of arterial cannulation (such as systemic arterial embolisation).

VA ECMO support is appropriate for managing patients with severe cardiac failure, whose condition is refractory to other management strategies (such as intra-aortic balloon pumps), and patients with intractable, in-hospital cardiac arrest (Box 5). In these settings, ECMO can prevent end-organ damage, prevent further cardiac damage due to shock, enable timely decisions regarding the diagnosis and treatment of underlying conditions, and facilitate selection of the most appropriate clinical end point. ECMO may be used as a rescue therapy in patients with reversible disease aetiologies, or as a bridge to heart transplantation or ventricular assist device insertion. In patients who cannot be weaned from bypass after cardiac surgery, ECMO can provide support until the recovery of heart function. Use of ECMO for cardiac support after heart transplantation is well established, and relied upon in cases of primary graft failure — which are more likely with recent trends such as the use of donor tissue with long ischaemic times.5 It should not be offered to patients who are unlikely to recover cardiac function and who are not suitable for ongoing mechanical support or heart transplantation.

Following the first successful reported use of ECMO in 1971, clinical research to justify the use of this invasive technique has advanced intermittently, and has involved unique trial designs and ethical considerations related to clinical equipoise.6,7

Data from four randomised controlled trials support the use of ECMO in neonatal respiratory failure.8-12 The first adopted an unorthodox “play-the-winner” design: neonates with severe respiratory failure had a probability of being randomly assigned to the intervention or control arms that was influenced by the outcome of the preceding patients in each arm. With the survival of the first patient, who was assigned to the ECMO group, and the death of the second patient, who was assigned to the control group, 10 subsequent patients were randomly assigned to receive ECMO therapy and survived, leading to the conclusion that ECMO provided a survival benefit (P = 10-8).7,8

Despite the theoretical validity of this trial design, the uneven distribution of patients invited considerable scepticism, and more conventionally randomised controlled trials followed.9-12 The largest of these demonstrated that, in 185 neonates with severe respiratory failure, referral for ECMO (VA or VV) conferred a relative risk of death before 1 year of age of 0.55 (95% CI, 0.39–0.77),12 and data from follow-up studies suggested that an advantage in terms of death or disability persisted at 7 years.13

A subsequent meta-analysis reported an increased survival for neonates with severe respiratory failure who are supported with ECMO. Relative risk of death before discharge was 0.44 (95% CI, 0.31–0.61) for neonates receiving ECMO compared with those receiving conventional mechanical ventilation, or 0.33 (95% CI, 0.21–0.53) when neonates with congenital diaphragmatic hernia were excluded.14

No randomised studies of ECMO for respiratory support in children have been published, although a retrospective multicentre analysis of 29 ECMO patients with one or two matched controls revealed a significant reduction in mortality for children supported with ECMO compared with those who received conventional support (26% v 47%, P < 0.01).15

The history of research into ECMO use in adult respiratory failure reflects the challenges of studying new invasive technologies. A prospective multicentre randomised controlled trial conducted between 1974 and 1977 showed no survival benefit above conventional management,16 “effectively stopping research on ECMO for adult respiratory failure for the next 15 years”.7 Owing to the use of VA ECMO, the overly inclusive selection criteria, and inexperience of the researchers with the technology, it is now widely acknowledged that this study no longer has clinical applicability.17 Widespread interest in ECMO in adult respiratory failure was revived in the late 1980s, when the significance of ventilator-induced lung injury was identified.18

A study of a low-flow form of VV ECMO for extracorporeal carbon dioxide removal (ECCO2R) in combination with lung-protective ventilation showed promising but uncontrolled results in patients with respiratory failure. In patients with a 90% mortality risk before the commencement of extracorporeal life support, treatment with ECCO2R and “rest ventilation” was associated with 48.8% survival.19 However, a subsequent randomised controlled trial evaluating this technique in 40 patients with acute respiratory distress syndrome revealed no 30-day survival benefit for patients receiving ECCO2R compared with those receiving conventional mechanical ventilation.20 Although a high rate of haemorrhagic complications and inexperience of the researchers with extracorporeal support were blamed for the trial’s negative results, ECCO2R was largely abandoned.21

Centres with staff experienced with ECMO continued to offer high-flow ECMO (providing full oxygenation) as respiratory support for adults, and soon began to demonstrate survival rates exceeding 50% for patients likely to die if given conventional treatment.22-24 These results have been attributed to strict selection criteria (including restrictions regarding prior mechanical ventilation), the use of VV ECMO, and minimal concurrent ventilation.

Success with the use of ECMO at various institutions has culminated in the recent conclusion of a randomised controlled trial of ECMO for adult respiratory failure. The Conventional ventilation or ECMO for Severe Adult Respiratory failure (CESAR) trial enrolled 180 patients aged 18–65 years from 2001 to 2006.21,25 Patients were randomly assigned to be referred for ECMO at Glenfield Hospital (Leicester, United Kingdom) or to receive conventional treatment (typically at the referring hospital). Promising results from this trial have been presented and are pending publication (Peek GJ, presentation at Extracorporeal Life Support Symposium, Melbourne, 29 May 2008).

As no controlled studies of ECMO use in cardiac failure have been conducted, an analysis of registry data provides the best indication of the performance of ECMO for cardiac support. Aggregate data from the ELSO registry to July 2009 suggest that for neonatal (age 0 to 30 days), paediatric (age 31 days to < 16 years) and adult (age 16 years or over) patients receiving ECMO, survival to discharge or transfer was 38%, 46% and 35%, respectively, per period of support.2 In 2008, survival in these groups was 43%, 54% and 35%, respectively, despite a perceived increase in the severity of illness in supported patients over time.2 However, these data are difficult to interpret in isolation, the adult dataset is limited, and ongoing evolution of the indications for ECMO restricts the use of historical controls. In addition, for various reasons, ELSO aggregate data are skewed to reflect the support of patients with congenital defects, who exhibit higher mortality rates than most other patients in whom ECMO is indicated. The highest survival rates were observed in neonates with cardiomyopathy (63%) and older patients with myocarditis (66%).2

Significant adverse events and potential complications can occur during extracorporeal life support (Box 6). These are becoming less common and less severe with increasing experience and major technological developments, such as heparin-bonded circuitry to reduce anticoagulation requirements and back-perfusion cannulae that provide arterial supply to cannulated limbs to prevent ischaemia (Box 7). It is generally thought that complication rates are reduced in specialist ECMO centres that deal with larger numbers of patients and have greater access to resources such as perfusion services.

ECMO as a technology for the support of critically ill patients has dramatically changed in the past two decades. It has become a widely accepted rescue therapy for severe respiratory or cardiac disease that is refractory to other management. However, except in the field of neonatal respiratory support, evidence supporting the use of ECMO is limited, and more research is needed. Publication of the CESAR trial results are likely to facilitate additional research and use of the technique by raising clinicians’ awareness of the technology, and Australian studies of extracorporeal life support are currently being planned. An awareness of ECMO by non-intensive care staff should also help facilitate better communication between health care teams and improve patient recovery.

A previously healthy 18-year-old man was admitted to a private metropolitan hospital with acute respiratory failure that was presumed to be caused by an infection. After 4 days of treatment with broad-spectrum antibiotics and ventilatory support (including high-frequency oscillatory ventilation and inhaled nitric oxide), the patient’s respiratory function continued to decline and he was placed on femorofemoral venovenous ECMO support and transferred to a quaternary hospital. A chest x-ray (Figure) showed no normally aerated lung, and tidal volumes during conventional ventilation were less than 50 mL. Subsequent insertion of a second drainage cannula in the right internal jugular vein facilitated full respiratory support at ECMO flow rates of 6 L/min. Mycoplasma was identified as the causative organism, and the patient was discharged with good lung function after 32 days of ECMO and a 45-day stay in the intensive care unit that was complicated by hospital-acquired sepsis. 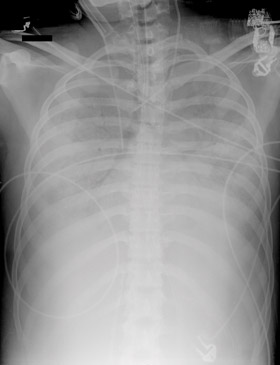 2 Extracorporeal membrane oxygenation circuit in use 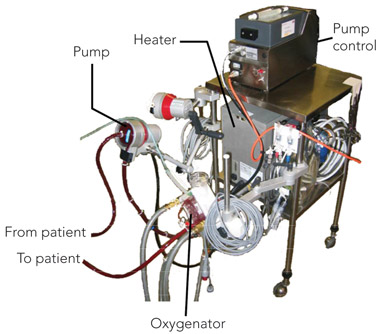 4 Examples of cannulation for venoarterial (VA) and venovenous (VV) extracorporeal membrane oxygenation (ECMO), and circuitry used for both